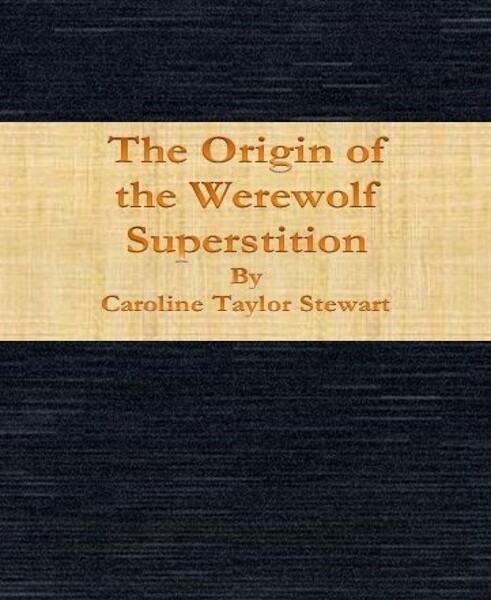 The Origin of the Werewolf Superstition

THE ORIGIN OF THE WEREWOLF SUPERSTITION.1

The belief that a human being is capable of assuming an animal’s form, most frequently that of a wolf, is an almost worldwide superstition. Such a transformed person is the Germanic werewolf, or man-wolf; that is, a wolf which is really a human being.2 So the werewolf was a man in wolf’s form or wolf’s dress,2 seen mostly at night,3 and believed generally to be harmful to man.4

The origin of this werewolf superstition has not been satisfactorily explained. Adolf Erman5 explains the allusion of Herodotus6 to the transformation of the Neurians (the people of the present Volhynia, in West Russia) into wolves as due merely to their appearance in winter, dressed in their furs. This explanation, however, would not fit similar superstitions in warm climes. Others ascribe the origin of lycanthropy to primitive Totemism, in which the totem is an animal revered by the members of a tribe and supposed to be hostile to their enemies.7 Still another explanation is that of a leader of departed souls as the original werewolf.8

The explanation of the origin of the belief in werewolves must be one which will apply the world over, as the werewolf superstition is found pretty much all over the earth,9 especially to-day10 however in Northwest Germany and Slavic lands; namely, in the lands where the wolf is most common.11 12 According to Mogk13 the superstition prevails to-day especially in the north and east of Germany.14

The werewolf superstition is an old one, a primitive one.15 The point in common everywhere is the transformation of a living human being into an animal, into a wolf in regions where the wolf was common16 into a lion, hyena or leopard in Africa, where these animals are common; into a tiger or serpent in India;17 in other localities into other animals characteristic of the region.18 Among Lapps and Finns occur transformations into the bear, wolf, reindeer, fish or birds; amongst many North Asiatic peoples, as also some American Indians, into the bear; amongst the latter also into the fox, wolf, turkey or owl; in South America, besides into a tiger or jaguar, also into a fish, or serpent. Most universal though it seems was the transformation into wolves or dogs.19

As the superstition is so widespread—Germany, Eastern Europe, Africa, Asia, America, it either arose at a very early time,[6] when all these peoples were in communication with each other20 or else, in accord with another view of modern science, it arose independently in various continents in process of the natural psychical development of the human race under similar conditions.

The origin of the superstition must have been an old custom of primitive man’s of putting on a wolf’s or other animal’s skin21 or dress, or a robe.22 Thus Leubuscher,23 says: “Es ist[7] der Mythenkreis eines jeden Volkes aus einfachen wahren Begebenheiten hervorgewachsen.”24 25 Likely also the notion of attributing speech to animals originated from such disguising or dressing of men as animals. In the following we shall examine into primitive man’s reasons for putting on such a skin or robe.

Primitive man was face to face with animal foes, and had to conquer them or be destroyed. The werewolf superstition in Europe arose probably while the Greeks, Romans, Kelts and Germanic peoples were still in contact with each other, if not in the original Indo-Germanic home, for they all have the superstition (unless, as above, we prefer to regard the belief as arising in various localities in process of psychical development under similar conditions; namely, when people still lived principally by the chase.26) Probably the primitive Indo-European man before and at the time of the origin of the werewolf superstition, was almost helpless in the presence of inexorable nature. This was before he used metal for weapons. The great business of life was to secure food. Food was furnished from three sources, roots, berries, animals, and the most important of these was animals.27[8] Without efficient weapons, it was difficult to kill an animal of any size, in fact the assailant was likely himself to be killed. Yet primitive man had to learn to master the brute foe. Soon he no longer crouched in sheltered places and avoided the enemy, but began to watch and study it, to learn its habits, to learn what certain animals would do under certain circumstances, to learn what would frighten them away or what would lure them on. So at least the large animals were to early man a constant cause of fear and source of danger; yet it was necessary to have their flesh for food and their skins for clothing.28

Very soon various ingenious contrivances were devised for trapping them. No doubt one primitive method was the use of decoys to lure animals into a trap. Some could be lured by baits, others more easily by their kind. Occasionally masks were used,29 and similarly, another form of the original decoy was no doubt simply the stuffed skin of a member of the species, whether animal or bird, say for example a wild duck.30 Of course the[9] hunter would soon hit on the plan of himself putting on the animal skin, in the case of larger animals; that is, an individual dressed for example in a wolf’s skin could approach near enough to a solitary wolf to attack it with his club, stone or other weapon, without exciting the wolf’s suspicion of the nearness of a dangerous foe.31 So the animal disguise, entire or partial, was used by early man acting in the capacity of a decoy, firstly, to secure food and clothing. Secondly, he would assume animal disguise, whole or partial, in dancing and singing; and both these accomplishments seem to have arisen from the imitation of the motions and cries of animals,32 at first to lure them, when acting as a decoy. With growth of culture came growth of supernaturalism, and an additional reason for acquiring dance and song was to secure charms against bodily ills,33 and finally enlivenment.34 In both dance and song, when used for a serious purpose, the performers imagined themselves to be the animals they were imitating,35[11] and in the dance they wore the skins of the animals represented.36

Probably as long as animal form, partial or entire, was assumed merely for decoys and sport (early dancing),37 for peaceful purposes therefore, such people having whole or partial animal shape were not regarded as harmful to man,38 just as wise women began to pass for witches only when with their art they did evil.39 A similar development can be traced in the case of masks.40 It was some time before man could cope with food- and clothing-furnishing animals that were dangerous to life, though these are the ones he first studied;41 and we cannot presuppose that he disguised to represent them until he could cope with them, since the original purpose of the disguise was to secure food and clothing. Thus far then we see whole or partial disguise as animals used to secure food and clothing when acting as decoys to lure animals; and in dancing.42

[12] Fourthly, primitive man would put on an animal’s skin or dress when out as forager (or robber) or spy, for the purpose of avoiding detection by the enemy. The Pawnee Indians for example,43 were called by neighboring tribes wolves, probably not out of contempt, since it may be doubted that an Indian feels contempt for a wolf any more than he does for a fox, a rabbit, or an elk, but because of their adroitness as scouts, warriors and stealers of horses; or, as the Pawnees think, because of their great endurance, their skill in imitating wolves so as to escape detection by the enemy by day or night; or, according to some neighboring tribes, because they prowl like wolves44, “have the endurance of