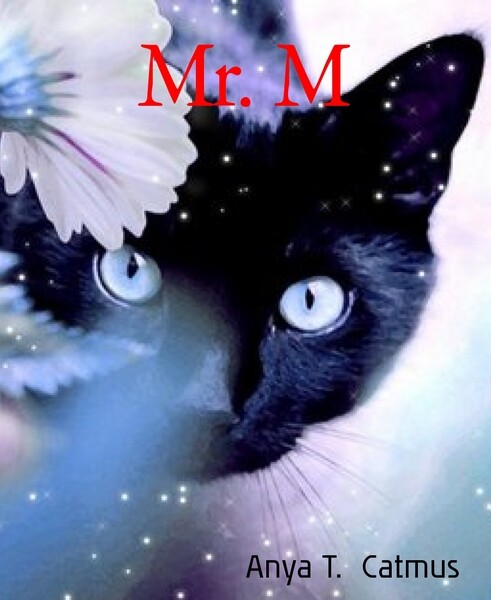 Mark padded on silent feet through the grass and flowers. At the end of the flowerbed, he stopped and peered from among the daisies. The couple stood in the dark as a cover of clouds obscured the moonlight. He didn't need the light to show him what was happening. His feline vision made it easy for him to see in the darkness. And what he saw had the hairs on his back stand on end and his tail flickering back and forth with a mixture of annoyance and jealousy.

A man had his arms around a woman. Mark's woman. He tilted her chin up and they stared at each other for a moment. Slowly, the man lowered his head.

Mark's back arched as a growl escaped his throat. The woman jumped, startled and looked in his direction. Her eyes met his yellow ones before the woman lowered her gaze, as though she felt ashamed for having been caught in another man's arms. But that was his imagination playing tricks. She had no idea that the large, black cat who lived with her was more than just a normal animal. However, the woman extricated herself from the arms of the other man. She whispered something even Mark’s acute hearing couldn't catch and the man sighed. With a quick kiss on her cheek, he turned and walked back to his car.

Mark waited until the sound of the engine faded away before he walked towards the woman, Tessa. She stood staring off in the distance, a small frown creasing her brow. He rubbed against her legs, and purred.

Tessa glanced down, then made her way towards a bench. As soon as she sat, Mark jumped on her lap. She stroked him from head to tail, ran her fingers into his tail's fur. "What am I going to do with you?"

He closed his eyes in pleasure and continued to purr.

"Jealousy doesn't become you, you know?" she continued. "You're too smart, too regal for such a thing. Also, if you're so jealous, why don't you do something?"

He froze under her touch. To her, he was just a cat. What did she expect him to do? He angled his head to look at her.

She laughed. "Don't give me that look. You know what I'm talking about." She lowered her voice. "I saw you last month."

Mark jumped off her lap, and onto the ground. He sat on his haunches and started to lick his paw, his demeanor one of total indifference. Inside though, he was quivering. What did she mean? What had she seen?

Tessa stared at him as though waiting for him to do something. When he kept licking his paw, she sighed. "I guess you want me to say it first." She stood up and knelt on the ground beside him. "I saw you, Mister M. I saw you shift into a man in the garden shed."

His heart jolted in his chest. It wasn't possible. In the two years he'd been with her, he'd been careful not to give himself away.

"I followed you one day," she said. "I was curious. You spend quite a lot of time in that shed. I thought there was a mouse or maybe another cat. What I saw, though, blew my mind. I never thought anything like that existed in real life." She paused, wrung her hands together. "Can you show me?"

Mark looked at her, and moved his head forward in a small nod. He moved a few steps away and shifted. A multicolored fog engulfed him and a second later, he stood before her on two legs. Naked.

She stood up slowly, her face aflame with embarrassment, but she didn't look away. Her mouth fell open as she stared at him in awe. "That was beautiful. What... who are you?"

Mark bowed, then crouched down to hide his nudity. Not for his sake, but hers. Being naked for him was as natural as breathing. "My name is Mark. I come from a race of shifter cats. My race has lived alongside humans from the beginning of time."

“From the beginning of time? How old are you?”

The question made him chuckle. “Not that old. I’m twenty-nine.”

"Why were you staying with me?"

"You showed me kindness when we met. I observed you while my leg healed from the wound. You looked lonely, so even after it healed, I remained with you. As months passed, I started to fall in love with you. I couldn't leave."

Her beautiful blue eyes, the shade of a spring sky, widened. "Why didn't you tell me?"

He sighed. "Our laws prohibit us from exposing our ability to humans. I was also afraid you'd throw me out if you knew what I was."

She gasped, outraged. "I would never have done something like that."

He straightened and moved toward her, grabbed her shoulders. "I wasn’t sure. Humans fear what they don’t understand. I was afraid you'd see me as a monster. I preferred to stay with you as a cat than not be with you at all."

She lowered her eyes to his chest and bit her lip. "You... you love me?"

His lips curved in a gentle smile. "I do. I've loved you for a long time. And I'm going to court you much better than those idiots you've dated in these past years."

He pulled her into his arms and captured her lips into a hot, possessive kiss, his body hardening against the softness of hers. Yes, Mark was going to make sure that she'd forget all the losers she'd been with. Starting now.