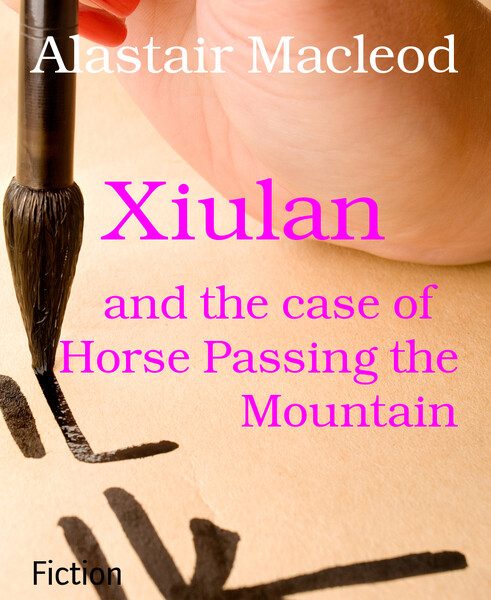 Xiulan and the case of Horse Passing the Mountain

“It is a partnership," said the young calligrapher, looking into her eyes, “Brush gently absorbs ink, ink flows from brush, letter is born.”

Xiulan knocked on her brother’s door.

“Wa,” came the muffled reply, coupled with the sound of the keyboard rattling.

Xiulan turned and looked out of the window; from this tiny appartment in her tower block, she could see others rising like asparagus stalks to the sky.

The sky; today it was blue, cloudless. The overnight storm had passed.

Her brother Chen was in the fourth year, doing computing and linguistics.

Her brother! The recluse, forever shut up in his bedroom.

He claimed he was completing his project for his thesis but he was doing other things.

She had watched her brother’s friends troop up to the appartment then also become closeted for maybe three hours at a time. Then a sign had appeared on the door, “Hangchow Hackers - no admittance.”

Xiulan was not a total computer whiz. She had to use them to study linguistics. Her course leader was new. He said all linguistics was moving digital.

Xiulan liked language and writing – and had done had from when she was a child.

She was a traditionalist, liking to write with a brush and to listen to poetry and sometimes to compose it, taking delight in a phrase or a rhythm in the words.

And she liked to hear and record different dialects.

She took after her mother.

Their parents were divorced. Both academics, her mother an English teacher at The Chinese University of Hong and her father a professor of linguistics at City University.

He was a powerful personality and had cajoled and persuaded both his children to do linguistics like himself in his department.

Chen became withdrawn, distant as well as resentful. He lost himself in computer games.

When the course became more computerized he thrived – the linguistics department was being funded by the state cryptography organisation. The course began to concentrate on text analysis.

Text was scrutinised and deconstructed for key words and style. The aims were to identify the person producing the text as well as to explore the content, hidden or unhidden. Chen took to the work like a duck to water.

He looked pale, drawn, his hair stuck up.

“Did you shower today?”

“Well do so after lunch,” she said firmly.

Xiulan had sniffed the male body odour but had made no comment. She knew her mother would be on his case.

“How is the project?”

“Good? Can’t you tell me a little more? This course is costing the earth and you can’t even be bothered to keep me informed?” Said mother.

“I’m in line for a job with the ministry of information on a big time salary.”