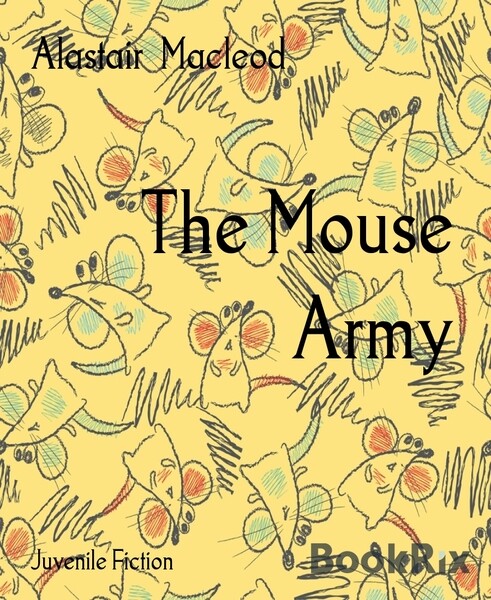 Once upon a time, a long time or a short time ago, there was a castle on the island of
Fionn-t-an-Eilean, the island of white mist in Loch of Tromlee, in Argyll.

One winter’s night, the chief of the McCorquodale’s was sitting at his dinner in the great hall of his castle. Logs blazed in the huge fireplace and fir branch torches hung from the stone walls.
Seated at the long table with him were his main men and often his harper would play a tune as they munched their way through some venison or salmon.

As they sat at table a guard came in with a strange announcement; an army was approaching, an army of mice.
The chief got to his feet and with his men went to the battlements.

In the dim light of the moon he could see below him the glitter of hundreds of tiny spears and the moon reflected in hundreds of little helmets and suits of chain mail.

A tiny squeaky voice shouted up,

“Surrender or we will attack.”

Some of the chief’s men laughed but the chief himself said,

“Send for the old wise woman, she will know what to do.”

Every castle used to have an old wise woman who knew almost everything about how the world worked.

“Take the castle cat and place him on the battlements.”

Well the castle cat was huge from all the titbits he was fed under the table. He had fearsome whiskers and hair that stuck out like the branches of a pine tree.

A brave soul grabbed him spitting and hissing and placed him on the battlements. When he looked down and saw the mice he began to walk up and down his tail in the air and his head high.

But the squeaky voice shouted up again.

"He doesn’t scare us, surrender or we will attack.”

“Send for the old wise woman again,” said the chief.

“Place the hawk on the battlements.”

Well, the hawk of the castle was a fearsome bird, feared for miles around by rabbits, hares and sparrows. He would swoop on them so fast they didn’t stand a chance.

The hawk was none too pleased to be taken off his perch and brought to the battlements. When they took his hood off he peered round him in the gloom. He could hear better then he could see in the darkness; night time was not his hunting time and he sat, his shoulders hunched, turning his head this way and that as he picked up the sounds of the mice army scraping below.

‘He doesn’t frighten us, surrender or we will attack.”

“Bring the wise old woman herself up here.”

She was brought to the battlements. She had grown shorter and more bent and stiff as she grew older but her eye was keen. She took in the cat prowling on the parapet and the hawk sitting silently twisting its head this way and that.

She peered down and surveyed the mouse army below. From her grey cloak she took out a cloth bag and a large basin. She placed the basin on the parapet,

“Bring me water,” she said.

Into the basin went the water and from the cloth bag she emptied white crystals into the water and mixed it with her bare hand. She began to mumble something, and then waving her hands over the basin, she cried out into the darkness beyond the parapet,

With that she flung the basin full of water over the castle wall, covering the mouse army below.

“Surrender, we’re not afr….”, the voice faltered then it seemed to freeze in mid sentence.

The chief and his main men looked down, the mouse army were not moving.

“Now,” said the old wise woman, “send out a child to bring back what he can find.”

The men looked at each other. A child?

“I will go,” said the chief’s son. They opened the castle gates just a crack and the boy ventured out.
Everyone held their breath as the boy disappeared into the darkness.

And it was true. Each one of the tiny warriors had turned to sugar. He returned with an armful and soon the people of the castle were munching in to sugar mice.

And some say that is how sugar mice came to be, what do you think?

Widmung:
A Story for Clan McCorquodale and their lost castle beneath Loch Tromlee, Argyll. And for Angus