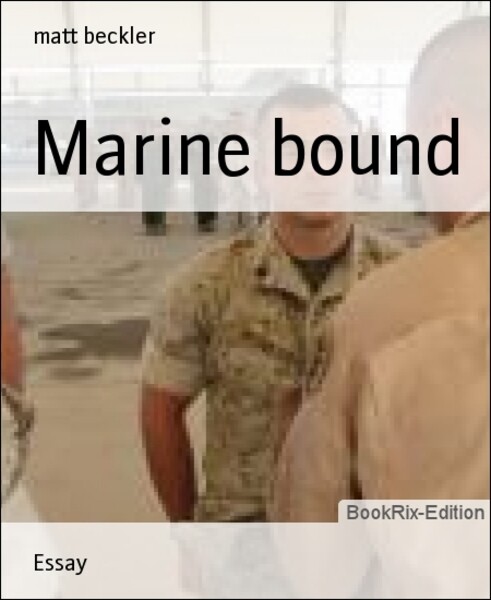 It was the summer of 2003; I had just graduated high school and was stuck with the decision of going to college or joining the United States Marine Corp. My Father, a former Marine told me to go to college, as he knew from experience how hard the Marines could be. I chose not to listen to him and to follow in his footsteps. I was soon about to experience the toughest challenge of my life.
On October 13th 2003, I said goodbye to my Parents and brother as they sadly hugged me and wished me luck. I boarded a plane from Denver Colorado headed straight to San Diego, where I would spend the next three months on Marine Corp Recruit Depot for boot camp. As I sat there anxiously waiting for the plane to land in San Diego, I was filled with emotions. One part of me was excited to finally get the chance to follow in my father’s footsteps and earn the title of Marine, the other part of me felt scared, not knowing what to expect, except for the horror stories that my father told me from his experience. I began to question whether I was doing the right thing or not. My stomach felt like it was tied in a million knots. What if I failed? What if I couldn’t handle it and was sent home? What would my family think of me then? The pilot told the flight attendants to prepare the cabin for landing, this was it. I took a deep breath and tried to clear my mind.
I exited the plane and was escorted by a marine liaison to the airport military lounge which was called a USO. When I entered the USO the marine liaison told me to take a seat and get comfortable, he told me that the marine drill instructors will arrive shortly to pick me up and take me to the depot where I would begin my training. I began to look for an open seat, as most of the seats were already occupied by others who were also going to boot camp. I decided to stand next to a group of guys that just graduated boot camp and earned the title. I started to ask one of the newly appointed marines how boot camp was. He took one looked at me and said, “Good luck, it was the hardest, most physically and mentally challenging experience I have ever faced.” Just then, a loud wind of voices came roaring through the door followed by 10 drill instructors. The drill instructors all started shouting for everyone to get outside. I started running, following the crowd out the front door of the USO. As one of the drill instructors started taking roll call, the others started yelling and screaming in all of our faces, telling us to board the buses and that we are now owned by the United States Marine Corps. At that moment I will never forget how bad my body began to shake with fear.
The first month of boot camp was complete hell, we were constantly getting screamed at. The drill instructors were there to break all of our old habits and break us down to our lowest possible point, and only then start molding us to the Marine Corps standard. Our 18 hour days consisted of doing physical training, drilling with our rifles, and getting punished by the drill instructors when we didn’t do what they wanted exactly how they wanted it. I felt like giving up during this first month, I really began to tell myself that I should have listened to my father and went to college.
During the second month of boot camp, I started learning what a team was all about. For all of us in my platoon it started to become we instead of I, or me. We were learning the routine, and realizing that as long as we worked together and performed to the highest standard, we were treated better. The stuff that I once thought was hard, such as the physical training and drilling all day on the parade deck was becoming easier. We were all becoming much stronger and physically able to endure the hardest challenges. During this second month I started to truly believe that I could do this. At night I would lay in the rack, visioning what graduation would be like, seeing my father amongst the crowds of people cheering, proud of his son for following in his footsteps.
The final month of boot camp we were starting to get treated like marines. I could see graduation just around the corner. Our platoon would spend hours getting ready for graduation and completing the final drill and fitness tests. We would show our drill instructors what we learned by passing all the required tests that were put in front of us.
On January 9th 2004, I held my head high in front of hundreds of proud family members. My senior Drill instructor stepped in front of me and told me to hold out my hand. He placed an eagle globe and anchor in my hand and said congratulations Marine. As a tear slowly crept down my face, it hit me, I did it, I completed the toughest challenge of my life yet, I am a United States Marine.