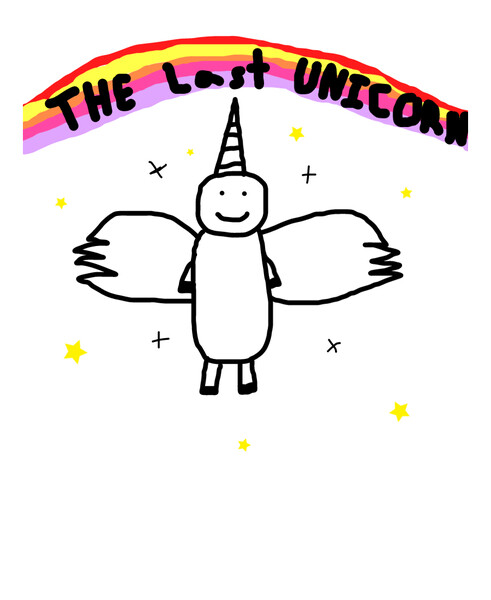 Once Upon a time in a far away land lived thousands of unicorns.  All the unicorns were pretty cowardly, they sat around all day saying “Mu Mu And Ja Ja and farted non-stop they roll their eyes and lick each others faces and are so fat  .  Expected for one, she was brave and smart and was different from her tribe .  Her name was peg.  Today is a special day everyone is going to The Games.  The Games is a place where unicorns go to have fun, The unicorns play Horn Ball (which is like baseball but instead of a baseball bat they swing their heads and hit the baseball with their horns and the ball is filled with air, sometimes they pop it. )

A black evil unicorn in a big plane arrived and started shooting the blimps down his name was Victor The Evil Genius, he was there to take all the unicorns and mind-control them with mind control helmets and make them his evil minions .  Everyone screamed and ran for their lives peg got in her unicar and drove off and tried to help by getting as many people in her car as she could.  But it was to late all the unicorns except the ones with peg were taken.  Victor and his plane crashed into peg’s unicar and peg was the only survivor.

Peg is all alone now no friends, no unicorns to find food and sell to eat, and all that was left was popped blimps and the unicorns stuff. She missed the constant farting and spitting.   Peg had to get her own food and strive.  She knew she had to do something so she set off away from The Land Of The Unicorns to find her tribe and bring justice.  She ran through forest and jungles starving and weak  but found didn't find her tribe.  She knew she had to look somewhere else.  She Said “Where could they be I searched everywhere except… The Tunnels! Yes! that's it that must be where victor’s hiding with the all the unicorns.” so she flew off…

She searched the jungles high and low, (It’s been a year now.)  She found a tribe of mice big and small she asked them if they saw her tribe, they squeaked and pointed to a long rainbow in the distance she said “There” the mice shook their head and ran off.  She walked up the long rainbow and saw a big swirling portal. In front of it was a big rhino guard, she suddenly jumped in a big bush hoping the guard wouldn't see her (Which he didn’t) she got out of the big bush and went from tree keeping her distance.  She got closer and closer to the rhino until she was spotted.  The big rhino guard ran up to her with his huge sword and shield trying to hit her but Peg was to fast and quick for him. She ran up took his sword and shield and whipped her tail into him until he became unconscious.  She walked into the portal with her new sword and shield spinning and flipping all around.  She finally got to The Tunnels.

Peg found herself lying on a smooth brick floor she look up and saw many tunnels with many doors then she looked back and saw the portal standing behind her.  She knew if the unicorns were there the portal would be her escape route.  All she could hear was the creaking of dropping water from the ceiling.  She flew from tunnel to tunnel door to door intel.. She found one big door.  This made her very curious so she opened the door and went inside.  This is Victor's lab she thought.  There she found Victor and her tribe.

Chapter Six: The Fight For Justice

All the unicorns were stacked on top of each other in a triangle shape with mind control helmets and big green swirling eyes.  And Victor was sitting in his big black chair with dark glowing eyes. He got up and yelled “get away from my minions or I’ll put you in jail for life!”  Peg ran up to him and held her new sword and shield tight.  He kept whipping his big black tail into her laughing a big long evil laugh, but did no harm because she was blocking his tail with her shield she suddenly struck Victor with her sword and stopped him.  She took of all the mind-control helmets and led them to the portal back to their home.

Everyone is now home and settled the sun was shining and there was food again.  But most importantly they were safe from Victor The Evil Genius.