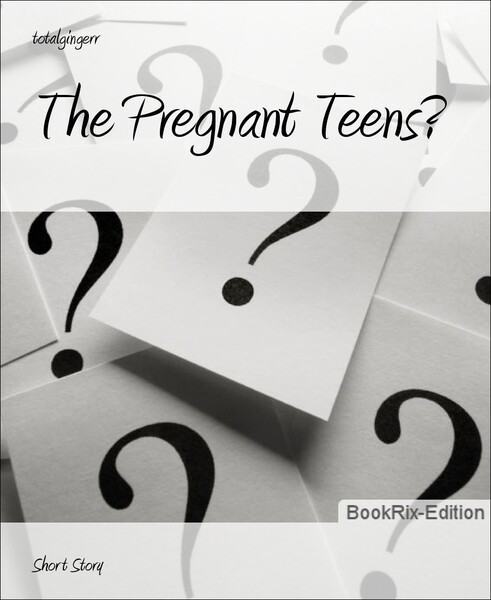 It all works out, right?

I never thought in a million years that this would happen. I looked at the tiny piece of paper that was in my hands and gawked in disbelief. This news was pretty close to insanity. I thought I couldn’t. I mean, that’s what the doctor said. But I guess you can’t believe everything the doctor tells you, can you? Apparently not… because I was pregnant. And I knew it wasn’t going to be easy.
My first instinct was to call Scarlet, and let her know that I had a baby growing inside of me. She would probably freak out, considering I’ve told her many, many times that I would never get pregnant and have a baby. So this phone call to her wasn’t going to be a pretty one.
Ring, ring, ring.
“Hello?”
“Hey Scarr. What’s up?” I asked my voice kind of shaky.
“Nothing much, just sitting at home. What about you?”
“Actually standing outside the clinic.” I hesitated.
“Why? Are you okay?” she asked, worried.
“Yeah, I guess I’m fine. I need to explain something to you though, and please don’t be angry.” I was almost in tears.
“You’re pregnant.” She stated.
I paused for a few seconds. “Yes.”
“Oh how did I know that?” she sounded kind of mad. And I expected that.
“Please don’t be mad, I didn’t mean for it to happen Scarr. I’m freaking out too. I don’t know what to do.” I started to cry.
“Hey Sophi, don’t cry. I’m not mad. Guess what?”
“What?”
“I’m pregnant too.” This was the last thing I ever expected her to say.
“Really?” I asked questionably.
“Yeah, I found out yesterday.” She sounded as though she was freaking out.
“Well, isn’t this ironic?” I started to giggle.
Scarlet started to hysterically laugh. “Yeah, it is!”


See, I told you it wasn't thaaaat bad!

We ended out conversation to tell our boyfriends and hope that they wouldn’t freak out as much as we had for a while. I didn’t think that Kammi, Scarlet’s boyfriend, would freak out as much as Kyle, my boyfriend. Kyle didn’t take serious important things all that well and this would probably give him a heart attack. I hated to tell him, but obviously I had too. I couldn’t keep this from him forever. I felt as though my heart had sunk deep down into my stomach and that I was going to throw it up.
I was still standing in the clinic’s parking lot when I decided that I needed to go home. Oh this was going to be one hell of a day. I couldn’t believe Scarlet was pregnant! I found myself searching the sky for flying pigs. I suddenly couldn’t wait to tell Kyle that Scarlet was pregnant also. That, I could handle telling him. Why? I guess because it was someone else who was pregnant and not me. I was still freaking out from finding out that I was pregnant. I couldn’t believe it; my doctor told me that I wasn’t able to have children. He was definitely wrong.
The walk to my car was an intense one. Just thinking about telling Kyle was killing me. My heart beat faster and faster with each step. Hopefully, he wouldn’t take it hard, easily would be better on me. Less stress and I wouldn’t have to worry about having to take him to the hospital for a heart attack.
I pulled into the driveway of my home, Kyle was waiting outside for me. He smiled big and waved. I smiled back in hopes that he would figure out it was a nervous one. I got out of the car, shut the door and walked to my fate.
“Hey baby.” Kyle smiled and kissed me on the cheek.
“Hey… you…” my voice was hesitant.
“You look pale, are you alright?” he asked.
“I don’t look as pale as you are going to when I tell you what I found out today.” I had him sit down on the bench.
“Uh-oh. What happened?”
“Ugh, I don’t know how to tell you.” I stated.
“I hate it when you don’t tell me things, so spit it out. It can’t be that bad.”
Oh, he had no idea.
“Alright, but don’t freak out. Kay?” I asked of him. Hopefully he would agree.
“I’ll try not to, just tell me.”
“Okay…whew… I’m…preg…nant..?” I stuttered.
I looked at Kyle closely, studying his every move. He didn’t look as though he was going to pass out. He looked like he was turning just a tad pale, though.
“Honey, are you okay?” I asked, looking into his eyes.
“You’re… you can’t be… doctor said –”
“The doctor said wrong, obviously. Look. I have the test paper.” I quickly dug through my purse to find it, and handed it to him.
He stared at the piece of paper that said positive, with his mouth gaping open.
“Kyle, speak. Say something. Please.” I asked.
“I don’t know what to say Sophi… I’m happy, I really am. But I’m scared too. Y’know? I don’t know what to expect; what to do. I don’t know if I can be a good father.” He said, his voice squeaking.
“I know Kyle. I’m scared too. But this is normal, not knowing what to do is expected for new parents. But baby, that’s what we are. We are going to be parents. It’s kind of exciting.” I tried reassuring him.
He smiled at me, and all my fears seemed to melt away.
“I love you Soph.” Kyle took my hand, kissed it, and then kissed me softly.
“We’ll make this work somehow, I swear.”
“I love you too.” I smiled at him and nuzzled into his shoulder.
Soon after mine and Kyle’s romantic moment, Scarlet was blowing up my phone. In that instant, I realized I forgot to tell Kyle that Scarlet was pregnant also. I quickly answered Scarlet’s phone call, because I was anxious to hear what she had to say.

“Tell me EVERYTHING!” I answered.
“Meet me at the park, Kammi and I are here. I’ll tell you what went down. Bring Kyle! Have you told him yet?”
“Ha, yeah I told him, but not about you. Did you tell Kammi about me?” I asked.
“No.” she giggled.
“Oh this should be very interesting.” I said in my poor-imitation-of-Velma-from-Scooby Doo voice.
“See ya when you get here.” Scarlet stated.
“Mkay!” and I hung up the phone.
Almost immediately Kyle spoke and was asking a million and one questions. What did Scarr want? Tell me what? What’s going on Soph? He just kept on and on and on.
“Kyle. Chill out. We’re going to the park to meet up with Scarr and Kammi. Keep quiet till we get there, kay?” I smiled and kissed him on the cheek. “Let’s go.”
He humphed and he sighed, but he got over it. He would find out soon enough. Let’s see, what month was it? June? Oh well shit, I’d be due in March then. I wonder if it’ll be close to my birthday.
While I drove, I contemplated my due date and wondered if Scarlet would be due around the same time. Because we both found out that we were pregnant just a day apart.
This was all so ironic, and it was hard to wrap my mind around all the irony. Oh well, it would all fall into place sooner than I expect I suppose.
I pulled into the park’s parking lot, and quickly spotted Scarr and Kammi sitting on the playground up the hill. I smiled and waved to them, they saw me and Kyle and I started to walk towards them. When we got there, Scarlet got off the playground and skipped to hug me. I hugged her back tightly, and giggled. This was the first time we had seen each other since the news. Kyle and Kammi gave each other a manly hug and then stared at the two pregnant teens that were me and Scarr.
“Okay, so now we’re here. Will you please tell us what is going on?” Kyle announced.
“Okay, boys. Each of you knows something the other one doesn’t; and we are going to tell you.” Scarlet spoke and smiled at me.
“I’m pregnant.” Scarlet and I said at the exact same time.
Both boys gawked with their mouths wide open. Scarlet and I stepped towards them and pushed their jaws back up so that they wouldn’t drool on themselves.
“You’re pregnant too!?” Kammi exclaimed.
“Yep, found out today actually.” I smiled.
“And Scarr, you’re pregnant also?” asked Kyle.
“Yep, found out yesterday!”
Kammi and Kyle were still staring in disbelief at the two of us. I guess they couldn’t wrap their minds around it either.
“So you’re both pregnant at the same time? When are your due dates?” Kammi asked.
“March 16th.” Scarr and I said simultaneously.
We stared at each other, wide-eyed and laughed.
“This isn’t a coincidence anymore Scarlet. This is fate.” I said and turned to hug her tightly.
The rest of the day was spent discussing what our arrangements were going to be for the little ones. We thought of names, and decided that we all needed to make space in our houses. So the rest of the summer was going to be spent cleaning house. We also decided that our children were going to be the best of friends; exactly like Scarr and I.

“Kyle!” I yelled downstairs.
He came running upstairs in a worried state.
“What is it? Are you okay? What’s wrong?” he asked frantically.
“It’s time.” I said calmly.
Kyle knew exactly what I was talking about and rushed to get a bag and get me downstairs, so he could take me to the hospital.
Elsewhere…
“KAMMI, IT’S FUCKING TIME!” Scarlet yelled.
“Oh, oh, oh my god. Okay, uhm. What do you need, a bag of clothes? Baby clothes! Sheesh. Do we need the car seat yet?” Kammi was more frantic than Kyle was at this point.
Scarlet looked at him with the death stare and said very calmly; “Help me out of this bed and take me to the damn hospital. You can come back for the rest of the stuff later. The baby is coming Kammi.”
Back with me.
“Okay ma’am, one last push! Oh. I see the head. That’s it, you’re doing great.” As soon as the doctor said this, I felt my baby come out. I looked down and saw the bloodiest baby I had ever seen in my life.
“It’s a boy.” The doctor warmly smiled at me, and handed me my baby boy, Zachary.
In the next room, I could hear another woman giving birth. I heard the same things that were said to me, and then what startled me was that the woman that was giving birth had a baby boy also. I heard the woman’s voice, and I asked the doctor to pull back the curtain for a second. Sure enough, it was Scarlet! She had a baby boy too!
“Scar, what are you naming him?” I asked and smiled at her.
“Zerek.” She smiled at me and then at the little baby she was holding in her arms.
So in the end, Scarlet and I both had beautiful healthy baby boys, and everything was good. Kyle and I were over at Scarlet’s house all the time with Zachary. Zerek and Zachary grew up to be brothers whereas mine and Scarlet’s friendship kept growing and growing. Kammi and Kyle proposed to Scarlet and I on the same day and we all got married in one day. So I guess everything we do is ironic, huh?