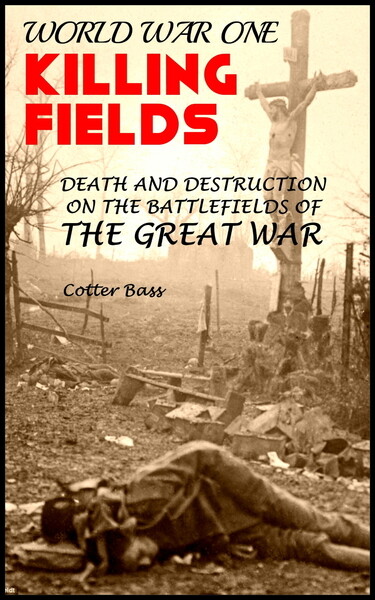 KILLING FIELDS OF WORLD WAR I

Vol. 2 of the KILLING FIELDS Trilogy

The author has exercised due diligence in determining the copyright status (if any) of the photographs and illustrations used in this book. Since most the photographs were either taken before 1923 (U.S. copyright laws), or the designated period of 70 years following the death of the photographer has expired (copyright provisions of many European nations), most photographs are in the public domain.

The author and publisher disclaim responsibility for any adverse effects that may result from the use or application of the information within this book.

All rights reserved. No part of this publication may be reproduced in any form or by any means, electronic or mechanical, including photocopy, recording, or any information storage or retrieval system, without written permission from the publisher and author.

World War One, also known as World War I, WWI, the First World War, and the Great War, was a global war originating in Europe that lasted from July 28, 1914 until November 11, 1918. Contemporaneously described as “The War to End All Wars," more than 70 million military personnel, including 60 million Europeans, were mobilized in one of the largest wars in history. More than nine million combatants and seven million civilians died as a result of the war (including the victims of a number of genocides), a casualty rate exacerbated by the belligerents’ technological and industrial sophistication and the tactical stalemate caused by grueling trench warfare. It was one of the deadliest conflicts in history and precipitated major political change, including the Revolutions of 1917–1923, in many of the nations involved. Unresolved rivalries at the end of the conflict contributed to the start of the Second World War twenty-one years later.

These alliances were reorganized and expanded as more nations entered the war: Italy, Japan, and the United States joined the Allies, while the Ottoman Empire and Bulgaria joined the Central Powers. 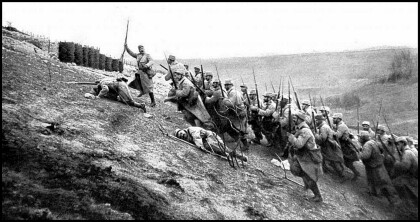 A FRENCH ASSAULT AT THE BATTLE OF ARTOIS,

The trigger for the war was the assassination of Archduke Franz Ferdinand of Austria, heir to the throne of Austria-Hungary, by Yugoslav nationalist Gavrilo Princip in Sarajevo on June 28, 1914. This set off a diplomatic crisis when Austria-Hungary delivered an ultimatum to the Kingdom of Serbia and, as a result, entangled international alliances formed over the previous decades were invoked. Within weeks the major powers were at war and the conflict soon spread around the world.

Russia was the first to order a partial mobilization of its armies on July 25. 1914, and when on July 28 Austria-Hungary declared war on Serbia, Russia declared general mobilization on July 30. Germany presented an ultimatum to Russia to demobilize and when this was refused, declared war on Russia on August 1. Being outnumbered on the Eastern Front, Russia urged its Triple Entente ally France to open a second front in the west.

Japan entered the war on the side of the Allies on August 23, 1914, seizing the opportunity of Germany's distraction with the European War to expand its sphere of influence in China and the Pacific.

More than forty years earlier in 1870, the Franco-Prussian War had ended the Second French Empire and France had ceded the provinces of Alsace-Lorraine to a unified Germany Bitterness over that defeat. The determination to retake Alsace-Loraine made the acceptance of Russia's plea for help an easy choice; France began full mobilization on August 1, 1914 and, on August 3, Germany declared war on France. The border between France and Germany was heavily fortified on both sides. According to the Schlieffen Plan, Germany then invaded neutral Belgium and Luxembourg before moving toward France from the north, leading the United Kingdom to declare war on Germany on August 4, 1914 due to Germany’s violation of Belgian neutrality.

After the German march on Paris was halted in the Battle of the Marne, what became known as the Western Front settled into a battle of attrition with a trench line that changed little until1917.On the Eastern Front, the Russian army led a successful campaign against the Austro-Hungarians, but the Germans halted their invasion of East Prussia in the battles of Tannenberg and the Masurian Lakes. In November 1914, the Ottoman Empire joined the Central Powers, opening fronts in the Caucasus, Mesopotamia, and the Sinai Peninsula. In 1915, Italy joined the Allies and Bulgaria joined the Central Powers. Romania joined the Allies in 1916. After the sinking of seven U.S. merchant ships by German submarines and the revelation that the Germans were trying to encourage Mexico to make war on the United States, on April 6, 1917 the U.S. declared war on Germany.

The Russian government collapsed in March 1917 with the February and October Revolutions. A further military defeat brought the Russians to terms with the Central Powers via the Treaty of Brest-Litovsk, which granted the Germans a significant victory. After the stunning German Spring Offensive along the Western Front in the spring of 1918, the Allies rallied and drove back the Germans in the successful Hundred Days Offensive. On November 4, 1918, the Austro-Hungarian Empire agreed to the Armistice of Villa Giusti, and Germany, which had its own trouble with revolutionaries, agreed to an armistice on November 11, 1918, ending the war in victory for the Allies.

By the end of the war or soon thereafter, the German Empire, Russian Empire, Austro-Hungarian Empire, and the Ottoman Empire ceased to exist. National borders were redrawn, with nine independent nations restored or created, and Germany's colonies were parceled out among the victors. During the Paris Peace Conference of 1919, the Big Four powers (Britain, France, the United States, and Italy) imposed their terms in a series of treaties. The League of Nations was formed with the aim of preventing any repetition of such a conflict. This effort failed. Economic depression, renewed nationalism, weakened successor states, and feelings of humiliation (particularly in Germany) eventually contributed to the start of World War II.   Factual data courtesy of Wikipedia. 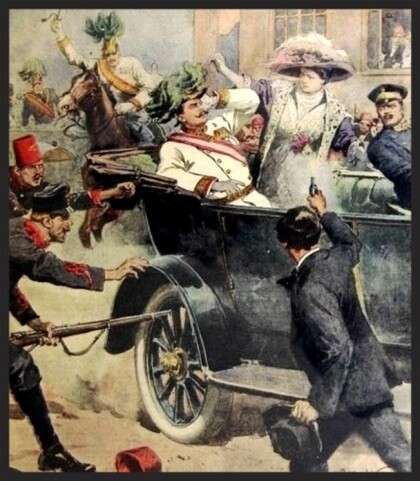 The causes of World War I remain controversial. The conflict began in the Balkans in late July 1914 and ended in November 1918, leaving 17 million dead and 20 million wounded. Scholars seek to explain why two rival sets of powers - Germany and Austria-Hungary on the one hand, and Russia, France, and Great Britain on the other - had come into conflict by 1914. They look at factors such as political, territorial, and economic conflicts, militarism, a complex web of alliances and alignments, imperialism, the growth of nationalism, and the power vacuum created by the decline of the Ottoman Empire. Other important long-term or structural factors that are often studied include unresolved territorial disputes, the perceived breakdown of the balance of power in Europe, convoluted and fragmented governance, the arms races of the previous decades, and military planning.

Scholars often ask if the conflict could have been stopped, or whether it was out of control. The immediate causes lay in decisions made by statesmen and generals during the July Crisis of 1914, triggered by the assassination of Archduke Franz Ferdinand of Austria by a Bosnian Serb who had been supported by a nationalist organization in Serbia. The crisis escalated as the conflict between Austria-Hungary and Serbia came to involve Russia, Germany, France, and ultimately Belgium and Great Britain.

This crisis followed a series of diplomatic clashes among the Great Powers (Italy, France, Germany, Britain, Austria-Hungary and Russia) over European and colonial issues in the decades before 1914 that had left tensions high. In turn, these public clashes can be traced to changes in the balance of power in Europe since 1867.

Consensus on the origins of the war remains elusive since historians disagree on key factors, and as a result place differing emphasis on a variety of factors. This is compounded by changing historical argumentsover time, particularly the delayed availability of classified historical archives. The deepest distinction among historians is between those who focus on the actions of Germany and Austria-Hungary as key and those who focus on a wider group of actors.