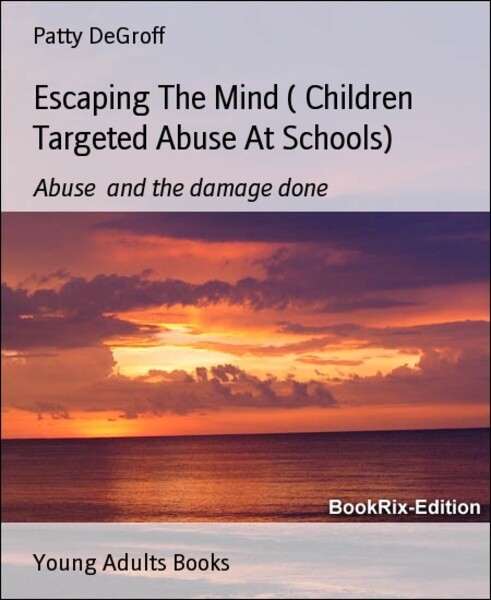 It all starts in the {First grade);
So excited she was to start school and meet new friends
Chantice Dewllet all dressed in her new shoes and dress
rushed off to school expecting a great day and learning new things yet she never imagined what the day would bring her way.

As she got up onto the school bus she looked about for a place to sit. The other kids there many older than her voiced remarks about her yet she held her smile and moved to a seat.
The girl she sat down by she turned to her with a bright hello but the girl just turned away and refused to be kind.
Chantice touched her hand and said hello once again for she felt she must not have heard her the first time, and the girl jerked away and told her I don't know you so don't talk to me.

Chantice looked away and then about the bus as to try to find a new friend she could set with that wasn't so rude and across the bus she found a smile and moved over beside him.Hi" she replied" I am Chantice who are you? The boy turns away and says why are you speaking to me I don't even know you.It seemed the kids on the bus had this thing going around for new kids and they thought it was a big joke .Only Chantice felt very bad and shut out so she turned and sat quietly the rest of the way to school.

At the school she jumped off the bus and went running up to the school teacher there so excited and holding her supplies in her hand when a young boy came up and roughly hit her books causing her supplies to scatter .Chantice yells stop it that's not very nice and being the teacher was so busy she said nothing to the boy. There were many of the kids about her just laughed and called her clumsy and a cluts and Chantice was hurt for everyone seemed to be so mean and none came to her aid. Even in the class she was forever taunted and pushed as a joke made to feel like she didnt belong there.

This form of abuse went on for several years and as they got into high school Chantice had been hurt deeply for no one day did she go to shool and find a friendly face. There were five students that made her cry most every day and would sit and giggle even on the days they made her cry.At seventeen Chantice began to think of how she could find peace how she could in some way teach the other kids a lesson and she began a journal of her life in that hell they called a school.Remembering how every day ended by rushing to her safety of her bedroom and crying and thinking of those who caused her such pain.She begins to try to find ways to escape her mind the one that is refused happiness and freedom to live from all the wrong doings so brought by the very kids that should have been her friends.

None of the kids noticed the day she came to school with that dead stare in her eyes.She saw and heard nothing about her that day for life had been denied. As she looked at those in school who ruined her life many thoughts came to her mind and she sat at her desk and took a tablet out and began to write.
She wrote a note to each of the five students that took her life away a life with friends and laughter a life they share every day.She folded each note and placed them in a pile and no one noticed that day she held a little smile.

As the bell range for the end of the day Chantice rushed up to each of those five students and gave them their note then ran off to the next. As they started to read their note they began to laugh and said yeah right and walked off.That afternoon Chantice never showed up at her house they called the school and even the law to find out her where abouts and get her back home.It wasnt untill morning they found out the true meaning of their notes.

As the school bell ran and the children began to pour into the school they heard a blood curdling scream and the children stood and stared at the entance of that hallway hung Chantice.Eyes fixed on the doorway and her mouth wrenched in what seemed to be a horrified scream .She also had a note pinned to her chest saying "Not One Friend did I find".
The students carrying their notes so proud they remebered to bring them that day to taunt Caprice with them dropped the notes there on the floor and a chill came over them as they stared back at her that day.

As the school began to get the children off to their classes and the law and ambulance came the five who had the notes picked them up quickly and tucked them away out of sight .They left and once in the class they looked at one another and there were no smiles no snickers or snide remarks just silence for their 17 years of torment and what it had caused this day.
Nothing from this day forward was ever the same for the message in each of the students notes no one ever got to read
other than those they were meant for.

Months passed and each of the students began to fall in their school work and activities.There was Carly,Jason,Becka, Tracy and Debb.Debb was the one that began this girls hell within the school she and the rest were a group that fed off the other students and caused such pain without giving it a second thought.Yet today those students will live this day untill their demise.

Carly began having nightmares and couldn't find rest as her mind reviewded every thing she had caused the girl to go through.Night after night she dreamed and would wake screaming for every dream ended the same way with Coprices body swinging there and stareing down at her.She turned to alcohol to help her yet it only caused her depression to worsen until that night she decided to escape her mind. She also hung herself and she had pinned that note she received from Chantice to her chest with another note on top that said
"No friend would I be causing anothers life to flee"
"Chantice Forgive Me".
It was news all over the town and the parents all joined together for fear the students were in grave danger for they had lost two young students in such a way. They began to ask around the school did any of the students know why they would do such a thing. Not one spoke up not even those who were part of it and the school and parents felt helpless to stop what they feared worse.

Sure enought it wasn't but a couple months later when Jason hearing about this and felt how it could have all been his fault he began to fall into a deep depression and started in with drugs failed in school and eventually stayed locked away from everyone.They all feared the worst yet felt there was ltittle they could do as he wouldn't let anyone in the room.
Played his music so loud and they could hear him screaming at times and then it stopped.Dead silence fell upon the house and the family rushed toward his door worried of what he might do. As they banged on the door without any answer back his Dad hit the door busting it open only to find their son had hung himself as well and the notes pinned to his chest just as the others saying" Not a friend would I be causing another life to flee" Chantice forgive me.As the sirens wailed the neighbors rushed out their door fearing the worst and sure enough they all wept for they now feared the town had a curse upon it placed there by Chantice and crowds began to form with their gossiping as usual on who to blame and feeling fear as they feared for their own childrens lives were at stake.

The town began to turn their atention to Becka and how she to had begun to fall in her school work and had stopped seeing her friends as well and knowing three had already passed she within her own mind began to stop feeling and became self abusive to the point her parents didn't even know the girl they were looking at was their own .She began to cut and burn herself she would take anything to stop the pain yet it never seized and she also upon a cloudy winters morning took her life.And yes they found the note she was given and the same note on top with the same writing upon it but this time they began to compare the notes of each child found. This brought much atention for the notes were all identicle and written with the same hand writing.

It seemed every two months another child was taken all in different ways but taken all the same .Tracy was next on the list and they watched her like a hawk for her family felt she was the least likly to ever take her own life so they decided one afternoon to leave her alone just for an hour to run to towm .As they got back from town they saw that there were no lights on inside the house.There first thought was she had left but then as they got to the front door they began to smell gas and quickly rushed inside to see where she was and get her out.But they were too late and she had lay her body within the oven and turned the gas on it didnt take but a couple minutes .They pulled her from the oven and there on her chest were the two notes just as before and her mom and dad screamed out in pain.

All four now passed and only one girl left Debb and she over this period of time began to lose her mind and becoming so destructive they placed her into an institution that was keeping her sedated daily .The family was near and felt they had to remain near feeling who ever was dong this would stop at nothing to get at their daughter.But they didn't have any reason to fear someone only something the mind and how it works on people once they have caused such things to happen and yes Debbs time had come and on the exact hour that Ghantice deaths. Debb would sit up in her bed and her eyes would be wide open holding that very stare Chantcies eyes held and her mouth in that wrenching scream then she would fall back into her bed .I ask you do you think she will live this horror for seventeen years as she had forced Chantice to live .Who will ever know for sure .


Author notes
What harm you cause to others in your life so shall that harm come back to you in time . If you know of certain people in your school causing others harm stand up and stop it get together and stand against such activities and show them it wont be tolerated for every child has a right to go to school and feel safe there and have friends .Don't let any child end up like the ones in this story for believe it or not it is happening this very day it's true.