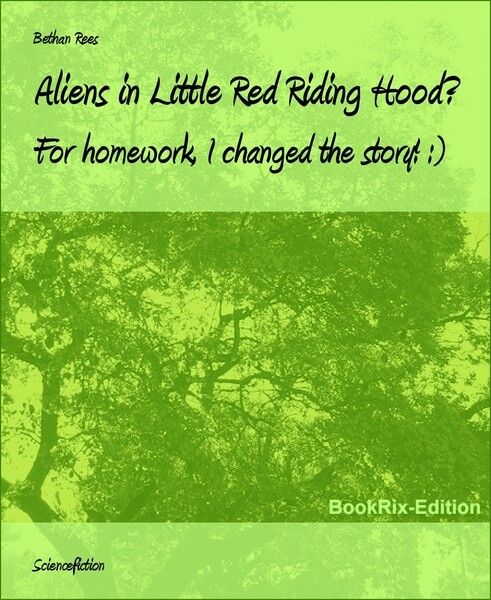 One day, in a forest, Little Red Riding Hood was eating breakfast when her mother came up.
‘Red, can you deliver this basket of chocolate cupcakes to your grandmother who lives at the other side of the forest? She is very ill.’ She asked.
Little Red Riding Hood took the basket and nodded. Her mother gave her a kiss and then, the journey begun.

When Little Red Riding Hood was approaching the usual way of getting to her grandmother, there were several signs saying ‘ROAD CLOSED’ surrounding a large crater. In the crater, was a huge meteor. It was green and glowing, with slime all over the place.

Now Little Red Riding Hood was puzzled. She could either walk through the darker side of the forest or go home and eat the cupcakes to herself. And she was a bit peckish after not finishing her Belvita breakfast biscuits. But, it would be unfair to eat the cupcakes. They were for her grandmother, anyway, and she’d be grounded if she ate them. She decided to go down the darker side.

As she walked down, it grew dark and cold. The leaves were dead on the trees and instead of blue tits chirping there were crows cawing loudly. She was just halfway through the forest when…
‘BOO!’
Little Red Riding Hood screamed. Blocking her path was an alien, with little eyes on two green antennae’s, green skin, no lips, and incredibly slimy hands.

The alien looked in a book, closed it again and spoke.
‘Hello. I am Slop. You, Earthling, what’s in the little carrier?’
‘Cakes. They’re for my sick grandmother, so don’t even think about eating them! Now, why don’t you leave me alone and let me be on my way?’

!’ Slop morphed back into himself and called the other aliens.

Little Red Riding Hood ran out. An alien spaceship was right above her head. It was large and black, with green marks on it. She was beamed up to the spaceship and it flew away.

That was the last that anyone saw of Little Red Riding Hood...