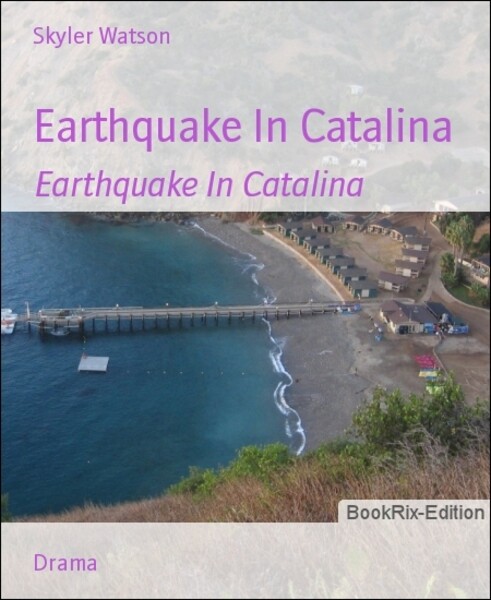 Earthquake Danger And Disaster in Catalina

When disaster strikes, you need to be prepared.....I wasn’t. But I am a survivor among twelve others.... And this is our story. Its just before dawn and earthquakes started happening, tiny ones tho. But enough to awake us.


Just shy of three hours later my class had just came back from the polar plunge. I was awakened by them starting to head back up to the cabins, luckily no one in our cabin went. Still, I was awakened by the commotion of all my friends talking about the earthquakes, and as how they were awakened. One story I over heard was that my friend Harold claiming “I thought it was Marialle asking me ‘Have you seen my husband’ and shaking the cabin!” Others had crazy thoughts like, zombies were coming, and Poseidon was coming!

Then, half of the day had tiny earthquakes. Our PC’s that is Jess and Carter said that there’s gonna be hang out day, that there is not going to be anything planed for today. So we all just hung out. We admired the small earthquakes, because our PC’s were expecting HUGE one’s. So we are going on a hike to the top of Catalina Island just incase. Our teachers were asking them if we can just leave the Island. They said no because its too much of a risk if were on the boat when that happens. So just lay low and spring to the edge of the mountain whenever you get scared or have a bad feeling. Nothing happened for the rest of the day.

In the process of us all going to bed there was a little, but quite big earthquake. It was quite a rocker. Worst one I have ever experienced yet. Several items knocked off shelves and such, but no severe damage. We all happened to be going to bed at the time. About ten minutes later now, and Maddy was still afraid to go to bed.
I took a quick check around the cabin and see no signs of damage, so I think we're okay for now. Local aftershocks are still occurring.

So I went to bed. Nothing else had happened for the rest of the night. I awoke by Maddy waking me up at quarter to six. Asking me to wake up and lets go patrol. She claimed she saw Legacy when she got up at midnight to go to the restroom outside of the cabin looking at the sky and mumbling something about souls.


I was just sitting with Maddy, Legacy and Sami in a cabin about eight o’clock and the ground started to vibrate a bit. Everyone around me perked up their ears. For about 3 seconds it seemed ok... normal... Then it got louder and started a nice roaring sound. Sami stood up and grabbed her jacket. I leaped up, grabbed my jacket and scuttled out the door. I am now proud to be the first over-reactor out of the door! It seemed a larger than normal one to me . Then the power went out.

About twenty seconds later the shaking stopped, Jess ran up to our cabins and handed small but larger tote bags and flash lights and batteries. The totes bags were small enough to put two water bottles an extra pair of t-shirt and jeans and socks. But it wasn’t heavy. They told us to put on a pair of comfy jeans and shirt and a little blanket and closed toed shoes. Meet us in fifteen minutes on the mountain side. We all met up at the same time and place and they announced “There’s going to be a SMALL tsunami. We all need to head up the mountain and keep walking for the rest of the night. Eventually we well come up on a town. But we’ll never know. Further instructions will be announced! Let’s Go!” So we all started heading up the mountain, alone with other schools. We were the third school going up.

So we were first moving fast but later everybody started getting slower but we kept our distance from the other schools. That we wouldn’t get mixed. Then soon you get scared. Your brain tells you that if this one happened, then other will happen. You cant escape! Other around you are crying. That makes you cry. Your wanting you family and animals.....but thats what makes you fight this fear, knowing that if you keep trying you might survive to see your loved ones again. Thats what I thought! Thats how I was.

But night time is the scariest of all. Okay so, the power is out all around you, and not knowing for sure if you will need flash lights for hours or days. But what is amazing that Chloe said “how dark, dark really is. You will never know how dark things are when your stuck in the dark. When every street lamp, car light or house light is out then things are so pitch black that you can't even see in front of you. And your sense of hearing takes over. And what do you hear? Not cars or engines. Because nothing is moving. All you hear is the sound of water nearby. The rushing of waves. And that is the scariest thing of all. Your mind starts to play tricks on you. You wonder if another wave is coming. If it will be larger than the last. You think you are safe. You are on high land. No! But what if another wave comes even higher. This time, you won't even be able to see it. And all you can hear is the water.

It got silent in an hour of hiking, about now the time was eleven o’clock. Then, all of a sudden we heard screams of groups of about two schools get wiped out by a tsunami wave. We were all crying, and wanting to stop but the adults wouldn’t let us. Instead, we had to run! Then soon about thirty minuets later another school got wiped out. At that time, we had to keep running and I was begging God to not let this happen! For it to be just a dream! That moment, I felt the salty wet mean mist on the back of my neck. Because I had a pony tail. Now I know that at least one of my five senses are telling me that this mess is not a dream.

About an hour more of walking, we came up on an abandoned house. Large enough to fit the remanding five schools. The house had a side wall missing on it. All of the instructors told us “To sleep the rest of the night. We might be walking all morning until the afternoon.” So we all slept. It was kind of hard to go to sleep because knowing that lots of bodies were half way down the mountain. And not knowing that their completely dead, they might be suffering. You only want to go save them, even if you don’t know them. At that moment I had a tear go down my face and I shivered. I needed to go home! I missed my family so much. I wanted to call them, but even the walkie talkie would not work from Catalina Island to California. The walkie talkie was working but nobody would answer, just for somebody to help us.

We woke up by animals running past the house and two cougars stopped and looked at us and looked at Maddy’s crush. Maddy started freaking out. I told her not to worry, the cougar wont hurt him. Tanner saw that Maddy was scared and he went to save Tanner(Maddy’s crush). But the cougar came running after Tanner Pinto, while Tanner was running after it to scare it away. But little did he know that he had a tree fall on him during the big earthquake. That means that the cougar was a little messed up in the brain. So the cougar came and ripped Tanner Pinto’s arm, and slashed off his leg and everyone started crying. Legacy and AveryAna went running after him to save him. But a boy from another school jumped in front of them both to save them. Or else they would have gotten ripped to the bone. Everyone cried but we couldn't do anything about it.

Our PC’s told us that we we had to leave! Everyone was moving fast. We heard waves coming. We thank God that a wave never swept thru us when we were fast asleep! We were walking, then all of sudden a wave hit the mount of the hill. Just about twenty feet away from us. We heard tons of screams! Then the wave struck again. Ok, so think about when you were at the beach and your facing towards shore. Then, all of a sudden a wave struck you from behind. Your knocked from behind, and you fell the sand on your cheek. It was huge, it covered us in salty water. You just cant breathe, because you didn’t see the wave coming. You just could not get a breath. Then you feel your chest inclosing!


The wave got smaller, I felt sad because knowing about how weak some people are the wave would drown them. Then the wave died down and I was breathing hard and I looked up and only our class was left!! I looked down and saw my peers laying on the ground and coughing trying to get air back in their lungs. Then, I looked up and saw four heads bobing in the water and it looked like it was, Kenton, Samantha, Chloe And Teresa. I knew that we could not save them but Mrs. Alex And Mrs. St. Peirre was already trying to get them out of that harsh cold twirling water. Mrs. St. Peirre was climbing a tree that had a LONG tree branch and now she was jumping on it to brake it off. Later, she had snapped it off. The two grasped the branch and held it on one end to throw it out to them..... TO BE CONTINUED!!