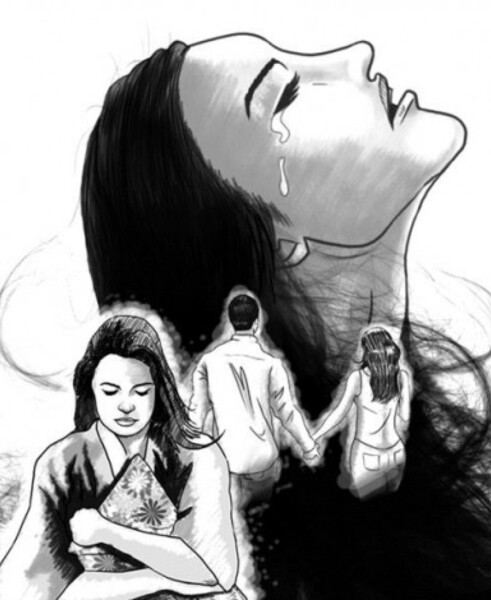 “Every time I trust someone new, they end up reminding me why I shouldn’t trust anyone at all.” I read that quote years ago, during one of my Philosophy classes in College.

“My mother used to tell me that if I tell a lie once, all my truths would be questionable,” said Mr. Miller when the class started, “and since I am a good son, I followed her advise and now I am here, teaching you the same thing so you can grow old and happy too.”

At that time, I wasn’t so sure about the happy part of it, but he was definitely old. With no hair at all, he was around 65 years old, hunchback, chubby, and extremely grumpy. However, that was not the point of the class. And now, while I brushed my hair to go to work, all I could think about was that class.

When my hair is finally done, I put my black heels on - that perfectly match my dark blue dress - and walk to the kitchen, where I will try to find peace with a good cup of a hot coffee. On the way there, my phone rings and I see Jonathan’s name on the screen. I ignored the call and started preparing myself breakfast. After a few minutes I am ready to go to work. I walk toward my car in the parking lot - a white Corolla - and, as soon as I open the door, I notice Jonathan’s sunglasses in the passenger seat. I feel the urge of throwing it out the window, but I end up just placing it on the glove compartment.

The drive to the office was calm and I arrived earlier than I expected. I give one last look in the mirror to check my make up and I surprise myself with my own reflection. My green eyes are the ones of a person that spent the night watching Dear John and crying over her ex-boyfriend. My hair is dark brown and is perfectly tied in a ponytail, with some curls in the end. I turn off the engine and lock the car before I enter the building. After a few minutes waiting for the elevator, it finally arrives and it is crowded. I find myself some space and ask for Mark, the bold man that stands by the door, to press the 12th floor button. My phone rings again and I see Jonathan’s name on the screen again. I ignore the call, but this time I turn it off so he will stop calling. “He should have thought of that before he cheated on me with that blonde,” I think to myself. The door opens and I push myself out of the elevator and into the lobby. The room is all white and the chairs are all black, which is particularly funny since this is as fashion magazine and there is nothing fashion about this lobby. I walk toward the receptionist desk, where Kate is on the phone. She nods her head several times while she writes something on a piece of paper. She is asian and her hair is always perfect, which makes me slightly envy, but I love her so much I just smile and wait for her to stop talking. When she is done, she assumes a serious expression and looks at me in the eye.

“How are you?” her voice is steady and worried, making me smile.

“I still can’t believe he cheated. How did you find out?”

“It was our anniversary. We’ve been dating for 2 years and I wanted to surprise him. He sent me a text, saying he would be late to dinner because of some client and I thought of showing up in his office. He was the only lawyer remaining in the entire building - because everyone else was home with their family - and when I arrived his secretary started crying and saying that she was sorry. I entered his office and he was kissing the blonde. He cheated on me for 7 months and I thought he loved me.” I say, hoping I sound more confident than I really am.

Kate stands up and goes around the table, hugging me as soon as she stopped walking. I hug her back, thanking her for being such a great friend and she makes me laugh by calling Jonathan some bad names. “I’ll see you in lunch, Kate” I tell her as I walk toward my office. Then, out of nowhere, Michael shows up. He is the hot guy that is not gay in the magazine. Every woman, model or not, fancys him. He used to flirt with me, but since I was dating I turned him down and told him to move on. It sounds stupid now, thinking I actually cared about Jonathan enough to let Michael go.

“I heard that jerk cheated on you. You want me to teach him a lesson?”

“Oh, that would be fine by me” I laugh, looking at him once more. He is tall, and not as strong as Jonathan, but strong too. His eyes are hazel and he is redheaded, which makes him a hundred times hotter. And to finish the deal, he is wearing a suit. Wearing a Versace suit. And smiling. While wearing a Versace suit.

“It’s okay. I was just asking you if you are going to give me a chance someday” Asking me out while smiling and wearing a Versace suit. Moving on would be easier than I thought.

“Okay. You got your chance. But I am facing some trouble with trust and...”

“Don’t worry, I will earn it. Trust has to be earned and I will earn yours. I will see you around, Letty” he says, walking away from me with that Versace suit and that smile.

When I close the door and turn to face my table I see a picture of us. Jonathan and I. We were in Disney, for holidays, that year. My hair was long and the wind made it a mess. I was wearing sunglasses and a silly 1st Time Visiting hat. My face was red as a pepper and my shirt - of Minnie and Mickey getting married - had a spot from the ice cream I was eating. But I was irrelevant when close to him. He had a tanned skin, with his gold hair that was a perfect and beautiful mess because of that same wind. This, added to the amazing smile that made my heart beat faster every time, one would not even notice his strong arms and ABS, marked by his black t-shirt. When you put that guy and the Magic Kingdom’s Castle, with a beautiful sunset, who would have cared about the girl? The picture was already perfect.

I get the frame and throw it on the trash.

The day is soon over, with nothing exciting during lunch - that involved japanese food and a waiter trying to get Kate’s number and failing miserably because he already had a girlfriend - and no extra work for me. While I am organizing my table, putting the old magazines in one place, the new projects in another, and checking the models’ outfits one last time, the phone rings.

“Obviously” she sounded nervous, which is odd since Kate is never nervous.

“Jonathan called a few times. I answered him once and told him to move on just like you are, and when he asked what I meant I told him you were going out with Michael.”

“Okay. It’s fine, Kate. I don’t think he is going to try anything or keep calling me anymore. It was actually a great idea.”

“Until he showed up here and started a fight with Michael."

I run out of my office and toward the stairs. It would be stupid to wait for the elevator now, so I rush downstairs, which causes me to twist my foot twice. Maybe waiting for the elevator wasn’t a bad idea after all. I arrive at the lobby minutes later, where two security guards are trying to pull them apart and stop the fight. Michael has a bleeding nose, and the suit is destroyed, but I am glad he is fine. As for Jonathan, his clothes are fine, but he has a bleeding lip and a dark eye.

“What the hell are you two doing?” I snap.

“Are you going out with him?”

“How is that of your business, Jonathan?”

“You are my girlfriend” he shouts. Michael tries to hit him again, but the guard stops him.

“You should have thought of that when you cheated on her, asshole” Mike shouts, trying to break free again.

“Stop, you two! Jonathan, get out of here. Go after that blonde and stay with her. And Mike, it’s okay. He doesn’t deserve any of our attention” I walk toward him, and whisper: “C'mon, let me take care of you.”

As I pull him toward the bathroom, where I know there is a First Aid Kit, I hear Jonathan being pushed out of the building.

“He said you are whore because you were still dating him and going out with me - by the way, I have no clue where he got that from since I haven’t asked you out… Yet - and that you were using me to get to him. I lost my mind when he called you a whore, so I told him to leave before I called security and he gave the first punch” he says all at once. I finished cleaning his nose when he whispered “I am sorry. This is no way of getting a woman’s trust.”

“Hey, you are doing fine. I just need some more time to think of something serious. Just don’t get in any other fights. Your face is too pretty and your suits are too expansive to be wasted in a fight with a guy that does not even deserve to be named.”

He laughed. A real, loud laugh. One I’ve never heard from him before. A laugh that made me smile with actual joy because of how sincere it was.

“My face is too pretty and my suits are too expansive? Really? You are unbelievable, Letty. But don’t worry, I will wait for you.”

“Anytime.” he starts leaving, but he changed his mind and turned to face me again. “I will take care of you, Letty. We’ve known each other for years now, and you were there for me from when I lost my mom, 5 years ago, until when I got promoted, 7 months ago. I know you loved him - and I am sorry he couldn’t see how amazing you really are - but I will never let you down the way he did. I promise you.”

I have tears in my eyes by the time he is done. He leans down, and I am sure he is going to kiss me, but instead he kissed my forehead, and whispered: “I will see you at 8pm, for dinner” and walks away, leaving me to my thoughts until I realize:

“Calm down freak, I am going to help you. Just remember, he has to earn your trust” says Kate, while she leaves one of the cabins in the bathroom. She was there all the time? “And OMG! What was that, girl?” she screams, answering the question I asked myself.