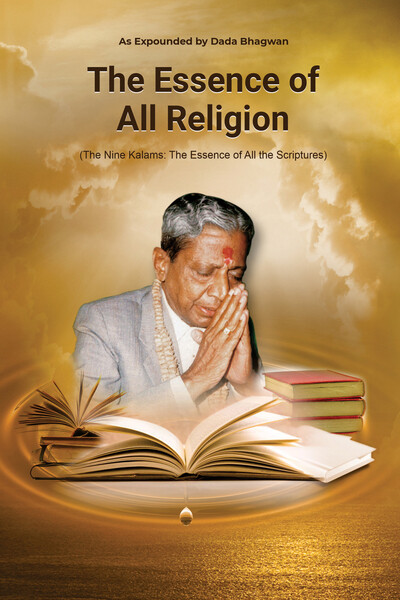 The Essence of All Religion

The Three Mantras that Destroy All Obstacles in Life

I bow to the living One who has annihilated all internal enemies of anger, pride, deceit and greed

Of all that is auspicious

This is the highest

Awareness of the Eternal is Bliss

Note About This Translation

Gnani Purush Ambalal M. Patel, popularly known as Dadashri or Dada or Dadaji, used to say that it is not possible to exactly translate his satsang on the Science of Self-Realization and the art of worldly interaction, into English. Some of the depth and intent of meaning to be conveyed to the seeker, would be lost. He stressed the importance of learning Gujarati to precisely understand all his teachings. Dadashri did however grant his blessings to convey his original words to the world through translations in English and other languages. It was his deepest desire and fervor that the suffering human beings of the world attain the living freedom of the wonderful Akram Vignan that expressed within him. He further stated that a day would come when the world would be in awe of the phenomenal powers of this science. This is an humble attempt to present to the world the essence of the teachings of Dadashri, the Gnani Purush. A lot of care has been taken to preserve the tone and message of his words. This is not a literal translation of his words. Many individuals have worked diligently for this product and we remain deeply thankful to them all. This is an elementary introduction to the vast new treasure of his teachings. Please note that any errors committed in the translation are entirely those of the translators and for those we request your pardon.

Introduction to The 'Gnani Purush'

On a June evening in 1958 at around six o’clock, Ambalal Muljibhai Patel, a family man, a contractor by profession, was sitting on a bench on the busy platform number 3 of Surat’s train station. Surat is a city in south Gujarat, a western state in India. What happened within the next forty-eight minutes was phenomenal. Spontaneous Self-realization occurred within Ambalal M. Patel. During this event his ego completely melted and from that moment onwards he became completely detached from all Ambalal’s thoughts, speech and acts. He became the Lord’s living instrument for the salvation of mankind, through the path of knowledge. He called this Lord, Dada Bhagwan. To everyone he met, he would say, “This Lord, Dada Bhagwan is fully manifest within me. He also resides within all living beings. The difference is that within me He is completely expressed and in you, he is yet to manifest.” Who are we? What is God? Who runs this world? What is karma? What is liberation? Etc. All the world’s spiritual questions were answered during this event. Thus nature offered absolute vision to the world through the medium of Shree Ambalal Muljibhai Patel. Ambalal was born in Tarsali, a suburb of the city of Baroda and raised in Bhadran, Gujarat. His wife’s name was Hiraba. Although he was a contractor by profession, his life at home and his interaction with everyone around him was exemplary even prior to his Self-realization. After becoming Self-realized and attaining the state of a Gnani, (The Awakened One), his body became a ‘public charitable trust.’ Throughout his whole life he lived by the principle that there should not be any commerce in religion, and in all commerce there must be religion. He also never took money from anyone for his own use. He used the profits from his business to take his devotees for pilgrimages to various parts of India. His words became the foundation for the new, direct and step-less path to Self-realization called Akram Vignan. Through his divine original scientific experiment (The Gnan Vidhi), he imparted this knowledge to others within two hours. Thousands have received his grace through this process and thousands continue to do so even now. ‘Akram’ means without steps; an elevator path or a short cut, whereas ‘Kram’ means an orderly step-by-step spiritual path. Akram is now recognized as a direct shortcut to the bliss of the Self.

Who is Dada Bhagwan ?

Current link for attaining the knowledge of Self-Realization (Atmagnan)

“I am personally going to impart siddhis (special spiritual powers) to a few people. After I leave, will there not be a need for them? People of future generations will need this path, won’t they?”

Param Pujya Dadashri used to go from town to town and country-to-country to give satsang and impart the knowledge of the Self as well as knowledge of harmonious worldly interaction to all who came to see him. In his final days in late 1987, he graced Dr. Niruben Amin with the siddhis to continue his Work. After Param Pujya Dadashri left his mortal body on January 2, 1988, Dr. Niruben continued his Work, traveling within India to cities and villages; and going abroad visiting all continents of the world. She was Dadashri’s representative of Akram Vignan, until March 19, 2006, when she left her mortal body entrusting all further care of the Work to Shri Deepakbhai Desai. She was instrumental in expanding the key role of Akram Vignan as the simple and direct path to Self-realization for modern times. Hundreds of thousands of spiritual seekers had taken advantage of this opportunity and are established in the experience of pure Soul while carrying out their worldly duties. They experience freedom, here and now while living their daily life. Shri Deepakbhai Desai had been given the siddhi to conduct satsang of Akram Vignan by Gnani Purush Dadashri in presence of Pujya Niruben Amin. Between 1988 and 2006, he has given satsang nationally and internationally as directed by Dadashri under the guidance of Dr. Niruben Amin. Now these satsangs and Gnan Vidhis of Akram Vignan continue in full force through the medium of Atmagnani Shri Deepakbhai Desai. Powerful words in scriptures help the seeker in increasing their desire for liberation and thus they represent the path. The knowledge of the Self is the final goal of all seekers. Without the knowledge of the Self there is no liberation. This knowledge does not exist in books. It exists in the heart of a Gnani. Hence, the knowledge of the