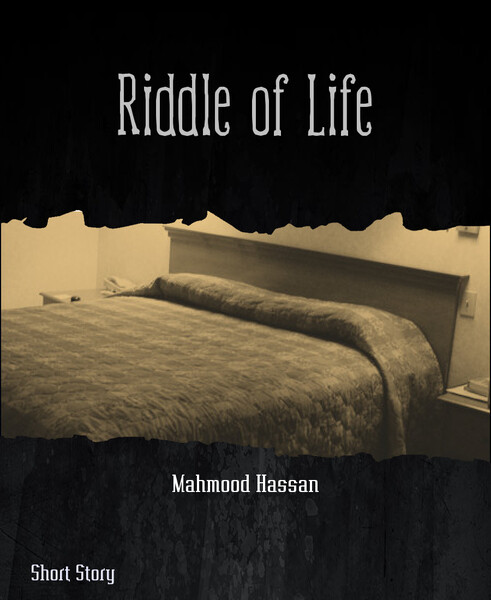 "Dad! look at that wave..! Wow! It is even bigger." It was the 4th birthday of his son so they decided to celebrate it at the beach. It was a lovely day for such an event and the place wasn't too crowded. A light blue painted sky with some clouds floating on it, a cold, whispering but comfortable wind, fresh scented air making you feel alive each time you breath, warm sand healing you inside. What else could be better than that? Excited and vivacious face of his son, wearing a smile worth more than anything, was something he never wanted to end. Watching him collecting seashells with other children, chasing the birds, feeling warm sand on his cute lil feet ,were the noteworthy moments of his life.
He was living a dream. A quite prepossessing wife, a 4 years old son, a perfect job. He got all one can wish for. They never thought of expanding, because he wanted to give all his love, attention and luxuries to his only son, Reginald. A cute child,with rounded protruding cheeks, hazel green eyes, blonde hair. A precious gift from heavens.

All those memories were so vivid, entering his mind unbiddden. It was just another day for 67 years old, Mr brown, to sit besides the window, staring outside with blank eyes on wrinkled expressionless face, until a tear drop rolled down his cheeks.
There comes a point in a person's life when he realize that he can choose his destination but he can't make his fate bend towards it. Sometimes you have to go with a flow. You just can't resist or it will break you within.

"Wake up dad! We have to go. They will announce the winner today." said Reginald excitedly "And I already know who the winner is!" Added Mr Brown, with a smile. Another pleasent day it was, sunlight passing through Roman blinds brightened the whole room. The whole house was filled with a delicious smell of Apple cannoman oatmeal.
They got ready right after the breakfast. As they were passing through the hall way to the front door, the phone rang. Mr brown picked it up, "Hello Son.. How are you?" it was quite a long time since he heard his voice, his dad was on the other side. "Hi dad! I'm good.. you?"
"Hurry up! we are late already..!" Mrs brown said agitatedly as she was waiting outside with Reginald. "Dad I need to go I will call you back later!" said Mr brown, "Son, there is something I need to.." Brown hung up before he could say any further.
There wasn't a single seat empty. It was quite a big hall or better be called an arena. Everyone was so enthusiastic about the final winner, especially Mr and Mrs Brown. They couldn't wait to see Reginald on a stage with a winning prize, they were confident about their son. And then it happened, they announced the winner, with a big round of applause, for the best architectural design, it was Reginald. Reginald hugged his dad as soon as he got off the stage. Another best day of Mr Brown's life.

An eco of a similar voice brought him back from the valley of his memories. In an instant, lively enviorement of his mind got replaced by air filled with dreadful smell of bleach. A nurse aproched, with some overmedicating pills. He glanced at her, as if he was blaming her for his fate or questioning her his miserable existence , without a blink.
It was 12:30 pm, a hot day, sunlight was steaming the room. He got told that someone is here to meet him.
His heart skipped a beat.

5ft 8' tall, with pale brown eyes and auburn hair, an immaculately dressed gentleman. But an unfamiliar face for Mr Brown. Walked into the room.
"Hello, Mr Brown" He said, wearing a fake smile. "Do I know you? asked Mr Brown. "No, you don't, my name is Kenneth. I have got something for you." His hands reached inner pockets of odd vest. It was an invitation card. "Mr Reginald tried to call you but couldn't reach you so he told me to give it to you." Handing it over to Mr Brown, he said.

The honor of your presence
is requested at the marriage of

Saturday, the seventh of April
Nighteen eighty one
at half past four in the afternoon

And there was a ticket to Bilbao.

"But its a dream job dad, first step to my success!" exclaimed Reginald. "it is at the back of beyond! You can get an ideal job here too, can be with us, with me, with your mom." "Dad I promise I'll call you each and everyday and I'll take you and mom with me as soon as I get a chance." said Reginald, trying to convince. "Okay son.. I'm happy for you."
Days, weeks and then months, sometimes promises are hard to keep or people just change their piorities. It's been month since he heard Reginald's voice.
The grizzled Mr brown, looked for his glasses. Dialed a number, someone picked up "Hello, Jimena from GGMPU Architects" "I need to talk to Reginald." said Mr Brown "Mr Reginald is not in his office right now, you want to leave a message?" "I'm his dad, When will he be back in the office?" inquired Mr brown. "He keeps his own schedule, but I’ll be sure to have him return your call as soon as possible" Mr brown hung up without saying another word. He looked down with a blank mind.
Then glanced at his wife, who was taking her last breaths.

"Mr Brown?? Are you alright?" said Kenneth.
"I want you to leave right now!!" said Mr Brown bursting with anger. The reaction was quite outrageous but still he managed to gather himself.
Kenneth left.
He felt blood rush through his spine and then there was darkness all around.

Happiest day for Reginald. The day when Reginald got blessed with a healthy son.

A precious gift from heavens.