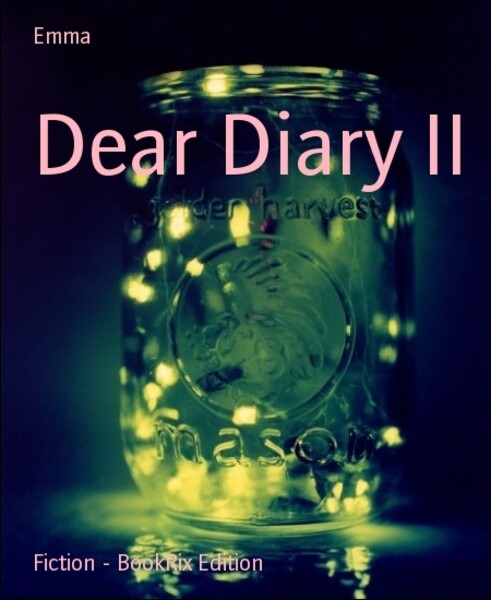 Dear Diary,
BIG NEWS!!!!!!!
OK, so last night we were all in the living room, bored out of our minds, when Alice had a vision. We all sat there waiting when she gasped in surprise. Edward gasped too, reading her thoughts. "It's not possible... unless..." Her voice trailed off. Jasper looked at her curiously. "Alice, what did you see?" But when Alice spoke, she looked at me. "I saw Bella... Holding a...
"A baby," Edward breathed.
"But, t-thats i-impossible!" I gasped
Emmett looked up. "Oh no. Not again!"
I glared at him. Alice sighed. "Well, its not Bella's, and its not any of ours... Who's could it be?" But I had already guessed why Edward looked so tense.
"Renesmee..."
Ooooh! I am so excited for my baby! I wonder when?...
~Bella

Dear Diary,
As it turned out, this vision was not so far away. Two days after the vision, Renesmee got sick, (she thought!) But she had the strangest feeling. So she took a test and called me excited and crying. She came over today.
Carlisle ran some tests and the mixture is almost impossible. Its half werewolf, half human-vampire. Now, here's the mind boggling part, even Carlisle can't figure out: Vampire bites are poison to werewolfs. So how can this even be possible? Its very confusing. In about three weeks we'll know if its a boy or a girl!
~Bella

Dear diary,
Sorry i haven't written but I've had so much to do, with preparations for the baby. Oh! I almost forgot! Its a girl! Renesmee was so excited when Carlisle told her. Edward and I were out hunting when she called. We raced back and She met us at the door. Renesmee looked elated but Jake looked like he was about to puke. And nobody wanted to see that, considering what he eats.
" Bells, can I talk to you?" He whispered.
"Sure." I snuck upstairs to Edwards old bedroom and brought a bowl, Just in case he did puke.
"Jake, whats wrong? You look awful."
He looked up and you could see the tortured agony in his eyes.
"Is the baby gonna come out like Renesmee?"
My breath caught. I knew what he was talking about.
Renesmee had clawed her way through me to get out. Of course the process almost killed me but Edward saved me by turning me into a vampire. But would Jake endure the pain and let Renesmee be bitten?
"I-I don't k-know," I stuttered.
I looked up an Jake was shaking.
"Jake, calm down. Don't overreact-"
Don't overreact?!" He exploded "You weren't there to see yourself Bella! You weren't there!"
Stay calm, Bella, I told myself. Reason with him. I waited for his breathing to slow then started again. " Can I finish?" I asked. He nodded without looking up. " What I was going to say was 'Don't overreact, yet.' We can have Carlisle run some tests and see if it even has enough vampire to do that."
Jake was crying.
"I'm-I'm scared Bella. I really am." He sobbed
"Don't worry Jake, It'll all work out.
~Bella

Dear Diary,
Esme had mentioned to Renesmee that we should discuss Baby names earlier today. But Renesmee already had a name picked.
"Isabella."
I was so happy when she said that. My heart could have stopped altogether if it was still beating. When I managed to talk again all I could say was "What's the middle name?"
"Rachel. Isabella Rachel. It's pretty, don't you think?" Her eyes sparkled.
"It's beautiful"
~Bella

Dear Diary,
Just like Alice's vision.
I held Isabella in my arms and she was as beautiful as her mother. Just like Alice's vision.
She takes after Renesmee a lot. She has Jake's black hair, but it's curly, like Renesmee's. It's like a perfect mix of the two. But one thing I was surprised. She had Renesmee's (My!) eyes! Isabella is the perfect little miracle! Renesmee and Jake decided they wanted to live very close to me and Edward's cottage, So all of us built one for them.
Isabella is sleeping and Renesmee is laying on the couch, holding her. I've been calling her 'Bell'. Renesmee doesn't mind. It's reminds me of Jake's old nickname, 'Nessie'
They're both so beautiful.
Just like Alice's vision
~Bella