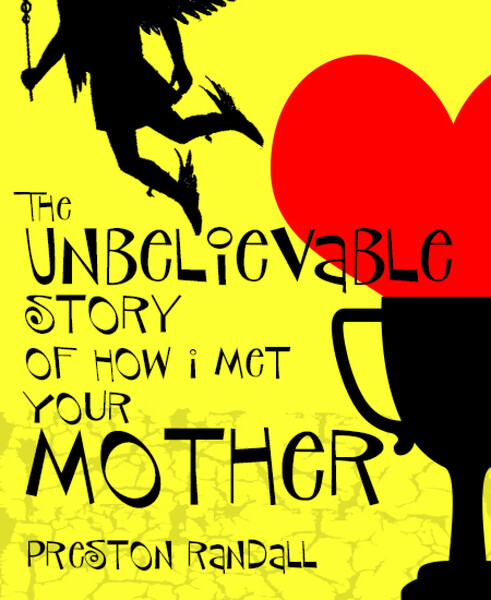 The Unbelievable Story of How I Met Your Mother

Daniel Zurenski was a little overweight, but not too much—just enough so there wasn’t a lot of loose fabric in any of the shirts he wore. Sure, he could go out and buy new clothes but after a few weeks of starving himself he’d lose ten to fifteen pounds and everything would fit fine again. And then one night he’d wolf down a whole loaf of bread and that would start a new round of binge eating until he regained it all. Stop it! he’d say to himself. Don’t. Throw it out. He’d shove another handful of potato chips into his mouth and eat until the bag was empty. You’re such a pig.

But today he was dressed for the race with brand new black Nike running shorts and blue and white Nike runners. He also wore the light blue racing singlet covered in advertising that came with the marathon race kit and he’d attached his number to the front with the safety pins provided. He’d never run a marathon before and his longest run had been a 5 km race one month earlier. He’d barely finished, wheezing and on rubbery legs, and for a week afterwards walked around stiff-legged and sore with tiny shuffling steps like a man twice his forty years.

The only reason he started jogging was because of his mother Sophie. Six months ago she was watching her favourite program on TV—The Dr. Oz Show. The good doctor snapped on a fresh pair of purple rubber gloves before unveiling a horrible greyish blob of desiccated flesh. As the camera zoomed in for a close up, Dr. Oz grabbed the mass and opened it up while the audience gagged and groaned.

“This is the heart of a forty-year-old man who was completely sedentary,” said Dr. Oz. He pulled open a section which had been pre-cut to display the interior. “See how this opening is almost completely clogged up?” Dr. Oz poked a purple forefinger into the blob which looked like 100-year-old Swiss cheese.

He slapped the mass onto the table with gusto and swivelled back towards the camera. “So what can you do?” The shot switched to another camera that panned across the faces of the audience who mostly looked like they were ready to toss their cookies. Those who were overweight, however, leaned forward expectantly to hear how they might avoid ending up as a specimen on some future broadcast.

Dr. Oz strolled over to a massive monitor which featured three words: DIET, EXERCISE, LIPOSUCTION. “Which one of these three things is the most important factor in reducing heart disease?” Immediately the audience started shouting out their favourite answers in about equal proportion.

“Did anyone say exercise?—You’re right!” Dr. Oz described the benefits of aerobic exercise while pointing to another giant monitor which declared THE THREE GREATEST EXERCISES OF ALL TIME. Jogging was at the top of the list. The audience erupted into wild applause prior to the next break of fifteen consecutive commercials.

Watching intently from the couch, Sophie wrote a note to herself on the small memo pad she always carried wherever she went. She wrote the date and time followed by: “Danny, heart, jogging” and underlined it twice. Later that evening she would tear out the note and transfer it to one of thirty-five identical grey metallic card index file boxes in her bedroom. The file box was labeled “Danny” and had separators inside for year and month. She picked up the phone and pressed the number 1 on her speed-dial. After three rings she waited for the tone and left a lengthy message. She couldn’t wait for Daniel to drive back to the house at 4:30 p.m.; he lived in the same basement bedroom that had been his for the past forty years (excluding the first six months when he was nursing). This was too important.

After turning off the television, Sophie embarked on a one-mile walk around the neighbourhood. She tried to go out every day and everyone marvelled at how fit she appeared for her age. But near the end of her stroll as she slowly shuffled back up the steep hill to her small house she started to feel dizzy. She stopped to catch her breath and leaned on her neighbour’s fence a few feet from the sidewalk. Then she walked right past her front door and continued for another three blocks.

Something wasn’t right. The dizziness had subsided but the houses looked unfamiliar and Sophie started to panic. She stopped again, shook her head and turned around. Damn! If only she could remember. She pulled out her phone, stared at it in confusion and stuffed it back into a pocket. Nothing made sense anymore. Why couldn't she remember how to use the danged thing?

Sophie felt a wave of nausea as the dizziness returned. She fell to the ground and lost consciousness. A passerby stopped and called 911, but when the ambulance arrived it was already too late. Daniel received a phone call from the hospital telling him his mother had died of a massive stroke.

As he sat in the kitchen sipping coffee Daniel’s thoughts returned to Sophie’s final voicemail from six month’s ago. “Hi Danny, it’s me. Please call as soon as you can. You know we’ve talked about this before but I’m worried. Promise me you’ll start doing some regular exercise like jogging. I don’t want you to end up on Dr. Oz’s specimen table. I’m going out for my walk now but I’ll be back in two hours. Love you! Bye.”

He’d had the conversation with his mother many times before about exercising and even though he didn’t know what she meant about ‘Dr. Oz’s specimen table’, he did know one thing. She had asked him to promise that he’d start exercising. It was her last wish, so to speak.

So when an office memo came out looking for recruits to run in the team division of a local 5 km race Daniel signed up. He worked as a lab assistant in a medical research facility and even though he’d been there for nearly fifteen years he still didn’t really have any close friendships. The team captain wrote asking what department he was in to make sure he actually worked there.

Daniel went out jogging by himself every day after work until the race even though it nearly killed him and he hated every single mile. But he hardly lost any weight and still didn’t feel like he’d accomplished anything. It didn’t help that he sat in front of the TV every night eating a bag of cookies or Cheezies or whatever but he couldn’t seem to stop himself. When he wasn’t eating his thoughts turned dark. You’re such a loser. Still not married and never will be. You’ll never be loved by anyone and who can blame them? He turned up the volume on the TV and opened a fresh bag of Doritos.

To his own amazement, even though Daniel had to fight a daily mental and physical battle to get out of the house for his jog, he actually completed the 5 km race. But he knew he had barely done it and hadn't truly honoured the promise he’d made to his mother. And that made him feel even more like a loser than  before he signed his name to the team roster three months earlier.

Then, a few days after the race, he saw a commercial for the upcoming city marathon and something clicked in his mind. He remembered that he overheard some of his co-workers saying the marathon was the ultimate running competition and they should start increasing their training right away. That's when it hit him: if he could run and finish the marathon, it would be a gesture worthy of all the love and support he received from Sophie over his lifetime. He’d dedicate the race to her and fulfill her last wish at the same time. And maybe, just maybe he’d shed some weight and start to feel a bit better. Maybe he’d even make some new friends. Female friends you mean. Good luck loser.

Today was race day. The sun barely peeked over the horizon and thousands of people were already pouring into the downtown core of Victoria where the marathon start and finish line were located. Daniel sat in the kitchen sipping a triple “shot-in-the-dark”—his morning ritual of three shots of freshly-ground Italian espresso poured into a gigantic mug of black coffee. He added a large splash of cream and three tablespoons of honey. He checked his watch—7 a.m. His stomach rumbled ominously and he felt a slight twist of pain in his lower abdomen. Must be nerves, he thought. That, and the fact he’d hardly slept a wink the night before in anticipation of the big day.

Daniel opened the refrigerator and scanned the contents of the lower shelf which were arranged alphabetically. Where

Widmung:
To Laura Rose Randall for showing me the true meaning of unconditional love.