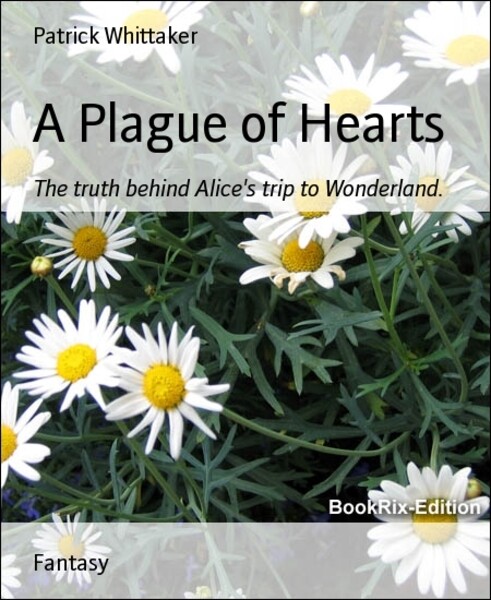 
1. At the Palace of Hearts

‘Twinkle, twinkle Cadillac!
‘What has made your piston crack?
‘Along the motorway you cruise,
‘Like an ugly, metal bruise.
‘Twinkle, twinkle Cadillac,
‘What has made your piston crack?’
The March Hare was profoundly moved. To him the motor car symbolized all that was transient in the world; to hear it compared to blemish skin was to be witness to a profound revelation, a marriage between the Material and the Spiritual.
‘My heart is like a sports car!’ he declared, slamming his paw on the table. A startled tea cup took to the air only to be caught up in the fact that it was profoundly unaerodynamic. It crashed into an empty jug and bled cold tea.
‘What,’ asked Alice, ‘is a sports car? Or a Cadillac or a motorway for that matter?’
The Hatter smiled a fatherly smile at her. ‘That was nicely put, my dear. Though you have the face of a warthog and the eyes of a myopic piglet, you undoubtedly have the heart of a poet.’
‘That’s no answer.’
‘So young, so young! And oh so impetuous. In time, little girl, you will learn that answers are unimportant. It is enough merely to understand the question and to know that a question has been asked. Can you not see this?’
‘No.’
‘My brain,’ said the March Hare, still in the heady embrace of inspiration, ‘is a motorbike gleaming crimson in a sunset that unites the sea with the sky.’
‘Shut up,’ said the Mad Hatter. ‘Or I’ll tweak your nipples.’
The March Hare shut up.
‘By the way,’ said Alice. ‘Is this a birthday party?’
‘Not exactly,’ said the Mad Hatter.’
‘An anniversary party?’
‘As of today, yes. It’s been a year since this party began.’
‘You mean you’ve been partying for a whole year? How fab!’
‘Of course, it’s starting to wind down now, but at its peak I had over three hundred people and animals here. Even the Queen popped by.’
‘It’s a shame they didn’t all stay.’
‘Shame? Not really. The essence of a good party is that folks be allowed to come and go as they please. No man should be a prisoner to plum pudding, a slave to strawberry fool, a martyr to meringue.
‘Mind you, there’ve been times when I’ve noticed a distinct lack of atmosphere. But that only seems to happen when I’m on my own, so I guess I’ve got no-one to blame but myself. If it wasn’t for my old buddy the March Hare popping by now and then, I think I might have finished the party months ago. There’s nothing like a year long party for finding out who your true friends are.’
‘What about the Dormouse?’ asked Alice. ‘He looks to have been here for a long time.’
‘Oh, he doesn’t count,’ explained the Mad Hatter. ‘He just turned up one day, asked if I was interested in double glazing and then fell asleep.’
‘Have you tried waking him?’
‘Not terribly hard. He makes a good pillow.’
‘You stay here during the night?’
‘My dear, a good host never abandons his guests. That’s one of the first Laws of Etiquette.’
‘Etiquette?’ said Alice, looking around. ‘Is that where I am? Someone told me it was Wonderland.’
The March Hare checked his pocket watch. ‘In another two hours and forty minutes, the year will be up and it will be time to end the party.’
The Hatter was greatly saddened by this observation. It sat on his heart like a dazed bullfrog. ‘Just when things were beginning to liven up!’
Being unable to provide consolation, the March Hare offered food instead. ‘Have some trifle, old chap. That’s what you need - sherry and banana trifle.’
‘There isn’t any,’ said Alice.
‘That’s hardly the point,’ said the Mad Hatter. Three crooked lines formed chevrons on his brow; they pointed down to where his spirits lay. ‘You should always look on the bright side. Be an optimist.’
‘Like me,’ said the March Hare. ‘If I see a glass half-filled with water, I don’t say, "There’s a half-empty glass". I say, "If things get really bad, at least I can break the glass and slash my wrists". It makes all the difference.’
Before Alice could answer this point, the Mad Hatter pointed to a silver bowl filled with small, brightly-wrapped parcels. ‘Have a go at the lucky dip. Every one a winner.’
‘Thank you,’ said Alice, picking out a likely-looking package. Her eyes shone with excitement. She was in her element here - all girlish and awash with innocence and greed. The paper disintegrated beneath the onslaught of her nimble fingers. Finally, a blue capsule about the size of an aniseed ball sat in the palm of her hand.
‘What is it?’ she asked. ‘It’s not poisonous or hallucinogenic, is it?’
‘I wouldn’t know,’ said the Mad Hatter. ‘You’re not supposed to eat it.’
‘Then what - ’
‘That, young lady, is the latest breakthrough in medical science.’
‘It’s gone.’
‘Not for very long, my dear. Can’t you feel something crawling up your legs?’
‘No.’
‘Well, you jolly well - .’ The Mad Hatter broke off in mid-phrase. A very peculiar look came over his face. ‘Ah,’ he said. ‘It’s going the wrong way. Oooh.’ He sighed serenely. ‘Wonderful. The world’s first self-guided suppository.’
Alice was alarmed. ‘You’re a very strange person. You’ll be hearing from my mater about this!’
And with that, she got up and left.
‘What an ugly girl,’ said the March Hare. ‘What an ugly, ugly girl.’


3. Conversation with a Caterpillar

following your recent loss of employment and inpursuance of the Emergency Labour and War EffortAct, you have been assigned the following post whichyou are required to take up on the first working dayfollowing receipt of this formal notification. Failure todo so will result in your arrest and imprisonment.
POST : Royal Valet.EMPLOYER : His Majesty, the King.ADDRESS : The Royal Palace of Hearts.
Signed,
T.J. Walker (Chief Clerk)

How are you keeping? I am sorry that we have been parted in such a cruel and sudden manner, but life is like that. It’s an endless series of meetings and departures. I am sure that you will soon make lots of friends in your new home.
I’ve made the doctor promise to change your pickle at least twice a week. He assures me that he will use nothing but the highest possible grade of embalming fluid. Some organs have to make do with vinegar, so you can see just how lucky you are.
Your friend, Mr. R. Testicle, sends you his best wishes and has asked me to tell you that he misses you very much.
If everything works out as I think it will, then you could well be reunited in a matter of days.
I have applied to what’s left of the State Welfare Department for a Social Worker to visit you every now and then - just to make sure that you’re adapting ok to your new environment. It may even be possible to get you adopted. I hear that many a brave soldier has returned from the trenches missing vital organs, and it warms my heart immeasurably to think that you - my one and only left testicle - might one day bring hope and happiness to a fellow human being.
If you need anything, please let me know.
Warm Regards,

forgive me for the way that I’m leaving you now. I wanted to say goodbye but could think of no better way than this. When they sent me to fight their stupid war for them, there were many things I would have said to you if I could have found the words. Now I know what I should have said. It is simply that I love you and will always love you, and that’s the one thing the bastards can never take from either one of us.
So who shall we blame for what’s happened? Let’s blame no-one. Something tells me that if we can forgive them for what they’ve done to us, then we’ve at least done something to make it all a little better.
I’m leaving now for what I am sure is a better world. It’s not because I want to, but because I know I must. Already I can feel the new life I’ve been given slipping away from me. What no-one seems to have realised is that orgone energy is but one aspect of the life force. On its own, it cannot sustain me. Peregrine Smith supposedly cured me, but within a day of his treatment, my face fell apart, exposing once again my wounds. The same thing is certain to happen this time.
How can I come back to you like this? You’re a sweet, compassionate person and you would not turn me away because of my deformities. But inside you would be filled with horror, revulsion and - worst of all - pity.
For the sake of both of us, we can never be lovers again. At least not in this world. And without you, nothing makes sense anyway.
Please don’t grieve for me. I go willingly, and thanks to you, I have found more joy in my few short years than most people could know in a thousand lifetimes.
Once again - I love you.
Shadrack.