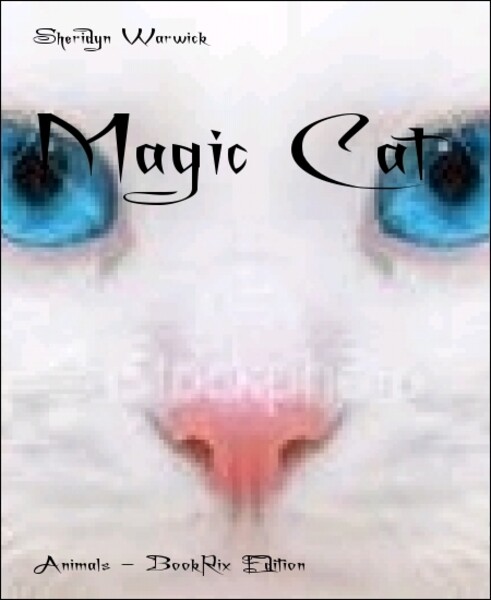 "Castor!"
The white cat groaned and curled into a tighter ball, wishing for more sleep. The fur on his neck bristled and he waited for the obvious.
A small bundle of gray fur attacked Castor, destroying all hopes of sleep. Castor opened his bright blue eyes, glaring at the queen-kit on top of him.
"Vicki, get off." He yawned.
The gray kitten giggled and rolled off her older brother, "It's nearly noon, Casty. You have to get up sometime."
Castor stood and streched his limbs, "I'm up. Happy?"
The kitten shook her head rapidly, "No! You have to play with me!"
The little kitten grabbed her brother's hand and dragged him out of their den and into the garish sunlight.
Castor loved his sister, she was all he had left. They never knew their father, and their mother, Tai, was murdered by a dog. Vickidalia and Castor had lived on their own for most of Vicki's life. Most of the time, they were on the run, going from place to place.
Because Castor had a secret.
A dark secret.
He was a mystic.
Cats are far more complex than humans realize. They have entire civilizations, tribes, governments, and rules. One rule was that all cats were equal.
Not many cats follow that rule.
Some cats are speciel. Different. They have powers. Castor is one of those cats, his entire life he's had magical abilities. Visions, telekinesis, using spells.
But he wasn't alone. Vicki was pretty speciel herself. She and Castor could comunicate with their minds. She could also teleport.
Cats are a lot like humans. They fear what they don't understand. And they destroy what they fear. So all mystic cats were on the run. Living in the shadows. What little of a life they lived.
But Castor didn't want that for his baby sister. She was to young, to innocent. She had done nothing wrong.
Castor shook the dark thoughts out of his head and followed his sister into the clearing where she always played. She spotted a butterfly and pounced at it, giggiling when it got away. Castor laughed, he wished he could be like that. So carefree and young. But he was the oldest, and he had to protect his baby sister.
A twig snapping caught his attention. He jumped off the ground and hissed, running to Vicki and shielding her body with his. She began to panic.
"Casty!" She cried, "What's going on?!"
He nuzzeled her head, "Shh. Vicki, relax. I'll protect you."
The bushes at the edge of the clearing began to rustle and to glowing yellow eyes appeared in the shadows. Castor's blue eyes began glow as he felt the magic boiling in his blood.
Without warning, a gray and black blur lept from the brush and tackled Castor to the ground. Castor hissed and blinked to focus his vision.
A queen was sitting on top of him. She was all gray, aside from her paws, which were black with white tips. Her hind feet, which were black. And the tip of her tail, which was black. He focused on her face. Around her eyes, there were swirled black lines. Her eyes were huge and rabid with rage, and a golden color. His attention was pulled to her right paw. Around it, there was swirling purple magic. He gasped.
"Your a mystic." He whispered.
She sneered, "What was your first guess, Tom?"
He sighed, "Get off, I'm a mystic too."
The queen narrowed her eyes, "Prove it."
He looked over at a stck lying next to them and made it fly into the air and towards the woods. He glanced back at her, "Happy?"
The queen nodded and jumped off of him. She held out a paw and helped him to his feet. Castor instinctivly looked around for Vicki. He saw her blue eyes shining in the woods. He sighed, "Vicki! Come on out!"
The kitten instantly teleported to her brother and clung onto him for dear life. The queen eyed the little kitten, "Is she your kit?"
Castor rapidly shook his head, "No, deffinatly not. She's my baby sister."
"So do you have a name?" He asked
The queen nodded, "Oh, yeah. My name is Stephina. Yours?"
Castor smiled. Stephina. "My name's Castor." He said, he gestured to his sister, "And this Vickidalia."
Stephina croutched down to Vicki's level, "That's a really pretty name."
Vicki giggled, "Thank you. Are you gonna stay with us?"
Stephina laughed, "I dunno. I knda like to be on my own."
Castor shook his head, "No, I insist. A small queen like you shouldn't be on your own."
Stephina laughed again, "I think I can take care of myslef. As you noticed." Castor blushed. She continued, "But I'll stay."


Chapter Two
After getting Stephina settled into their den, Castor told Stephina to watch Vicki and went for a walk.
Castor sighed as he walked on the banks of the lake not far from the den. He swished his paw in the water, wondering why so many cats hated it. Water was so peaceful, calm. He looked up at the full moon and closed his eyes, relishing in its glow. All mystic cats drew their powers from something, Castor got his from the moon.
A loud yowl gt his attention. His eyes shot open and he got ready to pounce. A splashing noise came from the other end of the lake. Castor narrowed hios eyes and crept to where the sound was coming from. The sight was almost humorous.
A small orange tom was in the water, swatting and bting at a huge trout. Castor laughed, "Need some help?"
The tom looked Castor's way, "I cought a fish!" Castor laughed again, "Looks more like the fish caught you."
The tom only swatted at the fish again. Castor sighed and grabbed a stick with his teeth and went back to the water's edge.
"Grab this!" Castor muffled out.
The tom quickly grabbed the stick and Castor dragged him on the shore. The tom caughed and sputtered. Castor smiled, "What's your name?"
The tom shook out his long orange fur, "Quil." he said. Quil then looked at Castor and gasped. Castor cocked his head, "What?"
Quil's eyes were wide, "Your a mystic, aren't you."
Castor cursed, "What are you gonna do now? Turn me in?"
Quil shook his head rapidly, "No! Even if I wanted to, I doubt I could."
Castor had to agree, Quil didn't look much older than Vicki. "What are you? A mystic?"
Quil shook his head again, "No. Well, kinda. I'm half mystic. My dad was a mystic."
Castor's eyes widened, he had never met a half mystic before, "So what can you do?"
Quil smiled, "I can read cats."
Castor nodded thoughtfully, sounded interesting. "Do you have any place to stay?"
Quil shook his head sadly, "My dad was just captured a few days ago."
Qastor patted the young tom on the back, "Do you wanna stay with me?"
Quil looked up and smiled, "Sure! Do you live by yourself?"
Castor shook his head, "No, my little sister and our friend live with me."
Quil nodded, "So yout sure I can stay?"
Castor smiled, "Of course."
Castor led Quil back to the den, met by two exited queens. "Another cat?" Vicki asked.
Stephina eyed the tom suspiciously, "Is he mystic?" Castor explained the situation to the queens, Vicki was elated. Stephina was a little less enthusiastic.
Castor ignored the queen's glares and introduced everyone, "Quil," He gestured to the young tom, "This is Vickidalia, my little sister. And Stephina, another mystic."
Quil smiled at them, "Hey there!" Vicki beamed and tackled him, "You wanna play?!"
Quil nodded and chased Vicki outside the den. Castor smiled as he watched the kittens. Stephina stretched and curled into a ball. Castor next to her, "So what's your story."
She didn't even open her eyes, "I don't have one."
Catsor frowned, "Everyone has a past."
"Not me."
Castor sighed and slid down on his stomach, "I'm not goin to get anything out of you, am I?"
Stephina giggled, "Nope."