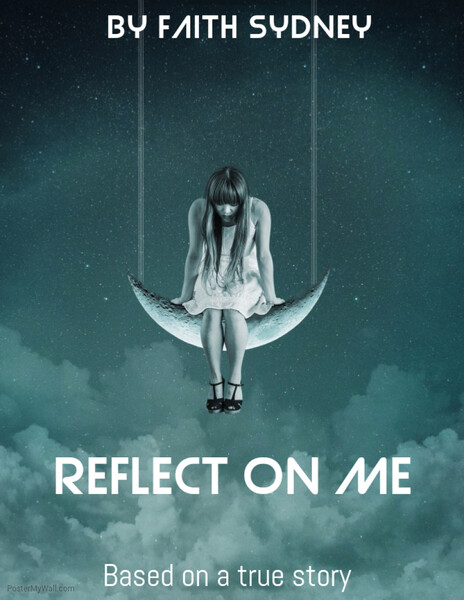 Dr. Ora walked in the door, he had his clipboard and a frown on his face. "Hannah, I have some bad news for your daughter." She looked at mom. Mom's face automatically drooped.

"Your daughter has a rare disease, Achromatopsia." Dr. Ora looked at me as I started at mom, questionable.

"Achromatopsia?" Mom looked at the doctor like she's crazy.

The doctor sighed, "it's a disease where children, teens, adults, etc, have eye loss, mainly in light. And it's a really uncommon disease. And if your in the light often, it could lead to blindness."

"Ruby? Blind?" Mom has her mouth open like a perfect circle. "Achromatopsia?" Mom just kept saying that to herself as her hands fisted into a ball. "Doctor, there has to be an explanation!" "Ruby has to use sight!"

Blindness means I can't see? Now this was getting bad.

The doctor put her hand on the wall. She grabbed the light switch and turned it downward. The room was dark, "I'm sorry, Mrs. Hannah, this isn't a mistake. The eyesight can't grow back, but you must keep most of the lights off at all times. There's no medication at the moment."

I looked afraid. I wanted to see! How do I know if my hand is in a pickle jar or if I'm eating an apple and not a mushroom? I didn't want to be blind. The doctor said darknes. I guess I'm going to have to hibernate like bunnies when I get home.

As I'm driving, I feel the tears streaming down my face as I see Ruby in the rear view mirrior. I had to put a mask over her eyes to keep her off the light. Achromatopsia is a rare disease, but it's dumb doing it this way. I could've sworn medicine was invented for this ridiculous crap!

When we reach home, I undo my seat belt as I sniffle. I sigh as I hold the handle to my car and open the door. I close it as I look in the window in the back seat. Ruby's red hair is all messed up. We had a checkup so we weren't able to fix it, we rushed. As I open the back seat door, I take ruby out.

"Will I become blind?"

I knock on the front door, my husband is home early.

"Mommy?" Ruby says again. "If I get blind, how will I stop myself from big kids picking on me?"

She's being picked on? That's another hell of a problem to deal with!

"You won't honey." I say as Warren, my husband, opens the door.

"I'll tell you later." I say as I see Warren looking at the mask Ruby has on.

Warren takes Ruby as I storm down the hall. I grab the doorknob and sling the door open. I lay on my bed, not knowing what to do.

"Ruby?" I look at her like something bad happened.

"I'm not gonna be blind, daddy." She said as she faced me.

"Achromatopsia." Mom mutters as she comes into the kitchen. "You know what it is..."

My brother, Devon, has Achromatopsia.

"If we stay in the darkness and not in the light she won't!" Mom sorta shouted, too.

I sighed, Ruby, I'm going to take off the mask, and you go play in your room." I told my daughter. "Turn off the light there, too." She was tall, she could reach the switch.

Ruby nodded as she slipped the mask off over her head. I put her down and she went to her room.

I hugged Hannah, "it'll be okay." Like Ruby told me.

"Mommy, I don't wanna go!" I said with a grumpy attitude.

"Ruby, why don't you wanna go to school? You love school!" Mom said, sounding confused. "Well, I didn't want to, that's why!" I huffed as I turn around, crossing my arms. "Ruby, get your dress on, you are going." I heard my dad say from the hall. He is a good listener.

I was getting, I think it's called bullied. My teacher always has to turn some of the lights off. It makes the students angry. And that's why they bully me. They push me, and purposely turn on the light when the teacher has to do something. They also call me "Blindy."

At school, the teacher switched off a light, "okay class, today we will be learning about days of the weeks!" Mrs. Hamilton said excitedly.

"How can we see in the dark?" One of the bullies, Noah, said.  His friend, Marty, laughed. "Noah, don't be mean to Ruby because of her eyes. She couldn't help it!" My best friend, Madeline said. "Oh yea, shorty? Whatcha gonna do about it?" Marty said, putting his hands on his hips.

"Enough! Let's do all seven days of the week, shall we?" Mrs. Hamilton said, a little irritated. Mom says that when she is in a bad mood. She told me irritate means annoy.

"Okay, repeat after me." The teacher said, holding up signs which looks like names of the days of the week on it.

I decided to stop listening, I was so scared of Noah and Marty. But I can't tell mama! She'd make me do something about it! And I might get beat up.

"How many days are there in the weeks?"

"Good job, Ruby!" Mrs. Hamilton smiled a big smile at me. I smiled back. When I turn my head, I see my eyes are getting worse each day. I think I WILL go blind soon...

it's the author, I know it's a short chapter, it's 10:30pm writing this, I don't have much writing time anymore. I am volunteering at my church for vacation bible school this week! So I will try to update as much as possible! You guys love this so far and I appreciate it!

Widmung:
Dedicated to a certain kind of mom. A blind one. Her daughter was getting married, and so she wanted to see it. But a new invention , Glasses. Yes, glasses. And when she put them on, she could see her daughter walk across the aisle and get married. And so that interested me and I wanted to make this book!