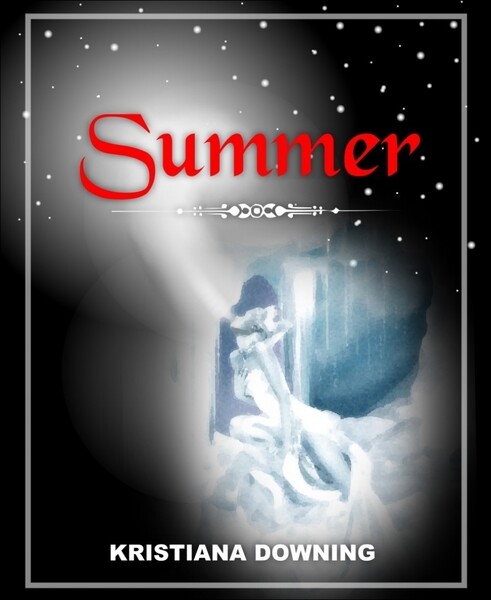 Snowflakes descended across the earth, capturing it in pristine darkness. A field of rolling hills and peace was not the snow’s only prisoners. A girl lay in the middle of the white-clad field, eyes fixed on something I did not see, a heaven I might never know.

In a stark contrast to the field, her long midnight hair spread out around her in a halo of darkness, more pure than the bits of white falling like tears on top of it. The flakes mourned for her too.

I crept toward this ethereal creature praying that she still held life in her. My duties forgotten, I kneeled down and touched a frozen fingertip to her cheek. Time became as solid as the earth it created, as my breath caught in my throat.

She was warm, like the summer sun from a time I am not allowed to remember. A time that brought smiles instead of abuse, love instead of an empty hunger that never seemed to fade. Her eyes flicked upward and locked with mine. “Hero” was all she said and I knew I had been saved.

Almost a year had passed since that day, and once again we were in the midst of another harsh winter. They took her in, as I knew they would, but what choice did I have? She would have died out there. I chose the lesser of two evils, or so I had thought.

“We’ll ride away on the white horse tonight.” Summer whispered, and I almost feared her words would break as she had.

I nodded, forced a smile, and when I offered my hand, she clung to it as if it were salvation. That is what I intended for it to be. I would take her to freedom.

As she stood, her tattered rag we used as a dress hung limply from her shoulders and fell just above her feet. Bruises trailed her arms and two kissed her throat in a promise of death. Her eyes that once held the sky of a warm summer day had long ago faded and became a cold rain filled autumn morning, trapped in an everlasting mist. When her eyes found mine, she smiled. The spring to come shone through. Summer had never looked more beautiful.

We walked in a memory that did not hold the darkness that we faced. Swiftly but quietly I lifted the wooden plank that held the hole I cut in it earlier that day. I pushed Summer up into the frozen winter night and followed. My heart sang songs of freedom even as the snow covered ground stung through my makeshift shoes. I lifted her onto my back and started away from the cellar, the hell house, and all our bad memories.

“Hero, the snow is helping us.” Her voice sung out with the wind, sounding stronger. The darkness in my mind fled and determination took its place.

I looked behind me and my footprints were already beginning to fill with snow. I trudged on, making my way into the comfort of the trees. They hid us well, but I could not rest yet. I could not fail her again.

By the time we entered the clearing, the place where this mad journey began, I felt rejuvenated. I was sure my body should have been freezing, forcing me not to take another step.

“Home.” she breathed into my ear. A sudden warmth surrounded me that words could never convey. I kneeled down to ease her from my back but she was already off me, grabbing my hand, pulling me to the middle of the field. “Home” had become a mantra spoken almost silently by a now smiling Summer.

We ran to the middle and she collapsed into the snow, pulling me down with her. We lay there on our backs looking up at the night sky. I could no longer tell where the stars were. They seemed to melt into the background. Icy falling stars swirled around us and we made the same wish on every one, to be free.

After what seemed like an eternity of contentment, my mind began to grow hazy.

Summer looked at me through snowy lashes and grabbed my hand before she spoke. Her voice sounded foreign to my ears, her face seemed to glow with happiness. She reminded me of a porcelain doll, so fragile, yet she had eyes filled with an odd wisdom.

“Hold on to me and we will ride off into the sunrise.”

“And live happily ever after?” I asked, words slurring. Despite my growing exhaustion, I still felt silly waiting for an answer.

Through heavy lids I saw pinks and reds illuminate the sky, bringing a warmth to my mind. Just as the sun stretched over the horizon and I started to fade away, a whisper caught on the wind and made it to me before oblivion did. The last word I would ever hear in this life was soft but meaningful.

“Check over there!” A man with stern eyes screamed at a group of young teenagers, his gun pointing to the trees.

The children marched onward, hearts pounding. There were no footprints to follow. When the clearing came into view, the snow sparkled in the morning light, showing beauty to hearts that had forgotten the way happiness felt.

Warmth spread through every person, except the Man who had started making his way to the middle of the field. His body went rigid, eyes wide in shock, gun tumbling to the ground. Every eye made its way to the man’s feet and gazed in bewilderment. A gunshot rang through the clearing and the man fell. Next to him, two human shaped hollows rested. The silent snow continued to fall but to no avail, the holes would not fill.

The wind drifted gently through the field of confused children. A whisper, soft and melodic, danced on the breeze, resonating deeply in their minds, engraving eternal meaning into their hearts: “Freedom."