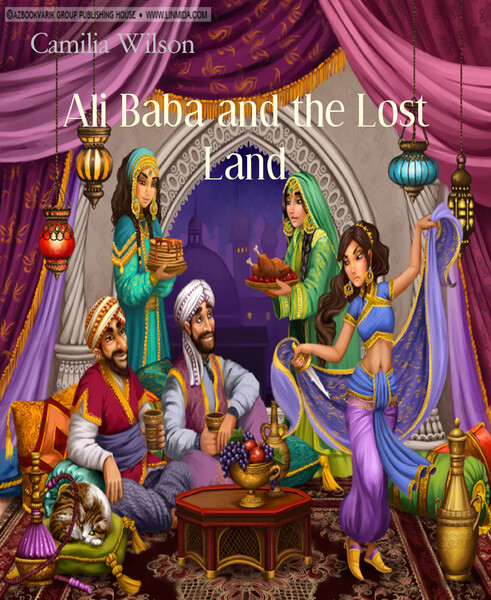 Ali Baba and the Forty Theives, Ali Baba and the Robber Cheif's Revenge... don't we all know these stories? Now this all new sequel to dear Ali Baba's story, it is much more imaginative, much more unexpected...

"Shahrazad, what story is it that you are going to tell me today?" King Shahryar asked his wife when he got on their royal bed, with candles lighted up around them. Shahrazad looked at King Shahryar, and with a mysterious yet bold voice, said, "Do you remember Ali Baba and his treasure found in the cave of the forty bandits, my wise and merciful husband?"

"Of course. My dear Shahrazad, you're not going to tell me that he has died, are you?" the king said, frowning.

"No, but surely, you would like to hear the story of Ali Baba's son..."

Ali Baba and the Lost Land

Since the days Ali Baba had built his palace on top of a hill, and since the days that Ali Baba built a farmhouse for his son and Marjanah, who have happily married, nothing strange or out of order had happened in their cozy family. About two years have passed, and on a bright morning, Ali Baba had gathered his family by going to the farmhouse with his wife. He had planned and decided that he would be setting out on a journey on his own to the West Lands-mind I tell you that those are the land unspoken of; the most dangerous lands, filled with ongoing deserts and never-ending sandstorms that could blow and whisk a man to the moon. Though his wife, his son, and Marjanah all tried to stop him, he was a man of steel. His decision firm and unchangeable. So the next day, Ali Baba set out, promising to send letters to his family every day at the small desert inns in the West Lands, and they wept, for they were almost certain this was the last time to see dear Ali Baba's face.

After two long weeks, having Marjanah waiting at the farmhouse mailbox every day, the address that Ali Baba sends the mail to every night, that one night, the usual mail boy didn't turn up as expected. No mail arrived the next day, or the day after that. A few weeks passed, and still no letter arrived. At this point, Ali Baba's son and the two women, as expected, were panicking. A long meeting took place within the three, and they finally decided that they would set out together, no matter how dangerous it was, to go to the West Lands and search for Ali Baba. The next day, even before the sun was up, Marjanah, Ali Baba's wife, and Ali Baba's son were already on their way to the humongous desert-the West Lands.

The first few days of thejourney was decent and adequate, courtesy to the desert inns, but Ali Baba wasnowhere to be found near the inn-zone, the not too dangerous part of the WestLands. With a heavy heart, the three kin of Ali Baba realized that they wouldhave to venture on into the dangerous part of the West Lands: no inns, nopeople, no civilization, but sand, more sand, and sandstorms. Oh the dreadfulsandstorms! Ali Baba’s wife, son, and Marjanah were most concerned about even making it through five minutes of the sandstorms! No one who went further came out to tell the tale.

The three people have been riding on camels in pure desert for about three days, and no strong sandstorms have caught up to them yet. Ali Baba was nowhere, and they have begun to give up hope. In a few more days they could all die. But they kept on their journey for another two days until they were about to meet their fate.

Riding on the dreary camels was too slow and too much for the animals and humans, and at one point the three had to come off and walk by themselves. Not long have they been walking, a little red fox approached them.

“Oh, Allah! Is the red fox you have sent us a sign? Are you telling us we will be going through mischief and hardships as foxes are mischievous?” Ali Baba’s son cried out. The red fox did nothing, but tapped its left foot three times, looked at the three surprised humans, and kept on walking. Marjanah, the exceptionally bright and smart wife of Ali Baba’s son, took this as a sign of following the red fox. Ali Baba’s wife and son remembered that Marjanah had saved the family multiple times, and decided to believe Marjanah. They all followed the red fox. Just a few minutes passed, and a sandstorm approached. It grew bigger and windier, and the three humans began screaming out Allah’s name, crying for mercy. They were so busy and caught up with the fear of death that they didn’t notice that the red fox had gone.

“Dear mother! Dear wife! I cannot do anything but to treasure this little time given to us by Allah, for we will get whisked to the moon! Whatever has happened to father, I beg that this did not happen to him! A man can only go through so much!” Ali Baba’s son felt that the sandstorm was tearing him apart. Trust me, my friend; you will not want to go through something like this. Marjanah, in this dreadful time, suddenly noticed that the red fox had gone.

“My dear husband and mother in law, where has the red fox gone?” Marjanah asked slowly, despite the fact that she was being torn apart and blown away like the others.

“Who cares about the red fox? It has done nothing but lead us into this sandstorm! Who can trust a fox?” Ali Baba’s wife said, crying. Marjanah took hold of as much control has she could on her little body, and like the red fox had done, she tapped her left foot three times gently on the ground. Within minutes, the sandstorm stopped. They were all so surprised and shocked, but at the same time, laughing and crying out to Allah for Allah has great mercy, and has spared their lives. Not long after the sandstorm stopped did they notice that they were standing on a beach, facing a small sea.

“Why would there be a sea, in the middle of a huge desert?” Ali Baba’s wife asked. The other two didn’t answer her, but rather notice that about a mile into the small sea, there was an island. A washed up canoe fit their needs, and they all climbed in, rowing to the island.

The island, surprisingly, was filled with houses, shops, and the biggest shock of all, humans! Everywhere on the island, there were humans smiling, playing, selling things, and buying things. But such a small island meant only a few hundred people lived there. Marjanah went up to an apple seller and asked if he knew someone named Ali Baba. The apple seller replied joyfully, “Dear old Ali Baba! Of course. He lives in a lovely house by the beach on this island. Just walk a few more minutes and you may see it.” So the three did as they were told, and sure enough, found a house on the beach. It was one of the only houses on the beach. With excited minds and hearts, they knocked on the door, and Ali Baba opened it. He first looked surprised, then shocked, then started smiling and crying, and they all threw their arms around each other, for the joy of family is strong. After some time, Ali Baba gathered them all around the dining table in the beach house, and told them all about the island.

“This is not an island, my family, but it is a piece of mainland that somehow got separated from the mainland, getting surrounded by water. On this land, we may mine underground as much as we want, because it is full of beautiful gems! Diamonds, sapphires, rubies, emeralds-any jewel you can think of,” Ali Baba said.

“How did you get here, father?” Ali Baba’s son asked.

“Ah. That was just a month ago,” Ali Baba said, “I encountered a red fox, and I went through a dreadful sandstorm… mind we not talk about the sandstorm! But the red fox somehow led me here, and I met all these people. I should’ve sent letters to you all, but on this island, no letter could be sent out because of the sandstorms.”

“Father, do you know if we could go out of this island? I mean, go past the sandstorms surrounding it?” Marjanah asked. A silly, little woman would only think of the wealth and richness the island had, but Marjanah was different, as we all know. She was much brighter and wise.

“Yes. We just need to wait until the red fox appears again, and whoever wants to leave the island may leave. But you never know when the red fox would come,” Ali Baba said. So the family lived in the cozy house of Ali Baba’s on the lost land, and they mined for beautiful treasures. One day, a few months after the family reunited, Marjanah found out she was pregnant with her husband’s baby. The joy was worth a celebration for the baby by having a parting and inviting the whole island. Marjanah was overjoyed to know that soon she would be having her own child.

The child was born eight months later, and she was a lovely baby girl. The parents named her Shanah. Ali Baba and his wife were happy, and they kissed the baby girl, their first grandchild. They didn’t know yet, that three years later, they would return to their castle and farmhouse in Arabia, but they know that they will always be, if not, but Ali Baba still took it into his head, and said in many occasions, that he was the richest man in the world.

“That was a beautiful story, Shahrazad,” King Shahryar said, after Shahrazad finished the story.

“Beautiful, of course. Don’t you like the ending? But now, my husband, I need to get dressed, for I do not want to keep the swordsman waiting. If you could’ve heard the story of the thousand apples…Oh, don’t mind it,” Shahrazad said.

“Stay here, and you shall tell me the story tonight,” King Shahryar said.

“To hear you is to obey,” said Shahrazad.

Widmung:
To my English Teacher of 8th grade, who gave us this assignment at school, and for giving me inspiration of publishing it online also.