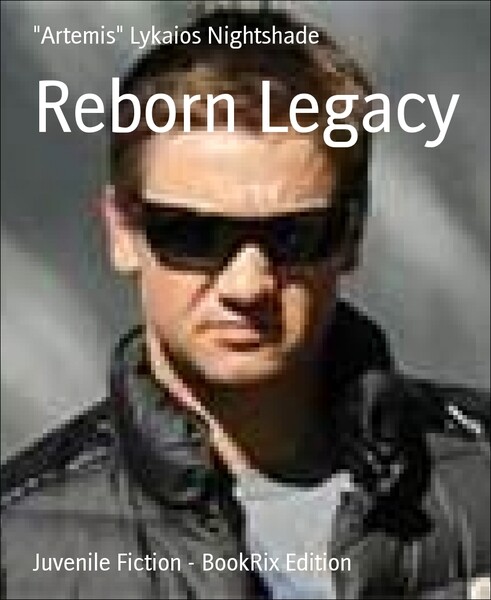 Agent Cassian waited on the docks for the cargo ships to park. The sun beaming down on his glorious figure with his eyes protected by sunglasses, he surveyed the place until his cellhphone vibrated in his pocket.

Reaching out inside for his pocket, he flipped it open to read the Caller ID-Agent G. Samus 90. A ghost of a smile formed on his chapped lips as he pressed the phone against his ear.

"In what news do you have to call me?" He asked clearly hearing the low chuckle of the caller.

"Is this how you're always going to say 'hello' baby brother?" Germain Samus asked sarcastically.

Cassian's smirk turned into a borad rare smile, everyone knew Cassian was hardly the one to ever say 'hello'. He stopped when he was 18, the time he started being a 'slave' for Hawkeye society.

"Anyways, we are about the bort back home, should be in less than twenty." Germain said while piloting the jet towards it's destination.

The dark red haired man nodded in reply then told him he will met them at the airport. Haning up, Cassian took one glance at the cargoships, theywere about done so he didn't need to survery anymore or any longer.

Grabbing his coat along the way, Cassian threw it on himself then adjusted his tie. Once he reached to his black suzukimotorcyle (http://images.classiccars.com/classifieds/142361_10728855_2009_Suzuki_Motorcycle.jpg) Cassian placed his helmet on, kicked the brack up, and started the engine.

Agent Germain Samus waited patiently for his brother to arrive. He knew calling him 'baby brother' was bad but not as bad as one calling Cassian 'Cassy' and/or 'Zero'. Germain leaned against the stoned collum with a hidden smile on his face, he remembered a certain girl in their childhood life who used to drive his brother mad, Katryna Holmestead. She was now the wife of the same man whom she drove mad, Cassian.

'What a couple.' He thought sarcastically to himself as his chulffer gathered the last of his bags in his limo. Agent Germain decided to ride with his brother on his Suzuki motorcycle. He wanted to feel the wind and cool off.

It was a very hot year in Danul Thalis but the Thalians are very much used to the heat as they lived in it longer than the cold. They didn't mind the cold either. Both Cassian and Germain were born in the dead of winter, a blizzard more like it.

The unmistaken sound of a motorcycle came closer and closer to Germain. His tie, coat, and hair flew against the wind as he jerked his head to the side. His hidden smile showed itself and Germain began walking towards the man.

"About time, thought you lost yourself or had trouble with traffic." The dark brown haired agent said getting on the motor behind the man.

"A little bit of both." The man, Cassian said, his tone sarcastic and rare.

The agent gave an extra helmet to his older brother to put on before starting the engine back up.

"Oh, by the way. We're going to need gas." He said, not looking at his brother who raised his eyebrow in both response and mock horror.

On their way to a gas station, a red light hit and every vechle came to a complete stop. A silver and black honda came on either side of the brothers, both sides of their windows rolled down reavealingeight men on each side of the hondas.

Keepingtheir head towards the horizon, both Cassian and Germain used their eyes to shift towards the men in the hondas. The ones in shot-gun began taking out their guns and so did Germain, but before anyone could shoot, the lights turned green and everyone bolted fowards.

Cassian decided to drive them out of harms' way. Germain took out both of his guns, loaded them quickly, turned himself around so his back was behind his brother and began shooting as did the four men.

All windows of the honda were open including the sun-roof. Two in the back seat stuck out half their bodies out and began shooting with machine guns. The sounds of the gun shots alerted the police as they sent for back-up.

Germain shot and dodged every bullet that came while Cassian drove and took out his gun. Looking through the veiw mirror and the rode, Cassian began shooting at the men without so much as glancing another look in the veiw mirror or turning his head.

"Who are they?!" Agent G. Samus shouted out, killing two out of eight.

"The real question is what. Look closer." Cassian shouted back, making a jerked turn towards the right as the the two drivers.

"Oh sure, slow down a bit so I may take my closer look at them." He said sarcastically. Cassian rolled his eyes and went up a ramp, sending them all flying, the drivers did the same.

Germain took off his sunglasses to take a closer look at the ones on the sun-roofs. Their eyes were unlike anythinhg he had ever seen, they were of both fire and water, no pupils in them at all. The agent's eyes widen. G. Samus took out his special gun, Lightening Strike, a gun whose bullets sends shock waves.

"Fire and water, no pupils, and definetly not human." He said, shooting at the ones on the sun-roofs. The two began jerking all around, the shock waves doing its business until they were dead, electorcuted.

Cassian nodded his head then notice other vechles heading towards him. 'Not now'. He thought to himself but as he came in closer and closer, he started to notice a man in the driver's seat and a woman.

A rare, relived smile formed on his lips as he made a U turn, surprising his brother.

"Wh-What are you doing?!" He asked, taken aback by his brother's madness by going towards the enemy.

"Trust me." Cassian simply said leaving no room for protesting.

Taking his word, Germain turned around and began shooting some more from behind his brother.

"Place your weapon down until my signal." The agent said his tone concetrated.

Agent G.Samus did as he was told and placed his weapon down but fully loading and ready for the signal.

Cassian Zero pushed harder to make the motorcycle go faster, he jerked it upwards sending the two leaning back, Germain held on to his brother with one hand and the weapon in the other. The dark red haired agent then made the motorcycle jump in the air, leavinga clear veiwing for Setanta and Kayrna.

Germain pulled out his weapon and began firing from above as Setanta and Katyrna began firing as well until the two cars began to explode, fire ranging up with smoke.

The two bothers could feel the heat and smell the smokes at the motorcycle landed on the ground hard but safely. Cassian turned his motorcycle around to watch the remaining explosion until there was nothing but sparks, a bit of remaining fire, and smoke.

Setanta drove his Spyder towards the brothers careful not to scratch it for it was one of his pride and joy. The sounds of sirens reigned through the city of Danul Thalis.

"Thought you needed help." Setanta said, getting out of his car once he parked.

"We were doing just fine as you can clearly tell." Agent C0 explained his eyes only on his wife who came up towards him.

Cassian looked into his wife's eyes, his emotion showing clear love and concern.

"I do love you Cassy," Katryna began recieving a low groan from him. He still hated begin called 'Cassy'. "But you need not to be concerned of me. I'm an agent and sharp-shooter as well. I can take care of myself."

A deep said exhaled from the agent's mouth but he knew his wife had a point. She wasn't a damsel in destressed or a woman needed protecting, she was an agent well more than that, she was his wife, the best female sharp-shooter and a teacher for newly younger agents.

"You are right." He said, taking his wife closer to him to kiss her.

Setanta came by and stood next to Germain who was watching the policemen, careful not to distract anyone from doing their business.

"How did you know?" He asked, not turning to face the dirty blonde man.

"I know everything Agent G. Samus. It is one of my special abilitiesm, remember? I can predict the nearby future, that's how I know you need help." Setanta explained, crossing his arms against his broad chest.

The dark brown haired agent took a small glance towards the man, even though he was in his late forties early fifties, the man was a father figure to them. He had trained and took care of them until they were old enough to take care of each other on their own.

'Home, more like prison.' He thought to himself but walked behind the man towards his car. He noticed Cassian and Katryna rode together on the motorcycle but he did not care.

Ambulances of all sorts came rushing pass them, heading towards Hawkeye company. A worried look cast on all four's faces.

"What happened?" Germain asked, getting out of the car.

Cassian parked his motor in it's usual spot then took off his helmet then sunglasses. Together, they walked towards one of the men being assissted.

Jameson Thyme, a time traveler of Danual Thalis has seen and been all in time and space. He was mortally wounded but is still breathing.

Katryna knelt down next to him and speard a bit of blood on her fingers, the red blood instintly turned clear once touched by a living and not dying person.

"Red when your dying, white when your alive." She said, her tone both concerned and wondered.

Cassian knelt down next to his wife, took some blood for his own and began sniffing as his wife began healing the wounded time traveler.

The young agent had never seen blood turn clear when a living was touching it.

Every wounded men were taken into the hospital area were people like Katryna healed them. Silver auras reigned all over the room as they try hard and well concetrated to heal them all.

Meanwhile, Cassian, Setanta, and Germain all headed up towards the main area to speak with Malevolent, the company's current boss and owner.

"Sir, nearly every one of the organization is wounded and not healing as fast as usual. Something is up." Agent G. Samus explained, his tone concerned.

Malevolent glanced up from his work and took of his glass with a sigh.

"Things happen for a reason." He said, no emotion in his eyes or voice.

"What does that suppose to mean?! And we were instructed to guard Jameson Thyme, the king, master, lord, last of all time travelers! Without him our time and space will be at stake, ruined, chaotic," Germain siad, nearly shouting in frusteration. "Do something now!"

The agent's fist landed hard on the desk as he began breathing heavily. Germain apologized for his behaviour and voice but knew he wouldn't go unpunished.

"I shall do whatever I can if it pleases you, but don't you think I will let you go off merrily without punishment." Malevolent said, his tone cold and hidden with glee.

Samus secretly gulpped for he knew well punishments by Malevolent were just as merciless as his killings. They were torturous, in your mind, you beg and beg for him to kill you instinctly. Setanta experienced one of the punishments.

"Understood." He said with a small head bow.

A smile formed on their boss's lips as he rose himself from his chair and walked towards the dark brown haired agent.

"Now, time for your punishment Agent."