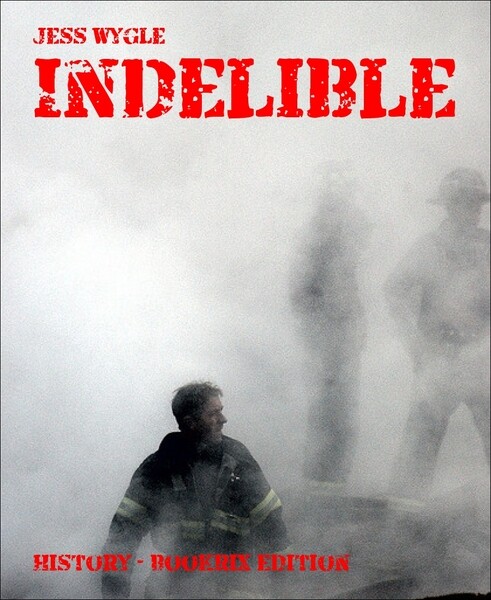 Indelible - 1. (of ink or pen) Making marks that cannot be removed.
2. Not able to be forgotten or removed.

There are moments, slivers of time, that are so cemented in your memory, so woven into your veins, that they become a part of you. They shape you to be the person reflected in the mirror.

There are events that can rock you to your core, shattering all understanding, defying belief, and testing your faith.

First kiss, loss of a loved one, birth of a child, fatal accident, these can all lead to self-discovery in one way or another. They can also lead you to look outside the realm of your own existence.

One of our most indelible moments is the unspeakably tragic events of September 11th, 2001.

I was a blossoming new freshman, roaming the halls of my high school, overhearing chatter as I ducked and dodged other students on my way to study hall. Murmurs of an explosion and whispers of death stung my ears, but I didn't pay much attention.

A rotund upper classman who sat in front of me was the first to bring the situation to my direct attention. "Did you hear the White House was bombed?" he gasped, wide-eyed. The words were so far detactched from reality, they felt like something out of Hollywood, so I didn't think too much about it. If the White House had been bombed, we would have heard about it.

Sure enough, not five minutes later, our principle came over the PA system and brought real life tragedy to the lives of hundreds of Midwestern high school students and teachers. "The World Trade Center towers have been struck by two airplanes as well as the Pentagon in Washington, D.C.," he said calmly. I looked around at the faces in the large room, mostly to gauge the reactions of the other students so I could react accordingly. Some held their hands over their mouths dramatically; others didn't seem to pay much attention, some looked just as confused as I felt. I didn't understand fully what was happening. Admittedly, I didn't even know what the World Trade Center was.

In my next class, the room had a television showing CNN's broadcast of the situation. This is when I was first introduced to that burning inferno that I'll never forget. The news anchors spoke of relief efforts, possible conditions of the tower, and eventually showed presiously recorded footage of the moments of impact. There was talk of rescue. Firemen and police had been called in from all over New York to ascend the towers and assist those still left inside.

It wasn't long when right before our innocent eyes, the first tower fell. Chills run through me as I recall the precise moment; a moment that is difficult to put into words. My naive mind couldn't comprehend what I was seeing. Not one person had even spoken of collapse so it hadn't even been a possibility in my mind. It was, in a way, the loss of hope. Hope that the survivors and firemen inside would all make it out safely, hope that maybe, just maybe the fire would be put out. It was also an omen. Everyone knew then that it could happen again. There was a desperate scramble to exacuate the remaining tower and to clear the area before it happened again.

I started to feel genuine concern and fear. The look on my teacher's face, her gaping mouth, her trembling hand, the tears I could see forming at the edge of her eyes, it was all so real, unlike the images on the television that were distant and out of reach.

Classes were dismissed shortly after. I had never before witnessed such an epically defining moment. I was so moved, I turned on the television as soon as I got home and continued watching the coverage, something I had never done before in my life. Though both towers had now fallen, footage from New York was being played over and over. Firefighters and police officers; emergency management officials moved towards Ground Zero in an effort to put a stop to the blaze that didn't want to burn out. Disturbing shots of people jumping from windows directly above and below the impact zone turned my stomach. The plume of dust that consumed Manhatten after the towers fell moved with a life its own, swallowing up buildings whole. People emerged from the cloud with soot-covered faces, some carrying others, some with trails of tears etched in their dusty cheeks like rivers breaking through the desert.

For the first time in my life, a shift happened. I was no longer me. I was one in millions. I wasn't just a disconnected victim. I wasn't alone, yet felt so utterly small. I was one of them. We all felt the same things, cried the same tears, thrust the same prayers on a deafening whisper. For the first time in my life, I wept for people I didn't know. My heart ached for the victims and their families.

As time passed, we watched tirelessly as New York's finest dug through hundreds of feet of twisted metal and shattered glass in search of any surviving souls. We saw hundreds of posters searching for missing loved ones who never came home, who never returned calls, who they never saw again. As my eyes scanned the photos, I told myself each time, 'that's someone's son, someone's mother, someone's wife, someone's brother, that person went to work that day and didn't know they'd be taking their last breath. They didn't know they'd never kiss their kids again. They didn't know they'd never see their families again.' My eyes were opened in the most jarring manner. My mind was altered in the most unselfish way.

A force surged through us in a gust. It was so profound that it moved us in a wave, all fighting for the same nameless, faceless cause. We were one; from coast to coast we all grieved and ached with every fiber of our being. We pushed on. Together, we emerged from the rubble holding our heads high in tribute and with the courage to overcome. With so much death and devastation, we still found strength; a strength we exhumed from the deepest, darkest pits of our souls. Though we were scarred, we still stood tall. Though we were broken, we found the tools to mend our wounds. For an older generation, Pearl Harbor was the day that will live in infamy. For my generation, 9/11/01 is our day of infamy. Each year on this day, we reflect, we remember, we never forget.

Texte: The cover is not meant to be sold. It is only to enhance the reader’s experience. No part of this book may be reproduced in any form. This is a work of fiction. Any resemblance between the events, characters, and/or persons living or dead is purely coincidental. Copyright ©Jessica Wygle
Bildmaterialien: Google Images
Tag der Veröffentlichung: 11.09.2012