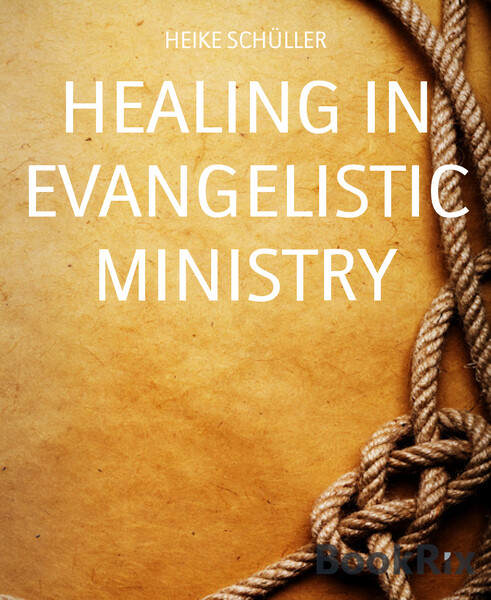 When I was working in Niger as a missionary, I had the youth group give their testimonies and came to the amazing result that more than 80 % of all conversions were caused by a healing experience of the person herself or her immediate family members. Consequently, I did some research on the correlation of healing and evangelism. This thesis reflects the research and its results.

In order to talk about sickness, healing and evangelism a definition of those terms seems necessary. In Old Testament Hebrew and New Testament Greek there are many different terms to describe sickness as well as healing. For a list of the words together with an explanation according to Strong's concordance (e-Sword, 1996-2000, Strong's), please refer to Annex 1. In general, sickness denotes a malfunction and frailty of the body but includes also a connotation of spiritual defection (sin) and its effects on the soul. Healing, consequently, indicates the restoration of spiritual, emotional and physical health. In this paper, sickness and healing mainly refers to the physical realm, though the parts of man are so closely correlated that it is impossible to exclude the spiritual and emotional realm, as will be discussed later. Generally, evangelism refers to the proclamation of the good news (Watson, 1976/1994, p. 30). This good news is the gospel of the kingdom of God. Below, it will be discussed, what this includes.

The matter will be approached by laying a biblical foundation for healing, giving some general principles on healing, discussing the correlation between healing and evangelism and regarding the practical issues involved. Considering the biblical basis for healing, the reason for sickness for humanity and the individual will be discussed.

THE BIBLICAL BASIS FOR HEALING

Within the chapter "The Biblical Basis for Healing" will be discussed:

When man was created, he was just perfect (Gen. 1:31). Man had complete fellowship with his creator (Gen. 3:8a) and with each other (Gen 2:23) (Wimber, Heilung, 2000, p. 74). In this state, there was neither sin nor sickness and trouble. Though the word "healing" or "healed" does not appear before Genesis 20:17 and the words "sickness" or "sick" before Genesis 48:1, it is clear that, when death entered the world after the fall (Gen. 3:19), sickness was included in death. According to Bittner, sickness is a forbearer of death, even a state of relative dying that is completed with actual physical death (Bittner, 1999, p. 18). Thus, it can be safely concluded, that sickness is a result of the fall, i.e. sin. There included is not only sickness itself, but also any weakness of the human body, like tiredness, exhaustion (Bittner, 1999, p. 17) as well as painful childbirth (Gen. 3:16) and female monthly trouble. Consequently, there is a profound connection between sin and sickness.

Though the above is certainly true for humanity as a whole, it is important to note that the disease of an individual might not be due to personal sin. The reaction of God on the friends of Job (Job 42:7), who attributed Job's sickness and suffering solely to personal sin (e.g. Job 36:1-12), as well as Jesus statement over the blindborn in John 9:1-3, shows that not in every sickness personal sin is involved. Nevertheless, this might be true in some cases as may be derived from Luke 5:17-26 or James 5:16.

Although sin is at the origin of sickness, it is not the only cause of disease in the world. In Job 2:1-10, Satan is shown as the one to inflict sickness on Job. This corresponds with the teaching of Jesus, who presents Satan as a thief, destroyer and murderer (John 10:10). Other New Testament passages confirm that Satan and his demons can be the cause of sickness (Lk. 13:10-17; Lk. 4:39). Wagner distinguishes three ways in which Satan is able to inflict disease on man: first, he works sickness directly, as in the a. m. cases. Second, he uses the results of the fall, like bacteria, malnutrition, accidents, fights, poison, age, murderers etc. Third, the devil tries to get man to sin, in which case sickness or even death might be a punishment of God on the sin (Acts 5:1-11; Acts 12:23) (Wagner, 1989, p. 97-98).

Because of the fall, man is now living in a world, where sickness and death is present and this already may be the cause of individual diseases. Satan might also use this fact to cause suffering, but he might also act directly or try to get people to sin, where sickness might be either an inherent result or a punishment of God. God uses sometimes diseases as a device for His purposes. In any case, it is not advisable, to hold a person responsible for his or her suffering without discerning the causes.

In the following God's provision how to keep health in a fallen, sickness-stricken world shall be examined.

Health and the Law

In the Mosaic Law, there are many provisions that on a first look seem to be rules for the religious life but turn out to be sound regulations to keep a people spiritually, mental-emotionally and physically healthy. Certainly, the supernatural blessing of God because of the covenant with Israel was the force behind Israel's health (Deut. 7:14-15) as long as Israel would honor God and be obedient to Him. Nevertheless, one purpose of the Law was to teach Israel in wise behavior (Deut. 4:6), so it is safe to assume that some of the regulations were public health laws.

On the spiritual side, God provided the possibility of a relationship with him through His word, prayer, the tabernacle, the sacrifices, the feasts, the priesthood, and last not least to love God with all the heart, mind, and strength (Deut. 6:5). Especially, the possibilities for the forgiveness of sins and restitution to God and man will keep a person spiritually, mentally as well as physically healthy.

For mental and emotional health, there are provisions for peace among family members by the command to honor the parents (Exod. 20:12), the command to teach the children God's ways (Deut. 6:7), the prohibition of adultery (Exod. 20:14) etc. There is a command how to deal with anger and to avoid bitterness (Lev. 19:18) that also causes many psychosomatic harms. By thankofferings and praise, Israel was kept from ungratefulness (Deut. 8:10-11) that results in discontentment that has negative effects on physical health. By the feasts, Israel was to experience the fellowship and joy (Deut. 14:22-29) necessary for physical and emotional wellbeing. The prohibition of jealousy (Exod. 20:17) also helps to keep soul and body in a healthy condition (Prov. 14:30).

In the physical realm, the Law provides for sufficient rest by keeping the Sabbath and connected regulations (Exod. 20:8-11). God also protects from murder and willful hurts of others (Exod. 20:13; Exod. 21:12-24). Certain regulations on sexual intercourse keep a person from venereal diseases (Exod. 22:18; Lev. 18:1-19,1) and from the consequences of incest. Nutritional commandments like the prohibitions to eat blood and grease as well as to refrain from eating different animals protect from many diseases by keeping certain dangerous elements low that otherwise would harm the body, like cholesterol etc. Quite a couple of regulations order the hygiene conditions. To keep infections from spreading, women with bleedings should not be touched nor anything that came into touch