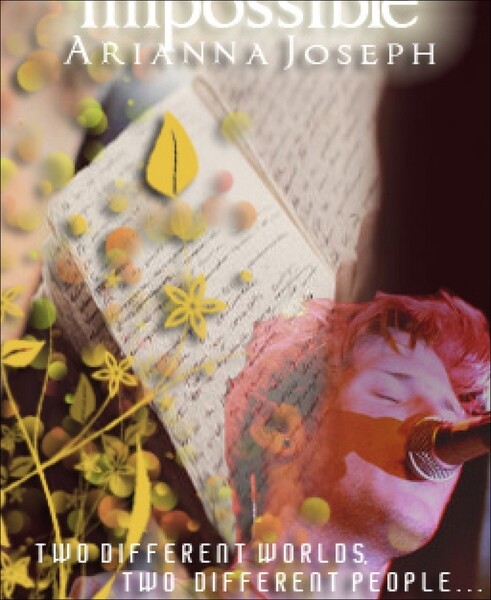 May 17 2006
Islelynn Elle Jacks
He entered the Lake Wood building. Everyone was screaming his name. Claudia and even Kara and Nicole were even screaming his name. I looked at them in total disbelief. I wasn’t his biggest fan or his fan at all; I only listened to his songs. Some.
I knew I was exaggerating, but it’s not like he’s going to be staying here for the whole semester, he’s sixteen! Your probably wondering who I’m talking about. Well you should know by now, I did make it obvious.
Devy Bleu.
Yep he’s at Lake Wood why? A ‘concert’, Dr. Richmond had it all planed, he paid for the whole school, but he didn’t have to pay for everybody; because I’m not going. Nylie was screaming right into my ear, and I swear if she doesn’t stop I’m going to strangle her.
“Oh my god! Isle he’s here! He’s actually here! I love you DEVY BLEU!” Nylie yelled again.
“Nylie if you don’t stop yelling right in my ear I’m going to kill you right in front of the whole school” I snapped, everybody lined up. We were entering the cafeteria, they had 8th grade go in for the first part and 6th is the last.
“Sorry” she said annoyingly “But you know how much I love Devy” she sighed dreamily.
“More than Brian?” I asked.
“Heck yeah” she said, I smiled.
“Well I hope you enjoy the concert” I said turning around, she grabbed my arm.
“Wait, I’m sorry” she said with pleading eyes.
“Nylie you didn’t do anything, I just don’t want to go” I said, she flinched off my hand. “It’s ok, I’m sure your going to have a good time, and I’ll just stay out in the courtyard.” I said.
“Hurry up girls” Ms. Morris said, Nylie left me and went inside. I sat at one of the tables they provided for us. Just in case the cafeteria filled up.
“Oh look Arthur its smarty pants” Will laughed.
“Really?” I said annoyed.
“Why are you here?” he said.
“Why are you here?” I mimicked.
“Rosie’s getting a snack, she’s in the cafeteria” Will said sitting at my table.
“Of course” I whispered, Rosie’s my friend, and Will’s girlfriend. “I’ll see you guy’s later” I said heading for the bathroom.

By the time the concert was done we were heading for fifth period, we had lunch in our classroom. The rest of the day I had to put up listening to Kara, Nicole, Claudia, Nylie and other girls talk about Devy Bleu’s beautiful singing.
He’s a singer, what did they expect?

The bell finally rang. School was over, no more Devy Bleu talks.
“Bye Mrs. Lively” I waved.
“Michael I need to ask you something” I said, I know a few Michael’s most of them are annoying.
“Ok” he said.
“You like Devy Bleu?” I asked him.
“No” he answered.
“Ok, bye” I hated being around Michael Roland’s company he was so weird.
I entered the cafeteria and saw that they were taking down some of the things they used for the ‘Concert’.
“Sorry guys, but today we don’t have snacks” Mrs. Lola said, Mrs. Lola is like my second mom.
“Hey Mrs. Lola” I waved.
“Hey” she smiled, I signed into computers. Everybody was talking mostly about Devy, but I didn’t listen. I pulled out a book and started reading.
“Islelynn can you hold my keys?” Mrs. Holly asked
“Sure” I said, she went to go re-count everybody, make sure everyone is not skipping out.
Once she did that, everyone stopped what they were doing and headed into the first building, to the library. I didn’t usually go on computers, I read. So that’s what I did.

September 28 2009, St. Augustine, Florida
Islelynn
“Oh come on, Isle” Greg argued. “You’re making this so difficult!”
“I’m not; you’re just not listening to me! I told you already what I wanted for my life.” I objected, I felt the tears running down my face. “Why won’t you understand?” I whispered.
“We’ve been dating two years, Islelynn!” he said softly “I think now that you’re seventeen almost eighteen that you can make a decision like this.” he paused and looked away “I thought you loved me”
“I do!” I urged “I do Greg, but I told you, I’m so young, we’re both so young . . . there’s so much things we could do and achieve without having to be stuck in that” I suggested and he turned away.
“You don’t really love me, Isle. Or you would have said yes.” Greg said brokenly.
“I love you Gregory, I always have, but I’m not ready for marriage.” I came up behind him but he moved away and looked at me, quickly wiping his tears.
“Then I think we should just . . . take a break.” He said choked up. “Since you need some time”
“Greg . . .” I said whisper-soft. “No, please.”
“I won’t ask you again. I’m sorry for wasting two years of your life, Islelynn. I’ll not waste anymore of your precious time.” he said softly, not cruelty to his words, and this hurt the most.
“Gregory, please . . . don’t do this.” he smiled sadly and came to me, and kissed me lightly, but before I could kiss him back he pulled back and leaned his forehead on mine, and I cried.
“I’ve always loved you, Isle, always will. Goodbye, my love” he whispered and he was gone.
“Gregory!” I shouted. “Please! I . . .” but I was lost for words, because some part of me knew this was right. But I didn’t want to accept it. I still loved him. But I knew Gregory deserved more.

October 11, 2009, Funeral Home
Islelynn
I looked at the large black coffin in front of me and felt tears come up again. When they found Gregory he was in horrible condition. A large gash on his head. But the thing that hurt me the most was, when they found the ring he was going to give me, in his hand.
Now I held the ring in my hand. Gripping it, wanting, and wishing that he were here instead. But I knew that was impossible, because he can’t come back.
After everyone left I stayed there, the Funeral Home was open till five. So I stayed back. Everyone was gone and so I stood and walked to his coffin. He looked so handsome. I imagined the times when those hands had wrapped around me for a hug, or a kiss, I remembered his lips. Smooth and cool, always loving.
Now he was gone. There was no hint of life now. No laughter in his eyes. They were closed, but I knew they wouldn’t open to tease me, or watch me lovingly. There would be no chocolate brown hair to bury my fingers in.
And this is what hurt the most; to know that he could have been something so much better. To know he was talented but the world would never know that side of him.
So I pulled out his ring. And I looked at him.
“I love you Gregory, I’ll never stop” a tear dropped from my eyes and I wiped them away, I kissed the ring, knowing that it was time to leave Gregory behind, because he’d want that. So I held the ring for a few more moments and then tucked it in his hand.
“Goodbye, my love” I whispered, I looked one more time and finally left him.
For good.
July 17 2010, Orlando, Florida
Devy
It had already been four years now. Four years since I had last seen the girl from Lake Wood Middle School. Four long years, I was so impatient. I had finally gotten her information, finally.
Islelynn Elle Jacks. She lived in Orlando, Florida. She had a sister and a single mom. She was eighteen now, which meant anything could have happened. Anything about her could have changed. She could still be the same girl he had met four years ago, or she could be this totally Devy Bleu fan, who gossiped among her friends that she spent time with Devy Bleu.
But somehow I doubted that. She had never seemed like a girl who would gossip at all. She seemed like a girl who would have abhorred gossip. Especially gossip about him.
But that had been four years ago. That teacher was right. People changed during the years. It fluctuated mostly, but change was what we, human beings, are use to. What was required to persevere.
Now I stand, well I sit, in my limo and watch the house that I was sure Isle lived in. because two times I saw her sitting at her window looking out into the lake and write, I believe, something down.
She may be drawing, I didn’t know. I didn’t know anything about her, only that she disliked me, and again that was four years ago. Four years can do anything to people, especially what happened during those four years, and anything could have happened to Islelynn.
But I knew she was different. She was meant to be different. I never recalled having met a person with a name like hers. She had different written all over her.
Now I walked toward the front door. I was so unsure I was shivering. Shivering! Wouldn’t Boss love to laugh about that? I knew that back in the car, Jimmy, Logan, Jon, and a few others in my band were anxiously watching me. Some guessing this was the wrong house. Others were hoping for a romantic reunion. But if this truly was the girl from four years ago they’d be in for a surprise. I knew I was going to be in for one.
Now I stood directly in front of the door. I knocked twice. I waited.
When she opened the door, I knew. Don’t ask me how, but I knew it was her. “Islelynn Jacks” I breathed, there was no shock, again – surprising, there was no anger, there was only reserved respect, and amusement.
“I’m surprised, Devy Bleu.” She smiled, I thought I saw sadness, but it was held back a little. “I thought you’d never come”
I was up for a new beginning.

Islelynn Jacks and Devy Bleu became fast friends. Devy found out about Mikaela Rossman and her connection to Isle. Isle finally presented to the world her true identity. Islelynn became well known on different parts of the world. Her books still Best-Seller in New York Times.
She made a new book, was already working on it before Devy came to her. It’s - Gone Forever- a book dedicated in Gregory Cooney’s memory. It was a short story about Isle and Greg’s relationship.
Devy encouraged her, and it became his favorite book. It was known as The Book That Touched the World’s Soul.
Islelynn and Devy became best friends a few years later, and got married. They had two children – Gregory and Victoria (Gregory in memory of him and Victoria – a name Gregory wanted for his daughter) Devy Bleu died at the age of eighty three and Islelynn Bleu died at the age of seventy one.
Islelynn Bleu’s books are still popular and are still being written by an anonymous writer – who today is still unidentified.
Sincerely,
Anonymous