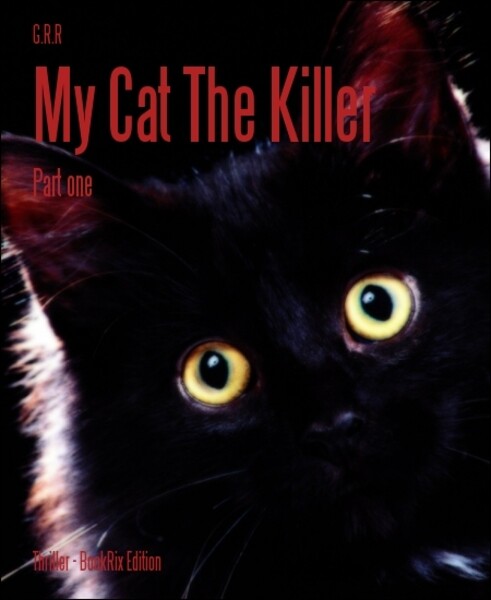 My cat the killer

It seems like only yesterday that damn cat came to our site. Don’t get me wrong, he can be a star when he wants to be, but he has an awful habit as you may have guessed from the title.

The first time I came across this silent bane, I fell into his siren like eyes and youth. The kitten had no collar, no identification and sign of ever having an owner. He tilted its head and the trap has gripped and pierced my body.

I took him home, well not much of a home really. Across the grass, up the metal steps and in through the glass and plastic covered down, into the haven and hell of the Woolacombe caravan. Mother at work and Father asleep, I took a leg from the fridge and gave it the cat after taking a bit myself.

The cat examined the specimen and raised it head and gave an almost smile to give approval. Like cats can’t smile I thought then. The silhouetted beast opened up the leg with incredible ease and took a generous mouthful. I closed the fridge behind me to my astonishment the cat had taken the gift for its own and sprung to life by running around the room. I would have thought that the kitten would got a stitch, but No the little hairball carried out.

The cat left. No word. Just went. Days past, I forgot about the stray demon. The news came around by papers stuck to lampposts that one of the holiday makers had lost their dog and where terribly worried. Day fell behind the sea and I walked the fading streets.

And out the shadows came the lonely white rose with fur of pure black. So much wasted joy on the cat’s reappearance. I greeted the cat with a soft tone but I noticed a stripy, red shoe lying on the creatures back. Then it hit me. A name? A perfect name when this should have been a clue.

Shoes. More days pasted and shoes visited the caravan often. Such joy filled times. Yet bigger bad news came, yet by papers through the door and strips marked "crime scene investigation". The owners of the dog had been savagely killed in the night and others around have mysteriously disappeared also.

Cycling home from school on the Monday was the worse day. We were told that the camp was being closed and it was time for use to move on. It wasn’t that bad, there was a camp down the road, but then that would also mean leaving six years of my life.

The time came for use to move. Yet something still kept me latched to the area. Shoes came to the windowsill, with his eye pulling power, however I was pushed away from him as his back was covered in scarlet.

Then the beast showed itself "unfortunately it has to end like this. Well, I hope you my master will be kind to you. Don’t worry. I’ll be quick. Fast"