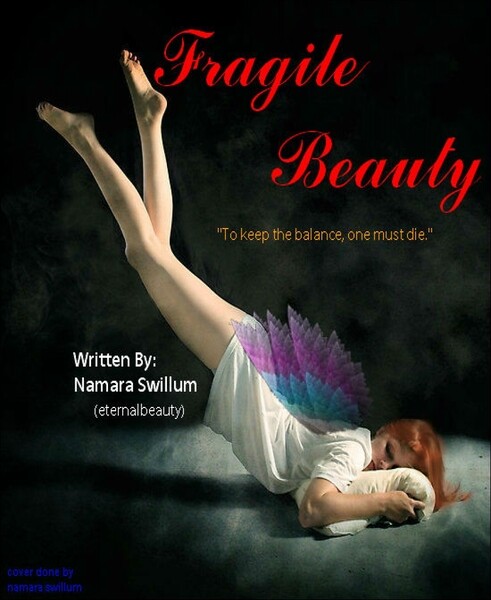 Summary~
A young women is found dead in a lake, with blood pooling around her from a wound in her chest. A mysterious girl is found naked in a forest with strange tatoos on her skin. Are these two happenings connected? With the help of the strange boy that found her, Ari, the girl who was found, is determined to find out if its just a coincidence or something more. When she starts off, she has little idea where she came from, but she knows one thing-almost everyone will be after her, and to survive, she must learn to fight and know who her friends and enemies are.

{{ ALL RIGHTS RESERVED TO ME, THE WRITER }}
{{ THIS BOOK IS ALSO AVAILABLE ON WATTPAD BUT HAS A DIFFERENT COVER }}

Walking down this hallway always make me nervous, and with the Fray walking beside me didn't help, I thought. The Fray and I were walking down a wide hallway in the institute. As usual the hallway looked as if it went on forever, which was partly true, since if you didn't know how to get to the door at the end of the hallway, you would keep on going until you were back where you started. The hallway was lit by torches that lined both sides of the hallway, and were about 2 yards apart. I glanced up at the Fray. He had a aged, handsome, and serious face. His eyes were the color of burning charcoal, and his lips were thin, hinting that he frowned a lot. He saw me staring.

"Stop staring at me women, is there something that fasinating about my face?" said the Fray.

"No sir, theirs nothing facinating at all about your face," I responded, "but I was just about to ask you if we're there yet."

A smiled tugged at the end of his lips. "We are." the Fray stopped so suddenly that I stumbled and had to recover my balance. I looked ahead and waited while the Fray mumble the ancient words of his old culture. All of a suuden a door massive door appeared. It was an old wooden french door that had drawings on it I knew the drawing s had some kind of meaning, but I didn't know what.

"What do the drawings mean?" I asked the Fray.

He turned his head slightly to look at me. "It means 'Thy who enter will learn a secret to keep'. I hear a noise and look up. Two shadow things were opening the door. Behind the doors was a never ending blackness. The Fray started to move forward. I hesitated for a moment, than deciding I didn't want to be alone with the shadow things, I followed the Fray through the door and into the blackness.

All of a sudden the darkness started to fade away, and now I could see where we were. We were in a large room, but it was not lit by torches. It was lit by the glow coming off the rows and rows of these floating glass orbs. But that wasn't the strangest thing. In the orbs were these girls with delicate, beautiful wings sprouting out their backs. Each girl was different from the next, none looked even remotely the same. The only thing they really had in common were their wings, but even those were different. "Aren't they beautiful?" said the Fray in total awe that matched his face. When he noticed that I didn't know what to say, he kept talking. "Pick one to release." the Fray demanded.

I looked around for a moment, making sure I saw all of them before I picked. "That one," I said as I pointed to a winged girl whose hair reminded me of flames.

"Good choice." and before I could scream the Fray took out a knife and stabbed me in the chest. "Sorry," he wispered, "but to keep the balance, you must die."

The Darkness of Death took me away before I had the chance to fight it.

The worst feeling in the world is waking up and not remembering anything.

I woke up to patchy lighting shining in my closed eyes. A twig snapped. "Miss are you ok?" a voice said. Definitely male. When I didn't respond he put somekind warm material on me, and slid his arms under me. I felt the ground under me go away. I moaned. "Miss, sorry if I'm hurting you. Your going to be ok. I'm taking you to the hospital." Before I could respond, I drifted off into unconsciousness.

I slowly open my eyes. Scooting up into a sitting position, I started to take in my surroundings. I was in this very tiny white room, and the walls were make out of this white cloth. I hear two voices- one I recognized as the boy who found me and the other voice I didn't know at all. "-telling you, I don't know who she is. I was taking a walk in the forest and found her." said a angry voice that belonged to the boy who found me.

All was quiet. After a while, I heard foot steps- two of them. The cloth-like-wall was pulled back. Standing were the wall used to be were two men- a boy with sandy blond hair that covered his eyebrows and went slightly below his neck line. His eyes were a piercing greenish blue color. He look about the age of seventeen. The other man was wearing a white lab coat over a white dressy button up shirt, and khakis. His hair was a wild mess-white with gray streaks- like he hadn't combed it that day. His face was aged but kind and he had deep brow eyes that were partly covered by the glasses at the bridge of his nose. They both had a surprised look on their face like they though I was still unconscious. Quickly, they masked their surprised looks.

"Ari, my name is Ari," I spoke without thinking or without doubt. "I am feeling okay," I said slowly, trying to pick the right words.

"That's good. Can you tell us your last name and what you were doing out in the forest naked?" asked Dr. Von curiously.

They saw the horror on my face. "Don't worry, I've seen worse," said the boy quickly and reasurringly. He said the wrong thing. I mentally made a note to bitch slap him later. Thinking I wouldn't notice, Dr. Von elbowed the boy in the side. "Owww," said the boy icily. "what was that for?" Both me and the doctor ignored him.

"Hmmm that's strange...... I even looked to see of you had a bump to the head when Alec brought you in." Dr. Von said thoughtfully. "The only think that was weird was those tattoos on your back. Do you know where those came from?"

So thats his name, I thought. Startled, I looked over my shoulder. Moving the gown's material so that I could see my back without flashing anyone, I saw the tattoos. They were shaped like folded wings- beautiful, and delicate. A spark of memory flashed by, but before I could grab onto it, it flew away. "I have no idea where those came from."

Before either of them could respond, a nurse came in through a door I didn't notice before. "Look what you two fools did! You woke her up with are that bickering you two were doin'!" she than turned to me before the boys could defend themselves. "You need to rest some more honey. I'm goin' to give you somethin' to help you sleep." she walked over to me and injected me with a needle. I instantly felt sleepy.

I fell asleep listening to the nurse shooing Dr. Von and Alec out of the room.


I woke up to someone nudging my arm. Reflexively, I striked out. "Oww," said a familiar voice in pain. Alec. I open my eyes and see Alec peering down at me with his had covering his nose.

"Sorry," I said icily. "If you want, I could hit you somewhere else to make you forget about your nose." I smiled sweetly.

He didn't respond, but I swear I saw him roll his eyes. He threw a plastic bag at me. I caught it, looked inside, and saw clothes there. He noticed I was confused. "Those clothes are for you, the nurse picked them out for you. Go get dress in the bathroom, I'm be waiting outside the room," and with that, he got up and left.

I got up and went through the "hole" in the white cloth wall. To my surprised, there was a whole different room outside my tiny room. I walked into the bathroom, turned on the lights, and closed the door behind me. I stripped down and looked at myself in the mirror. It was than that I noticed the odd vine-like tattoos on both of my upper arms. Turning around, I looked at my back using the mirror. I gasped. The tattoo was even more stunning than I thought it was. Getting a hold of myself, I turned around and took the clothes out of the bag. The bra was plain, but thankfully clean. I put it on. Bending down, I slid on a new pair of clean white underwear. I took out the black, long sleeved shirt and pulled it over my head. It was loosely fitted, but I was fine with that. I than pull on the skinny jeans quickly. I slid my feet into a comfortable pair of flats. I was done. Almost. I looked at myself in the mirror. My hair was a wreck. As I ran my hands through my red hair I winced. I had pulled out a big knot. Finally, happy that I got enough knots out, I headed through the room and into the bright hallway.

I found Alec leaning against the wall opposit of me with his worn leather jacket over his arm, and holding a hoodie out to me. "Here, its cool outside, so you'll need this," he said with no expression. I walked over, took the hoodie out of his hand and put it on. Alec watched me as I did this. Standing up strait, he put on his jacket. "Let's roll," and with that, we left the hospital.