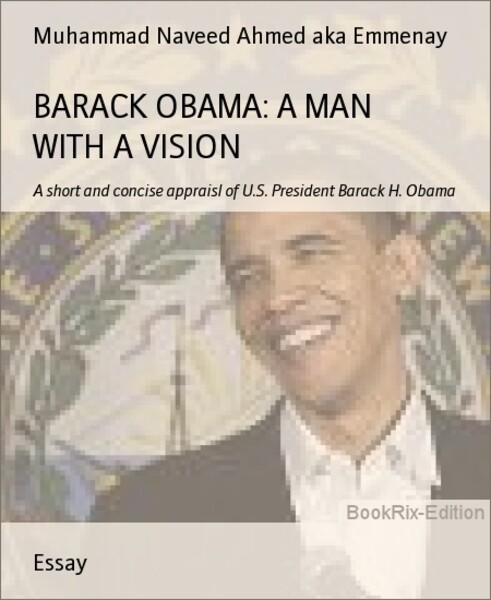 AMERICA’S BARACK HUSSEIN OBAMA: A MAN WITH A VISION.

U.S. President Barack Hussein Obama is the best thing, God-willing, that can happen to this world oF ours today. He is the first African-American president who believes in what he says. A man of his word, President Obama's vision for a peaceful world is undeniable. He belongs to a family which has close links with Islam and to top that he is a black African.

The 44th president of the United States of America has noble aims and achievable goals and is striving hard to live up to the promises he made to his people (the Americans) in particular and also to the world at large -- that he will do all within his means and resources, as well as his God-gifted talents, abilities, political acumen and innate intelligence to make the world a better place to live and prosper, for one and all, regardless of religion, race, caste, colour, creed or region.

And so far Obama has done the best he could -- despite stiff opposition from his political rivals and critics at home and abroad-- to fulfil his promises made during his presidential poll campaign in 2008.

Moreover, Obama, as the president of the worlds's only major superpower, has not resorted to insane and unwise waging of wars on the innocent people of Iraq, Afghanistan and Iran. He has always advocated dialogue and diplomacy as the main means of resolving differences and disputes between warring countries.

The far-thinking African-American president has also stopped the innocent U.S. army raids on civilian Iraqis and their business outlets, places of worship, schools, offices and homes not to mention his hectic efforts, day in and day out to end the U.S. military campaign in Afghanistan...by stressing that Afghanis i.e. innocent civilians -- men, women and children -- must not be made scapegoats for the political crimes and follies commited by the tribal leaders that have been dominating the politico-cultural and military scenario of Afghanistan after the Soviets left the country.

Obama also believes and has put into effective action his beliefs by deciding to recall the majority of the U.S. Army from Iraq and Afghanistan and slowly hand over the reigns of government to the democratically elected people's representatives of these war-ravaged countries – leading political party candicates which will emerge in the form of one majority party in the coming days.

President Obama's government has also given a lot of financial military and economic aid to Pakistan so that it does not slide into regression and backwardness due to the fanatic Talibanisation wave that has wreaked havoc in the land and made day to day normal living and survival extremely difficult for the people in the terrorism-affected regions, specially in Swat and Malakand, Peshawar, Mansehra, Pabbi, Nowshera in the country’s North Western Frontier Province and even in South Waziristan.

Obama has also coordinated and handled a fresh wave of unrest, insurgency and rising terrorism in Quetta and other parts of interior Sindh province as well as in the tribally dominated parts of Balochistan.

Obama is on a dialogue path with Iran and its leaders over the Iranians' controversial nuclear programme. He does not want war but peace and amity with the once grand Persian empire's descendants.

In the Middle East too, Obama is doing his level best to resolve the Israel-Palestinian dispute and escalation of tensions amicably, regarding widespread Israeli settlements in the occupied territory of Palestine and the explotiation and killing of innocent civilians on both sides of the Gaza Strip and the Jordan River. In this regard, Obama has not ignored the very fundamental and key role of Egypt, Jordan, Saudi Arabia, Syria and their allies while honestly and sincerely working very hard to make a success of what at present appears to be a sort of an impossible mission in this historically strife-ridden part of the Mideast.

At home in America, this young and charismatic president is also involved in eliminating economic recession and providing jobs to the jobless and providing more opportunities and work avenues for the talented youth of the land. Not just that. He is reviewing all the faulty policies of the Bush administration and seeking remedial measures to solve the many grim woes threatening the economy and well-being of his land and his fellowmen.

I would wind up my brief yet honest and precise appraisal of Obama by stressing that he is a plain, blunt, honest and straightforward man, who is sincere in what he believes and says what he deduces as right and proper, unlike his predecessor, the hypocritical former President George Bush and his main election rival Senator Edward McCain.

History, if iit judges impartially, will prove and praise this first African-American President of the United States of America as a fair, kind, morally strong and wise leader and give him his due place along with great former presidents like George Washington, Abraham Lincoln, Franklin Roosevelt and John F. Kennedy. May God Almighty be with him in his good intentions and struggle, aimed at ending the seriously threatening ills hovering over the modern-day world of ours...Aameen (Amen).

Texte: ALL RIGHTS RESERVED BY THE AUTHOR MUHAMMAD NAVEED AHMED (EMMENAY). NO PART OF THIS BOOK CAN BE COPIED, TRANSLATED, QUOTED OR REPRODUCED IN ANY FORM IN PRINT OR ELECTRONIC FORMS INCLUDING COMPUTER TECHNOLOGY WITHOUT THE SOLE SIGNED PERMISSION AND APPROVAL OF THE AUTHOR. COPYRIGHT NOVEMBER 5, 2009.
Tag der Veröffentlichung: 04.11.2009

Widmung:
To all those who admire Obama not only as the president of the U.S.A., but also as a man who is honest, upright, truthful and above all a God-fearing human being and a visionary.