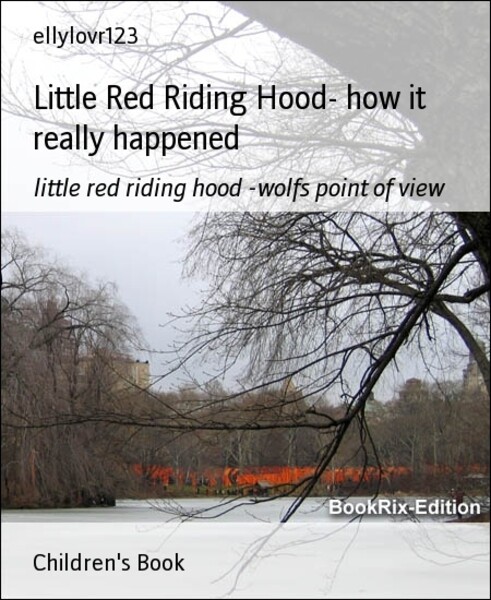 Little Red Riding Hood (from the real piont of view)


Once upon a time there was a wolf, and that wolf is me. I got caught in the biggest pickle of my life. It all started with this little girl and her grandmother. Man! One thing i learned on this event was that even if people are old doesn't mean that they can't scream as loud as a little girl. So I was walking through the village one day and noticed that there was a pig loose and running around in front of this house. Being the kind wolf that I am, I did not want the person living at this house to not know that their pig was loose. So I went up to the door and rang the door bell. An old lady answered the door. Before I could even get out a word, this old woman began screaming at the top of her lungs. Of course, this drew everyone's attention over to this old lady's house. So I gently shoved the old lady into her house and entered the house after her. Once we were in the house I thought that I would be able to explain myself to her, but no! This old lady just kept yelling and yelling. I had never heard such shrieking in my entire life. I was so scared that someone was going to come over and get me, thinking that I was hurting this old lady. So acting out of fright I ate the old lady. I didn't know what else to do. I wasn't hungry at all, but I ate her for the sake of my own life.
After I had heard this old lady yell so loud, I had a headache. So I decided that I would take a little nap. I was off in dream world when all of a sudden I heard a knock on the door. Being frightened of what to do I did the first thing that came to my mind. I grabbed the old woman's clothes and stuck them on and then jumped back into bed. I thought that I could trick whoever was at the door that I was this old woman. Now that I was prepared, I told the person to come in. To my surprise the guest was just a little girl. She said, "Hello, grandmother. I have brought you some custard." I told the little girl thank you and then told her to go away. However, like most little children this little girl started asking me questions. She went on and on with things like "what big eyes you have" and "what big ears you have." I kept trying to think of responses, but I was running out of things to say. Just like the old woman, the little girl would not quit talking. Finally the little girl said, "What big teeth you have." Not knowing how to respond to the little girl and not wanting a yelling session to begin again, I found that the easiest thing to do was to eat the little girl. I felt terrible, but I think there was no other way.
After all this mess, my terrible happening turned into a story by the village folk. Except these people told the story in a way that made me into an evil villain. This story has ruined my life. I can't even show my face in the village anymore and it ruined my weekly poker game. So I am setting the story straight. I was the victim in all of this mess.