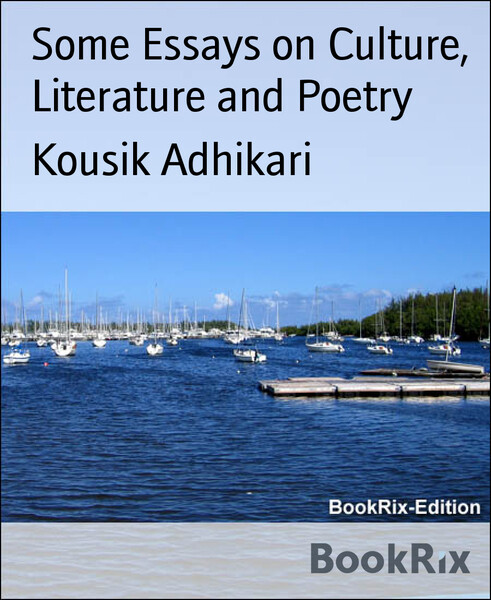 Some Essays is an effort, consisting various subjects, but the focus is literature. The article Poetry of Conrad Aiken: A Study is a study on one of greatest American poets, though, perhaps he was not a very popular poet in the sense of the term. The essay Religion and Inherent Dichotomy of India as an Asian Superpower: A Critical Study into the Space between Culture, Ethnicity, Religion and Identity in Special Reference to Bankimchandra’s Anandamath is an effort to see Bankimchandra’s Anandamath in the light of Anderson’s theory of nation. The Poetic World of Susan Howe: A Study is a critical appreciation of Susan Howe, born 1937 who is undoubtedly one of the greatest poets and unique voices in American Poetry, who is also a scholar, critic, philosopher and a poet who is one of the most difficult and least appreciated. Love and Desire: A Study of Arab Bedouin Women Poetry is a study on mediaeval Arab women poetry or nabati poetry. The last essay is on Harper Lee’s classic To Kill a Mockingbird, a classic in the group of Mark Twain or Faulkner

The Poetry of Conrad Aiken: A Study

Conrad Aiken (1889-1973) reserves a specific niche in the American poetry. Though, perhaps he was not a very popular poet in the sense of the term, he was awarded with several prestigious awards and indeed was much distinguished poet than many of his contemporaries like John Peale Bishop or Archibald Macleish. This was indeed a very peculiar characteristic of his poetry. Different commentators are of the opinion that Aiken has never tried to make himself popularize by adjusting with the current literary trends. Further several childhood incidents influenced his poetry, its themes, and styles like the early childhood tragedy where his father had shot his mother and himself after an ensuing quarrel. Aiken's deeper interest and portrayal of psychology stem from this incident. He himself admits that his short story like Silent Snow, Secret Snow which is a psychological presentation of a disturbed boy was itself a 'projection of his own inclination to insanity'. In this connection Richard Hauer Costa very significantly comments that Aiken was always an 'I' writer, suggesting and presenting the deep psychological workings of self in his work. Aiken can be and should be read as poetry rather than separate individual poems which is 'cognitive music'. In an interview taken by Robert Hunter Wilbur in the year of 1963 and published in Paris Review, Aiken frankly admits that from his boyhood, he had resolved to be a poet and was deeply influenced by a thorough reading of continental poetry especially Italian, Spanish and French poetry. Talking about the influence of Whitman, he there further admits ,"...Whitman had a profound influence on me. That was during my sophomore year when I came down with a bad attack of whitmanitis."

Santayana's vision of philosophy in poetry also tremendously influenced Aiken's poetic career that fixed his idea of what poetry should ultimately be. The most unfallible and evident characteristic of Aiken is perhaps that he cannot be truly compared with any oher poets. He is not like Frost, not implying the opposite which is Frost's basic proposal for a poem and yet there is a deep unmistakable elequence in his best poetry tthat cannot get unnoticed, reminding the readers the romantic force of both Emerson and Whitman. Aiken's Earth Triumphant (1914), Turns and Movies (1916), The Jig of Forslin: A Symphony (1916), Nocturne of Remembered Spring (1917) were the poetic attempt of a mind, deeply immersed into Freudian philosophy. A lot of his poetry is philosophical meditation, sometimes enacted through characters, sometimes more purely ruminative, all the while tracking psychological experience in ways few poets ever have. What distinguishes Aiken from his contemporaries, the early Moderns and the Lost Generation, is his innate and cultivated sense of the musical line, and his virtuosity in his technical achievements attaining to musicality in poetry. Compared to the Imagists and other poets of the Pound/Eliot lineage, Aiken can seem almost overwhelmingly sensuous, lyrical (in the ancient sense of the word), and hallucinatory. Aiken's imagery is often so rich and dense, full of fragrance and sensual turn of phrase, that the reader is caught up with the sheer beauty and only later realizes that the poem is vatic and archetypal as well as sensual. This is the opposite of Eliot's cerebral astringency; it is more naturally allied to Lorca and Lorca's poetic descendants in Latin America; indeed, as a poet-reviewer Aiken understood Lorca more deeply than most. Aiken knew, for example, that Lorca was never actually a Surrealist, but, more accurately stated, was rooted in that chthonic level of consciousness out of which Surrealism also arose.

Some of Aiken's stories and longer poems delve into states of mind that verge on the shamanic, illuminating extreme experiences and altered states of consciousness, just as his poetic style verged on magic realism long before that term was ever applied to literature. Aiken was never quite sold on Pound's program; in this way I suppose he was an old-fashioned gentlemanly poet, as he has been accused of being; yet after reading his Collected Criticism or his Collected Short Stories, you realize that in fact Aiken was that more important rare bird: the truly independent mind. In some ways he remains ahead of our times. Superficially his poetry can seem merely lyrical and conventional, but the states of mind the poems explore can be disturbing, illuminating, ecstatic, terrifying, sometimes all at once. One section of The Jig of Forslin takes the dissolute protagonist through an experience of psychic vampirism, akin to and possibly inspired by Keats' Lamia. It's a disturbing read; it is also a sideways homage to, and critique of Keats.

With Aiken it is sometimes as if the radical and experimental vision is cloaked within the apparently ordinary turn of phrase; the monsters of the id lurking behind the mask of comforting normality; there is often a violence just beneath the surface; sometimes it is the violence of emotional experience, sometimes it is more properly an existential crisis of meaning—which links Aiken as a writer to his peers amongst the early Moderns in terms of topic and question. Some of Aiken's best writing is about the gradual revelation of—or descent into—madness, disassociation, complex psychological catharsis, and man's search