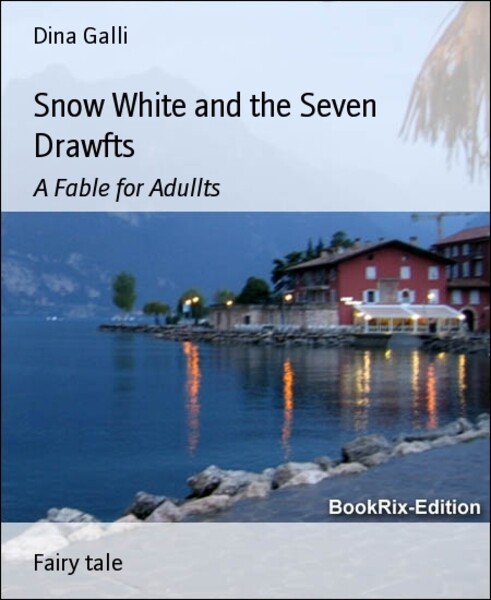 some where out their in the middle of know where lives a little girl named Snow, and she has a really great life, just her and her dad, her mom left home when Snow was born to join the circus. Snow never held a grudge because she loves her mom so much that Snow feels that if her mom wants to be in the circus more then be in her family, that is OK, because she wants her mom to be happy most of all. Mr. White loved being Snow dad, so he will never leave home or anything like that, so at least she has one parent who is willing to take good care of her, that is better then nothing.

Snow has Seven dwrafts that live in her home, which is a castle, Their names are Dasher, and Dancer, Prancer, and Vixen, why their is Comet and Cupid and Donner and Blitzen and of course the most favorite draft of all is Rudolf the red nose dwraft.

Snow has a happy life her and her Daddie o and her seven dwarfs that love her way to much. Her Dad hired the seven little fellas to be Snow Nannies, to watch out for her, and to keep her safe from criminals and bad people. Because Mr. White knows the truth of the matter, that he is a working man, and so he can not keep as good of an eye out for his adorable daughter, not the way he would like to. so what else could he do, he put an ad on craigs list for a nanny, and they were the only ones that answered, so it had to be Gods will he though? And Mr. White is not one to mess with the will of God, so he hired them on the spot, and they have been in Snows life since she was two days old.

Now Snow is fourteen and it has been a long time since her pops had a date with a women. So Snow and the dwrafts saw his loneliness
and felt bad, put an add on a dateing web site called Catch me and keep me forever dateing site. With a name like that they new that they would find someone mighty special for Snows dad.

So after breakfast Snow and her nannies told Mr. White the good news. Dad guess what? What my precious little pearl? Guess, Mr. white replies to that and sais, no, I will not guess, and he laughs his deep laugh, I am no good at guessing so just spit it out child and tell your old man what is it you want to say.


Well Dad, I put an ad on a dating site for you to find you a girl

friend, when Snow sais that she really emphasizes the word girl

. and I think I found you a winner. She smiles a great big coolaid smile, and lets out a small sigh.

The dad is all excited really, you found me a women, but how do you know she will like me?

I don't dad, but you can meet her and see.

you have to contact her on the dating site, and ask her on a date.

I cant do that, he sais very serious

but why Snow asks,

well how did you ever go out with mom then?

She asked me out he replies.

oh thinks Snow, but dad just look at her pics, and see if you like her.

No he demands, I will not look at her, and he storms off to his room to pout like a little girl.


But Snow knew that this women would be just perfect for her dad, she had to be, her profile said she was kind, and sweet, loved puppies, and God. No thought Snow, she is not getting away. So Snow marched off to her computer in the library part of the enchanted castle and logged on to her computer, yes she did,

and then she went on to that dating site Catch me and keep me forever dating site and she pretended to be her good old dad. And she asked that nice decent women out on a date for her cowardly dad. She had to do it, because it was for his own good. He needed to go on a date with a women. come on,

Snows mom has been married and divorced two more times since she divorced Snows dad, and Mr. White has not even kissed a girl in over fourteen years. Then Snow thought about those trips to Vegas, and hoped she was right about that, and he didn't do one of those things that you do in Vegas that stays in Vegas kind of stuff, like prostitutes. No not my dad, so he needed his daughter to help him out just a bit. and what is a daughter for, if not to fix up her dad with a really awesome woman? So she did what she had to do is all. and the lady said yes.


That was stupid quick Snow thought, but yai, my dad is going on a date. Can't wait to trick him into meeting his new girl friend. Snow white was also secretly wanting a new mom, not to replace her old one, because even though her mom was not dead really, Snow White likes to pretend she is, not because she hates her, just sounds better then the truth, and she would like a mom figure around to be friends with, and do daughter mom stuff with. Some one who can answerer some of lifes touch questions, that a girl feels better discussing with a women, then her dad.

And her dad is really a good guy, and Snow would like to see him with some one who will love him and take good care of him the way he deserves. Snow hates seeing him alone for so long. It’s been to long for my dad, he deserves her, this new relationship just feels good. I know she is going to be good for my pops. Can’t wait for their wedding day. Snow knows she is getting just a little ahead of her self, but she giggles, I know she is going to love my dad. She won’t be able to resist him.