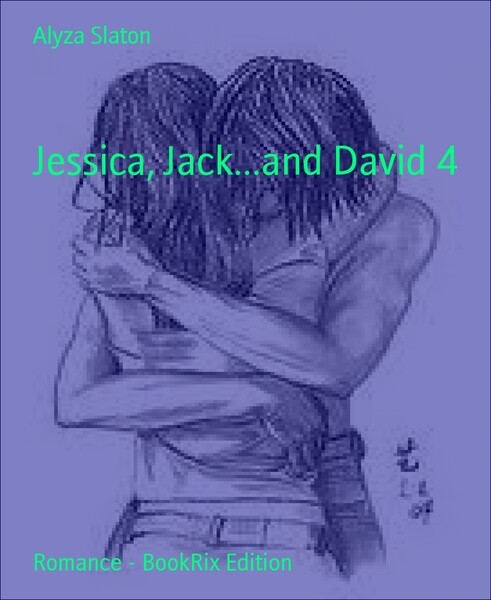 When the rang signaling the end of end I was relieved. Jack was staring at me the whole time and

David was glaring at him.

Could my life get anymore complicated?

David walked over to me still glaring at Jack.

His eyes snapped to me, "What?"

"Just ignore him." I said packing my things

"How can I just ignore him when he's staring at you?" He asked angrily

"You're mad at me?" I asked crossing my arms

"Yeah. I am. I'm mad because you obviously see him staring at you and you don't do anything about it." He said, his eyes blazing

"What the hell do you want me to do David?" I demanded

"Stop being a slut and kissing other guys." He said walking away

Tears pricked my eyes. I am a slut. I went out with
Jack then the next day I'm David's girlfriend.

"Are you okay?" Asked an all too familiar voice

"Yeah. I'm fine." I said throwing my bag over my shoulder

"You're not a slut." Jack said staring at my face

"Yeah I am." I said looking at the ground

His finger lifted my chin up, "You're not."

I walked out of the school doors and started walking home.

Tears flowed down my face. Why would he call me that?
Maybe because I am.

When I got home no one was there and I was thankful for that. I went up stairs and to my room. I threw my bag on the floor and sat on the ground, holding my head in my hands.

When I was little there was only one person that could make me feel happy. He was amazing. Right now he would be saying something funny and it would cheer me up.

That person was my brother Tyler. He was the best big brother in the world. He would always play with me.

Even though he was 18, he always acted like a kid.

When his friends would want to go out he'd cancel for me. He'd do anything for me.


That was the problem though. He would do anything.

Even if it meant him dying.

Well, that's exactly what happened. I was 6 or 7 at the time, Tyler and I were playing tag. I ran out into the road and I didn't see the car that was coming.

Tyler saw it though. He ran out into the street and pushed me away. He could save himself in time. The car was going to fast and the driver could stop.

The car ran into Tyler full speed. It was the worst day of my life. And to make it worst, it was his birthday. He was suppose to be out partying with his friend but he was here playing tag with me.

The driver stopped at the end of the road and got out running over to Tyler.

Crying, I crawled over to his bloody body.

"Jessie, I love you, you know that right?" He whispered

My bottom lip quivered as I answered, "Yeah."

"Good because you're the best little sister in the world." He said smiling slightly

The driver finally came and he was frantically talking on the phone.

"I love you Jessie and it's not your fault." Tyler whispered as his eyes started to close

I slumped against him limp form and cried. The paramedics had to pull me off of him.

"Tyler!" I cried out as they put his body in the ambulance and drove again leaving me with a cop

"Shhh, it's going to be alright." The cop whispered rubbing my back

"My big brother is gone. Nothings going to be alright." I said to him

The cop drove me to the hospital and said my mom and dad would be there.

When I got there my mom and dad were sitting in the chairs crying. When they saw me they ran over to me and cried more.

Tyler was pronounced Dead on Arrival.

I was the cause of his death. If I hadn't asked him to stay with me he would still be alive and well.

If he would have went and partied with his friends instead of playing tag with me he would be here.

If I wasn't so selfish he would be here.

It's my fault he's dead. I have to live with the guilt of my brother's death for the rest of my life.

Tyler wasn't someone you could forget easily.

At his funeral basically his whole school was there.
That's how amazing he was. He was friends with everyone. Kids and teachers were crying.

Tyler told me it wasn't my fault right before he died. But it is my fault I would have rather died other than him.

The only way I could say sorry was to a tomb stone.

Some may consider that sorry enough but it's not because he still can't say he forgives me. As many times as I say sorry I'll never be fully forgiven.

I stood up and went over to my closet. I picked up the box that had all of Tyler's pictures in them, then I walked over to my bed and plopped down on it.

Then the door bell rang. I groaned and got up.

I walked down the stairs slowly. When I got there I opened it and came face to face with Jack.

"I wanted to see if you were alright." He said quietly

"I'm fine." I said looking away

"We're you crying?" He asked

"You're not a slut." He said angrily

I looked up, "I wasn't crying about that. I'm over it. I already know I am so..." I trailed off shrugging

"What were you crying about?" He asked softly

"Nothing." I said quickly

I nodded and stepped aside to let him in. I shut the door behind him and he started walking into the living room. He plopped down on the couch.

"Oh, sure. Make yourself comfortable." I said sarcastically as I sat down on the other side if the couch

"Thanks. So what were you crying about?" He asked

"Nothing." I said shaking my head, looking anywhere but him

"Why can't you just tell me?" He asked as he scooted closer to me

He grabbed my hands in one of his and pulled my face to look at him.

"It is a big deal if you cried over it." He said looking into my eyes

I looked away, "Look at me." He demanded

I looked back at him.

"Just tell me." He said softly

"I was just thinking about my brother." I said quietly

I looked down and then suddenly I was in his lap being cradled like a baby.

The tears poured from my eyes as I cried into his chest. Probably ruining his shirt.

"It's okay baby girl. It's okay." He whispered soothingly

An hour later I stopped crying and looked up at him, he didn't look mad or annoyed.

"Sorry." I said thickly from crying

He shook his head, "Nothing to be sorry for."

"Your shirt for one." I said with a small chuckle

"There's always more where this one came from." He said smiling

"I'd have rather been here with you." He whispered

I smiled up at him and got off his lap but he pulled me back on it.

"It wasn't anyone's fault but mine. And David's true colors showed today." I said

I laughed and shook my head.