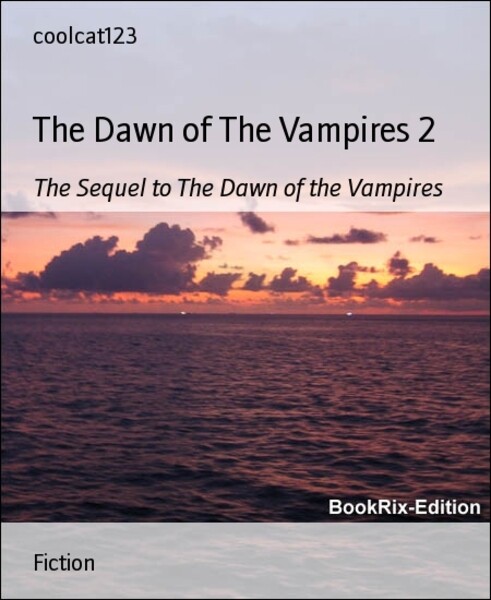 As the man pondered what had just happend, Victoria did the same. The man's eyes were just so tempting but she had never kissed anyone before. And she was 450 years old! She now knew what had happened. She had just reacted to how she had been feeling. She had been feeling very loving despite what had happened yesterday and here she was. Standing next to the attractive human male she had tried to kill 2 times already. She just couldnt do it. She gave the man an evil eye and dashed off. When she looked back, the man,clearly astounded,was still standing there with a melt away look in his eye. That both irratated and annoyed her. "HEY!",she screamed,"YOUR ABLE TO MOVE YOU KNOW!". Whatever. She turned around and headed back to the hideout. It scanned her hand again and she headed in. She passed all the others finishing their snack.Blood type A. She then passed the lead vampire's chambers and entered the subject's chambers. She found her room and entered. There was another vampire in her room. before she could see who it was he was out the window and gone. This incident creeped her out a little bit but she was a vampire. If that vampire came back she could defend herself. Besides, she always kept a gun under her bed,along with some secrets written on paper. She reached for them. The entire box she kept them in was gone!

Whoever this person was, they wanted all her secrets!And weapons!

As she woke the next morning, Veronica's clouded memory started to clear. She remembered what had happened the previous night. She decided to hunt in an entirely different area! That should do it! She got up and dressed. Then she watched out the window as she always did in the morning. She sat there for an hour not realising the time pass. She,after all,was thinking about and longing to be human again. She thought aboout how she could never have a human child. If she had a child,it would grow up in this terrible place. Grow up in this terrible life. She could never do that to an innocent child.

She put that thought out of her mind. She looked at the clock. She would be late for the Vamp Meeting! She rushed out of her room, her shoes in hand. As she stepped into the conference room, a particular vampire that just happened to fancy her,snickered. She knew he had been watching her and taking notes of what she was doing around the humans. He knew she had kissed the human,he knew she had triend to kill him twice and that she had been coming back late. She hoped he wouldn't spill the beans,after all, he was the one who called this meeting.

The meeting continued. He never spilled anything about her directly but he suggested the 'younger' vampires should be watched during feedings. I was super hungry. Especially when he mentioned feedings. I hadn't eatn in about 3 days.

That night as Veronica was walking to a different area entirely, the vamp that took a fancy to her was walking next to her. He had volunteered to look over me. Of course. Hos name was Vladmire. They were talking. About what she had been doing the last few nights. Of course. "WHY DID YOU KISS HIM? YOU THATS A DIRECT EXECUTION! ARE U CRAZY?!", he said.
"No im not crazy! i dont know what came over me. It was just an urge i couldnt ignore. And im gonna make sure it doesnt happen by staying away from that entire area.", she replied calmly.
"Good plan."
"Just please dont tell anyone, Vladmire."
"Under 1 condition."
"Anything."
"You marry me."
"What?!", she shouted so loud that everyone from a mile could hear.
"You said anything. And even if you didnt,i would tell if you didnt marry me. Well, i will leave you to think about it.", he said as he skimpered off.

What?! She didn't want to marry anyone! She was only 16 when she was changed! Plus, how would she ever afford a wedding. She decided it was what she had to do to keep her secret. She also decided not to think about it anymore.

When she came out of th eworld of thinking,she realized she was there,but with no Vladmire in sight. Good. I can hunt in peace she thought. It was a dark, peaceful night. But not for long for one innocent victim. The air settled cooly on everything. The houses,buisnesses, even the people. As she waited for someone to step outside into the night, she was again thinking. Soon it would be winter and humans would stay inside because of the cold. Soon she would buy a new gun because since people stayed inside in the winter,it was easier just to brake in,shoot the person, an then drink their blood.Just as she was thinking about who her little, bedroom thief was, she heard a loud,rustle from around the corner.

A human! She quietly snuk around the corner and took a peek. He was tall but fat. Yummmmmmmmmm.............. this kind's blood was usually fatty and there was a lot of it. She rushed to him, knocked him over easy, and looked at the look of terror in his eyes.

"Who are you?!", he demanded
"Your worse nightmare!", Veronica said.Those were the last words he ever heard.o flesh and felt the warmth of the blood. I felt his pulse slow. I always suppose they dont feel a whole lot but im not 100% sure. I honestly didnt care. By the time i finished, it was late and reputation was on the line so i rushed back,scanned my hand, and entered. The entire council was there waiting! For me!