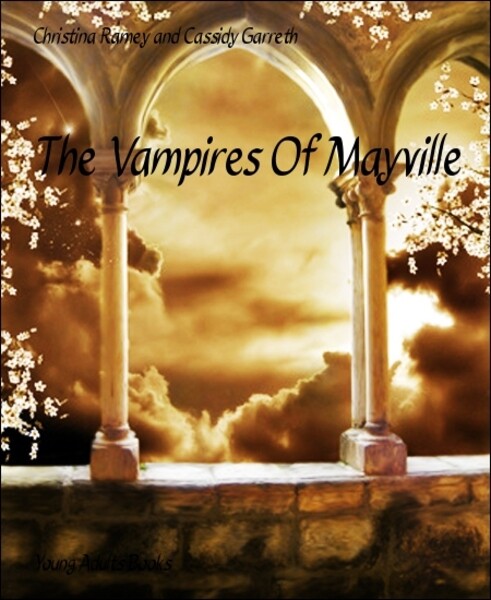 I looked out my window and sighed. He was so good looking. To bad we were just friends. I grabbed my purse and headed out the door. When he saw me he smiled.
I stood and looked at him for a mintue. He was leaning against his black convertable that had the top down. He had on blue plaid shorts and a white t-shirt that said 'I'm with the band.' His jet black hair was messy and he had on his favorite pair of sunglases; black wrap around Ray Bans.
I looked down at his shoes and giggled. He had on blue converse that were dirty and his right one was untied.
He looked down at them and smiled sheepishly at me. Then he bent down and tied his shoe.
"Hey there," he said in a voice that was as sweet as honey and mysterios.
"Hey," I said with a smile.
I climed into his car and wondered what we were going to do that night. When you were with him you never knew what to expect.
I looked over at him and grinned. I thought about why I was so crazy about him. He was so different from all of the other boys. He was mysterious and so so geogous. If you looked at him you would think he was one of those "Bad Boys," but he wasn't.
"So Chris," he's name tasted so sweet as it rolled off my tounge, "What are we doing tonight?"
"Well, Jenny, I was thinking about takeing you to a nice little resturant on the edge of town."
I blushed, "You're takeing me to dinner?"
"Yeah that was the plan."
"Cool."


The next day I woke up in my bed. I had no idea what had happened the night before. The only thing I remembered was Chris takeing me to a restrurant. The rest of the night was a blur. I had no idea what else happened.
I got up and looked into the mirror. I didn't look to bad. Which was kind of weird since when I usually get up my hair was messy. It didn't take me long th choice what to wear. I'd taken to wearing plaid because Chris liked plaid.
So I put on a pink plaid skirt with white leggings and a pink t-shirt.
When I looked out my window Chris was waiting for me in his convertable. He saw me in the window and waved. I smiled and mouthed the words 'hold on.' He understood. He always understood.
I looked in the mirror again before running downstairs. I ran all the way outside and into Chris's arms. He caught me and held me tight.
"I had fun last night," I said looking up at him.
"Yeah, me too," he said holding me at arms length.
When he was done looking at my outfit he smiled.
"You look so cute in plaid."
"Thanks."
"Well..., we better get to school," Chris said absentmindly.
"Um, Chris, we graduated last week."
Chris looked at me and laughed, "Oh, yeah, right. I've been busy."
"You forgot we graduated."
"No, seriously, I've been so busy-"
"That you forgot," I finished for him.
It was so like Chris to forget we didn;t have school. I always wondered what Chris did when he wasn't with me, but he wouldn't tell me. He didn't have a girlfriend or any friends, but that was because he never talked to anybody. But I still wondered. I wondered what it was he could't tell me.
"Whjy are you so busy, Chris?"
"My job. You wanna go to my house?"
"Yeah."
Chris's house was amazeing. It looked plain on the outside but on the inside it was awsome. It was cool because he lived by himself. His parnets didn't live with him.
He had painted all the walls dark blue. He always had the curtains drawn in every room. He liked it dark.
My favorite room was his bedroom. He had painted the walls a very dark blue. It was so dark it was almost black.
"Wow." I said, my jaw dropping.
"You like it?" Chris asked, behind me. I nodded.
"It's different. Last time I was here your room was light blue."
"Yeah," he said sitting down on his bed, "I painted it."
"I can see that," I said sitting down beside him, "I like it better this way ."
"Really?" he asked. I nodded again. He smioled one of my favorite smiles of his.
I blushed not knowing what to say. I mean his smile took my breath away.
If only he would kiss me. Then maybe I would know what to say. I had never felt this way about any guy.
I wanted to move closer to him. I wanted him to wrap his long, tan, muschiler arms around me and hold me. I wanted a lot of things.
I thought about all of this as I stared at him. But a weird thing started to happen when I was staring at him. I started to get sleepy. The next thing I knew I blacked out.


I woke up in Chris's bed. Under his blankets. With no idea what had happened. I sat up quickly and
looked around.
Chris wasn't in his room and my colthes were still on. I got up and walked downstairs.
"Chris," I said looking in the living room."
"In the kitchen!" he yelled.
As I walked into the doorway of the kitchen I smeeled some freashly cooked bacon and pancakes.
Chris sat the plate of food onto the table.
"Dig in." He grinned. I couldn't help but giggle. Chris held the chair out for me and I sat. The bacon was so delitous and extra chewy. The pancakes were twice as good. When I got done I looked at Chris.
"Where'd you learn to cook like this?"
Chris looked at me accuseingly, "You're insulting my intellagince."
"Sorry, I didn't me to."
"I'm joking," Chris said laughing, "I learned off of the food channel."
"Wow, I didn't think you wached T.V."
"Well I do."
I giggled. He could make anything sound funny.
"So, what time is it?"
"Two-thirty."
"In the moring!?"
"Yeah."
"Oh shit! I need to call my mom. She's probably worried to death about me."
"Relax, I already called your mom and told her you fell a sleep."
"Thank you so much."
"Your welcome."
I looked into his eyes. I was taken back by the look of love that was on his face. I only saw that look when he was talking about something he really loved. I never saw him look at me like that.
I slowly got up from the table and walked over to him. His eyes followed me every step. When I was in front of him I reached for his hand.
Then he suprised me by pulling me closer. He slowly wrapped one of his arms aroond my waist. He used the other to brush my hair out of the way and to pull my face foreward.
When our lips met sparks flew. The way he kissed me was unlike any other way I'd been kissed. It was so sweet.
The way he held me and the way our lips shaped around each other was prefect.
But all to soon he pulled away. Breathing hard he pushed me away gentely.
"We can't do this."
"Yes we can. There's no law that says we can't."
Chris looked at me and grinned.
"I'm not good for you. You desvere better."

Widmung:
To all of our friends and everyone who reads this book.