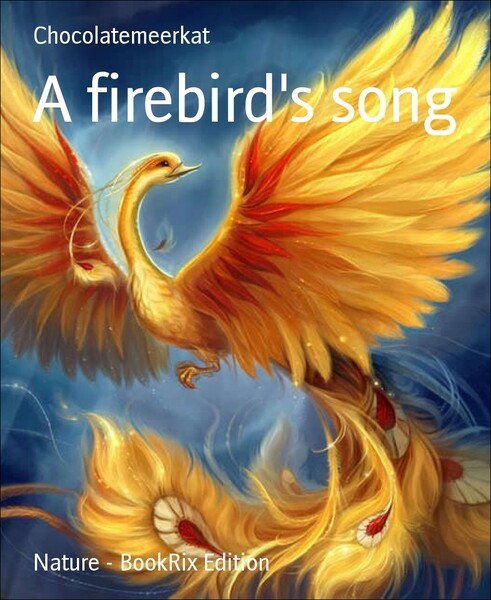 Greetings, all readers. I'm Holly, and I am 13 years old. I live in Bromely and go to Bromely high school. I live with my mum, my dad, my brother, my sister and my dog Bruno. I did used to own a wild bird called Hero.
Hero was a firebird, a beautiful bird that were common to Bromely. I love to watch them leave their nests at springtime as they swoop across the pink, dawn sky. It's an amazing, beautiful and rare sight, only happens once a year at Bromely. You have to be outside my house at sunrise. But in my whole street, I seem to be the only one intrested.
At school, we learn about firebirds during spring. No matter what year you were, you would learn about firebirds. I longed for these lessons, as we read poems and stories and painted pictures. We sang about them too. I'm trying not to boast, but everyone knows I am the best singer in my class. Even my worst enemies agreed.
But woah, that's perfectly enough about me. I might play a main role, but this is Hero's story. He lived the hardships of being seperated from family and friends. He was rescued. So allow me to tell his story. I'm not telling you what happens, so don't skip to the end. I'll just tell you, it's a happy ending!

"Holly? Get up! You've slept in!"
My eyes open very slowly and then they look at the clock. 7:24am, on Monday 24th March. I'm ment to be up at having breakfast by now, but if I went to a party and didn't come back until late last night, that can't be helped. Groaning loudly, I get up from my toasty warm bed, get my dressing gown on and drag myself down the stairs and into the kitchen. Bruno greets me at the kitchen door. Oh, Bruno's my dog by the way. He's a greyhound, with dark brown fur, a white muzzle and long floppy ears. Unfortunatly, he drools a lot too, so Mum gets grumpy with him a lot. I quickly scratch Bruno behind the ears and go into the kitchen. In here, Dad's flipping pancakes and my little brother Sam is eating toast. Mum's not in so I suspect she's watching Daybreak in the living room. My little sister June is probably still asleep, cause' she's only 8 years old and her school starts at 9:30. My school starts at 8:45, but I catch a bus at 8:10am. Sam goes to the same school as me, but he's 12 and in year 7. I'm year 8.
"What do you want for breakfast, Holly?" Dad asks, putting down the frying pan. I stare longingly at the pancake, but Dad shakes his head. "No, that's for your mum. Why don't you have toast or something?" I sigh sadly, but get myself some toast. Bruno then bounded in, barking his head off. He seemed distressed and frightened. Dad tuted and sighed. "Get that mad dog in the garden." I whistled for Bruno whilst trying to unlock the back door. As usual though, June had been playing with the keys again and I was using the garage key to get into the back door. I eventually found the right key, unlocked the door and Bruno bounded out excitedly. Dad then called me back in, because my toast had popped out of the toaster. Hungrily, I gobbled up my toast, savouring every bite. Sam just sat and stared at me. He must of thought I was acting like Bruno when he hadn't had anything to eat. I could then hear Mum shouting, because I had half an hour to get changed for school. We were reading poems about firebirds today. I always long for school during spring, because we learn about my favourite animals. Sam makes fun of me, but I take no notice. What is the point of listening to your little brother? You'll probably find out that there is no point.
"MUMMY!" I fell off my chair when June screamed from her room. Probably yet another one of her nightmares. It normally is. Mum muted the TV and ran up the stairs, making shushing noises, despite the fact everyone was awake. Typical Mum. I finally finish my toast and go back upstairs to get changed.

Sam and I get out of the house within 25 minutes. Bruno comes too, but he has to go when the bus comes. All the dogs do that. My best friends Elise and Tom bring their dogs too. Tom has a old German Shepard named Tornado, because she makes a huge mess when Tom's parents just finish cleaning up. Tom calls her Tornado Dog. Elise just has a Yorkshire Terrier called Yorkie, and her brother owns a Dalamtion called K-9 (after the Doctor Who dog). Bruno is one of the only Greyhounds in Bromely, but I don't care. He's adorable in his own way.
Anyway, enough about the dogs. Back to the bus stop. As Sam and I got that, I realised that Elise wasn't here, just Yorkie, K-9 and her brother Patrick, who is in Sam's class. They are best friends, so that's fine. I greet Patrick. "Hi. Where's Elise?"
"She's ill. She came down with the flu." Patrick replied quietly. I nod and sit down on the bench. I was sort of relieved in a way that Elise was ill, because she's been acting weird recently and the other day she swore at me. I have always been more friendly with Tom, because we have similar personalities. He comes to my house to watch the firebirds, but he doesn't live on my street. Elise, on the other hand, has never been intrested in them, which upsets me slightly. She lives on my street, too.
I just sit there, talking to Bruno. He doesn't talk obviously, but he listens to me. I tell him what happens at school and my biggest secrets. Like that time in year 6 when I heard Tom saying to his mates that he liked me (!!!). He thinks that I don't know that, but only Bruno and I know. We're not going out, although several boys have asked me. I've turned them all down because I personally think I'm not ready. Bruno suddenly starts barking, but it's only because Tom and Tornado have arrived.
"Hi Holly." Tom greeted me. I just nod, and Bruno barks at Tornado. He does that to all dogs, he's famous for it. Everyone in Bromely knows me because of Bruno. It's actually quite funny, being popular because I have a noisy dog. I'm not teased though, otherwise they would have to deal with Sam, Tom and Elise. They will always stick up for me, thankfully. Elise just swears away while Sam and Tom beat them up. It's good to know I have friends like that. And a brother, of course. Tom and I sit there staring and smiling.
"Holls!" Sam yelled. I groaned and looked at him, but then I realise that the bus is coming. Quickly, I grabbed my bag, said goodbye to Bruno and got up, ready to get on the bus first. I enjoy bus journeys, because we mess around and sing to songs on my Ipod. The bus driver sometimes joins in, but he normally doesn't.
As I get on the bus, people beg me to sit next to them. Everyone on the bus never pulls fun out of me, thank goodness. As usual, I sat at the back with Tom and some other people. I am popular on my bus, which is good. I'm friends with everyone, even the year 13's, which are 4 or 5 years older than me. I'm not considered one of those cool girls with the cool schoolbag and the latest phone, thank goodness. I would hate to be that. Yes, I have an Ipod and a Blackberry phone with a keyboard, but I don't go around in £100 coats and carry designer bags. That is just showing off, in my humble opinion. The bus sets off and and a small year 7 girl starts to pass round some sweets. Just gummy worms, nothing special. I get offered several, but I'm trying to cut down on sweets as my New Year's resolution. I eat a couple, but not many. Elise will stuff her face, because she's ever so greedy, despite she's considered one of the cool girls. The only reason I am best friends with her is because I worked with her on some project in year 5 and I knew loads about it. I have been friends with Tom since year 4, and we ended up friends because I stuck up for him when some of the older kids were picking on him. I knew heaps of rude insults to call them, but when Mum found out she grounded me. Dad just smiled because I had helped someone doing it. I like helping people.

We'd just arrived at school when the suprises started to kick in. For a start, everyone was told to go to assembly just as we got off the bus. I am in a form of 35, including Tom. Elise is in a diffrent form. Basicly, the smarter people are seperated from the not-so-smart people. There are 4 forms for each year, making 24 forms total. We've got nearly 1000 people in the whole school, the biggest form being the smartest year 13's with 42 people! I long to be in this class, but I am too young at the moment. Year 8 is perfect for my age and my abilty.
Anyway, back to getting off the bus. We went straight to our lockers to put our bags away and get out things for lessons. Our lockers are tall and quite wide, with pegs inside to put away our bags and coats. There's even a little shelf to put your lunchbox or your wallet with your dinner money in. Our timetables are given to us to put inside our lockers. I had Art first lesson that day, then Drama. I suspect we are painting firebirds in Art and doing something weird in Drama. We have Music after Drama and then breaktime, which is only a measly 20 minutes! Lunch is an hour and an half though, which is good. Starts at 12pm and finishes at half 1. We used to have a lunch rota for who gets in first, but now it's first come, first serve. We can get 500 people in for lunch and just fit everyone in the hall. If we miss out, there's plenty to do. We have many lunchtime clubs, like gymnastics and art. There's even a small soft playarea, where there is a small club. The point of it, you ask? Imporving throwing, because we have these little castles and you throw paper or foam balls at the other team. Completly pointless, but hilarious.