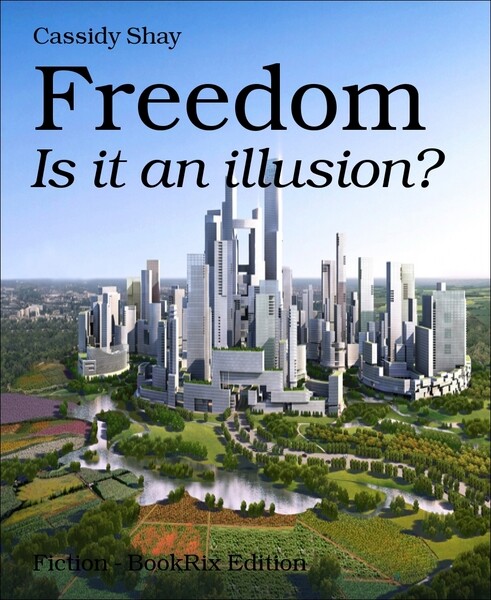 No one is going to believe me. That's all I can think about. Why would they ever believe me? It's so unlike me, and no one else has done it before... No. It's impossible. I barely believe it. And I'm the one here, feeling the cool air on my bare arms, making the goosebumps rise. Here I am, smelling the rain that's sure to come. I'm seeing the trees, the river down in the valley. I hear the birds chirch, and the trees rustle in the wind. But most importantly, I can taste freedom.

They'll all think that I was kidnapped. Maybe I died in a fire or a car accident, and they couldn't identify my remains. In our city of the Society, there are enough fires and car accidents every day to make my death possible. But what is not possible, in the eyes of the Society and the People, is that I escaped. I did it. Finally, after all the years of being trapped in a life that isn't my own, I am free. But the Society will hide that.

They will stage my death because it's easier than accepting that I got out.

I start to pick my way down the mountain. I'll have to find a place where I can stay for the night, and rest. I'll need plenty of energy for tomorrow, because I have to get as far away as possible. My goal is to put twenty miles in between me and the city. After that, they'll stop looking. After that, I am safe.

It's almost as if these woods have never been seen through the eyes of a human. The critters scurry when they see me, and the birds stop singing until I have passed. It's obvious that I don't belong here. But that's okay. It's not my final destination. Just my road. My way out.

Despite the certainty that they won't bother looking for me, I look behind my shoulders every few steps. If they do catch me, I will suffer. I'm determined not to get caught.

After about an hour of walking, I find a nice cave with a carpet of pine needles. I lay down, and am asleep in minutes.

I wake up in a cold room, on a steel table.

"She's awake!" I hear, somewhere to my left. A man appears at my right side.

He starts to laugh. "You are at the Center. You are not the first of the People to try to escape from us. But you didn't succeed."

I smile, momentarily ignoring the fact that I am in danger. "I did succeed. I may have been captured in the end, but I made it out. I got away from you. And in that way, I succeeded."

He snickers at me. "You didn't even get out of the city. It was all a dream, your mind playing tricks on you."

But I did. I know I did. The mountain... cave... trees, the birds. I can still feel the cold wind on my arms. He has to be lying. He has to be. It was too real, I was so alive. The mind can't make that up. It's not strong enough.

"Alright," he says to someone. I fel the table moving, so that I am vertical. It's the first time I notice the straps holding me down. The first man looks at another man, who is at a table to my left. He wheels the table closer, and I see knives, scissors, and surgical tools. "Good, good," he mumbles.

He turns to walk out the door, then stops. "You tried to escape us. You allowed yourself to believe that you succeeded. That was unwise. Now, you will be punished."