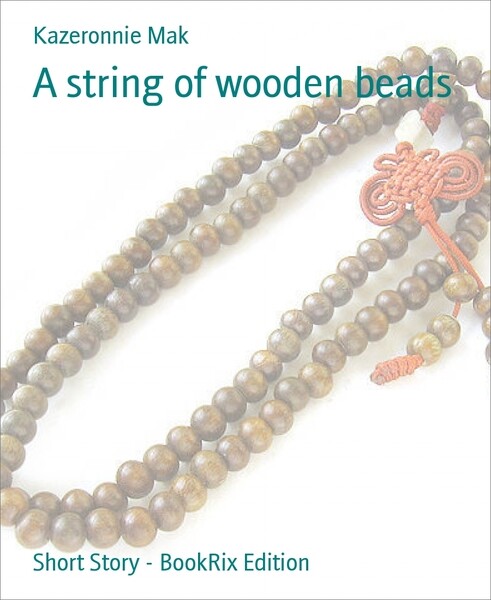 A temple stood in the center of a huge lake,
which stretched to the horizon.
The scenery was so beautiful and peaceful.
A great master and his twenty junior monks lived together and cultivated the wisdom of Buddha in harmony.
Hearsay a precious string of wooden beads had been worn by Buddha, which was enshrined in the temple.
They only had a small cockleboat to connect to the outside world.
And no one could approach the temple easily.
In that case, the string of Buddha beads was in safekeeping.

In such a picturesque atmosphere and the blessing of the Buddha beads, the junior monks concentrated on the learning and expected to complete the study as soon as possible.
Until one day, the great master assembled everyone and declared,
‘ The Buddha beads was lost !’
The temple was guarded twenty-four hours a day in rotation by the junior monks themselves.
No one could sneak into the temple secretly.
It was inconceivable that it had lost suddenly.
They all discussed that incident.
The worst was everyone from the monk became the suspect.

The great master consoled them and said, ‘ I don’t care about this matter. If only the one would admit his mistake and promise to treasure the Buddha beads. I’m willing to give it to him.’
Then, he gave them seven days for consideration.

No one confessed on the first day, nor the second day.
The mutual respect and trust between the monks were gone because of the suspicion. They talked no more.
The stifling ambiance had kept on to the seventh day.
No one stood out for the confession, yet.

The great master said, ‘ I’m glad that you’ve convinced me of your innocence. Even the temptation of the Buddha beads can’t get you, you’re resolute enough. Alright, the practice has come to the conclusion. You can go home tomorrow, then.’

The junior monks got ready to leave that morning. They had relief when they saw a blind monk knelt to pray before Buddha. They thought someone had confessed.
The true was revealed finally. They scowled at him.

After waved farewell to the others, the great master turned to the blind monk, ‘ Why are you staying ? Did you take the Buddha beads, didn’t you ?’
The young blind monk replied, ‘ Yes, the Buddha beads had lost. The heart of Buddha is still here, but. I just come for the self-cultivation of Buddha’s heart.’
‘So, you didn’t take it. Why are you sustaining all the suspicions ?
And let everyone misunderstand you ?’ asked the great master.
He said, ‘ [ THE SUSPICIONS ] has already hurt my heart, his heart and everyone’s heart in the last seven days. Someone had to sustain to resolve the suspicion.’
The great master took the legendary Buddha beads from his frock and put it on his neck.
He said, ‘ The Buddha beads is here !
You are the only one to comprehend the true meaning of - - - SUSTAIN ! ’


Life is a commitment.
We have to take upon the karma of our preexistence and the missions in this life.
Only when we benefit the people by paying a bit more, the others will suffer a bit less.
We take the responsibility to resolve the conflicts, reduce the unnecessary disputes and the contradictions.
Such people will get a better mental development, and have more freedom and opportunities in their entire lives.

This is the social spirit a must.

I always believe if everyone does a bit good deed, bit by bit,
we can make a harmonious world.