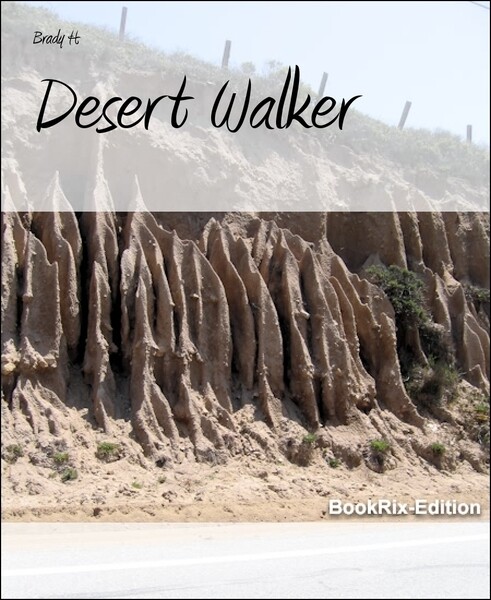 He walked accross the desert toward it. Toward what exactley? Who knows. Not even his companian next to his side or his stray dog on the other. He just walked and they followed. The footsteps were synchronized as well as the four legged animal. They walked and walked. Remmington held up his hand and stopped. His companion Riley halted as well as T-Rex the stray german shepered. He sat on his hunches and sniffed around Remmingtons feet, curious. Remmington knelt down to the sand under his feet and sniffed. He was on the right track. Being a desert walker was nothing to him. He had grown up in the desert. He had been on his own with his friend Riley since he was ten. Twenty years ago. One year earlier T-Rex joined the pack. Remmington found the canine wandering, sniffing the desert floor. Remmington had set his supper down next to his tent and grabbed a rope that sat next to the fire. He walked to the lost dog without fear and rapped the rope around T-Rex's neck. The big german shepered had no care in the world. Remmington figured it was a family pet at one time. Now Remmington got off his knees.
"This way," Remmington said and continued for another 200 yards when Riley asked, "where are we going Rem?" Stubbornly asking. Remmington just ignored his best and only friend. T-Rex ten yards ahead sniffing the ground. Remmington hadnt known where he was going until just an hour earlier. They have been traveling for days. Stopped at night and set up camp. T-Rex always slept an inch from Remmington. The 79 pound shepered nearly slept on top of him.
"I would like to know where we are going Rem," Riley asked more demanding. Remmington just shrugged and walked on. Sometimes he wished Riley would be more like T-Rex and not be able to talk. The dog never complained.
"You will know soon enough my friend. Patience, we are almost there. Hush for a spell would you?" Remmington said. Riley put his head down and shutup. T-Rex did the same, still sniffing the ground like he had a trail. He probably smelt where we are going, Remmington thought. Thats why he is twenty yards ahead. Remmington blew a whistle with his mouth and T-Rex shot his head up and looked back at Remmington and Riley yards behind. The dog could barely be seen from twenty yards because of the dust kicking up in the air. The dust storm was coming. T-Rex ran back to the two men with his toung hanging out. He leaped at Remmington, knocking the six foot five, 220 pound man over slobbering on his face. Remmington called him off. Obediatley, T-Rex back off and sat down next to him. Remmington got up and brushed himself off and kept going. The dust storm started coming in more. Remmington estimated two hours before it hits them. Remmington started picking up the pace. In his head he counted down until the dust storm. He must make his destination before it hits. T-Rex knew it as well. He still lay ahead of them, his head looking back at them with worry. Remmington only nodded to his dog to say he knew.
"Hey Riley, look at me," Remmington said haulting to a stop. Riley looked up at his friend and smiled. Wiped a tear from his cheek, "look, in about fourty minutes, something bad is going to happen, ok?" Remmington said putting his hand on Rileys shoulder. Remmington observed around him. The sun was starting to drop, the cold gust of wind blew in. The dust kicked around. Its just a matter of minutes before they would need the masks. That was the least of their worries. Riley nodded, cocking his head like T-Rex does when he doesnt understand something.
"Whatever you hear or see, you just keep walking. You got that?"
Riley looked confused. It was like talking to a wall, Remmington thought.
"Bad things Riley. Rarrr monsters. No good things, ok? You just ignore it. Dont respond or look in the direction of the voices" Remmington slapped Rileys shoulder and continued the journy. Remmington and Riley took out their masks. T-Rex was no longer visible. The dust was too foggy. They were on their own for the moment.

Five minutes into the full grown dust storm, the noises started being heard. Remmington looked over often at Riley to make sure he had listened to him. A good job so far. They walked ignoring the wailing sounds. Not just from the wind, but from beond the dust storm ahead. T-Rex was nowhere to be seen. Remmington couldnt see his own feet, let alone seeing a dog over twenty yards ahead of you. Remmington had no time to worry about T-Rex. Riley is what he was worried about. Remmington didnt find out Riley had down syndrome until their teens. Since then, he has taken care of him more the the dog.
"Rem, i cant see Rex!" Riley yelled. Rem heard him clearly through the evil sounds of the storm. Only it wasnt the storm making the noises.
"Hush Riley, ok? Rex will be alright. Hes a big boy and so are you. Rex knows where we are going. Keep movin" they picked up more pace. Remmington started to worry more. Not just for Riley, but himself. He didnt know exactley what was out there, but he knew it wasnt good. Stalking them waiting for their moment to spring. Remmington shook the thought out of his head and kept moving. He whistled to himself in the crazy wind.
One hundred yards later, Remmington stopped in his tracks suddenly. He reached his arm out and stopped Riley. Fifty yards in front of them they saw a black figure clear as day as if there were no dust storm. Remmington looked down at his feet and saw nothing, then back up at the figure. Still there. No facial featues on the black shadow shaped as a man. Remmington couldnt think of anything good that could come out of this. He motioned for Riley to keep walking. And they did. Ten yards. Fifteen yards, twenty. Before they could go any further, they stopped dead again. The black figure was still there but this time Rex was visible. No color, just his shadow. Rex was on its hunches facing the black figure like he was going to pounce. And he did. The figure did not move. Rex clamped onto the arm of the shadow man and hung on tight. The figure startedto spin trying to pry Rex off. No go. Thats when Remmington sprinted to the action, his hand reaching to his jacket. He threw himself at the shadow. Rex still hung on. Remmington got it off the ground and fell straight on top of the shadow. It was like fignting nothing, he thought. Rex let go, and the black figure and Remmington were wrestling on the ground. Remmington literally could not see the shadow, but he knew he was on top of it. Rem was grabbed by the neck and thrown off. Then kicked in the stomach. Thats when Rex lunged again. This time a black fist connected with Rex's jaw. He fell to the ground and wimpered. Remmington was still trying to catch his breath from the kick in the gut. He could not move.
The black figure took its attention off Rex and stood over Rem panting. Remmington could see the shadow clearly again. He had never been so scare in his life. The shadow came inches from Remmington's. Teeth appeared on the non existent face of the shadow. Dust flew all over them, the black figure still as clear as an HD screen. Remmington made his last effort to defend himself, trying to kick his monster off of him. The shadow felt nothing. Magically appearing in its hands was a knife. It hoisted it over his head and threw it down into Remmington's chest. Rem screamed. Blood flew from his mouth. His vision blurred. Then he felt weight come off of him. The black figure was no longer on him. It was next to him wrestling with nothing. Remmington thought he was hullucinating, until he heard the two gun shots. Remmington smiled. His teeth full of blood. The shadow dissapeard and the dust storm just like that. Remmington no longer had a hole in his chest but the blood was still there. He sat up. He still felt the powerful kick of the black shadow. His chest throbbed. He looked around him. It was only him. Riley and Tex were gone. Were they ever even there? Remmington thought. He inspected the blood on his shirt, then focused back up around him. He walked a few steps. He stepped on something. It crunched. He looked down and discovered bones. Skeleton bone. Human bones.
"What the he-" Remmington couldnt get anything out. Pools of blood lay around him. Remmington squinted in the distance at something. A hat? Rileys hat. Rem sprinted to it and picked it up and held it in his hands. A tear trickled down his cheek. He wiped it off with the back of his sleeve, and put Riley's hat on his own head.
"Almost there..." He walked straight into the sunset whistling...