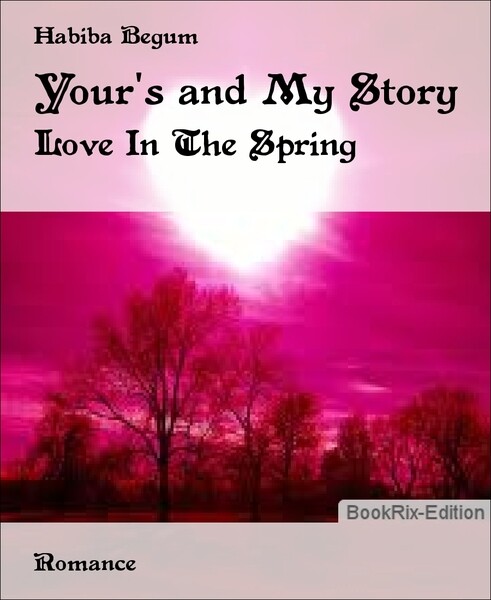 Love In The Spring

Tania ran down the road as fast as the wind. She puffed heavily and her lungs felt like they were going to burst out any time soon. She knew that nothing could stop her. She had to stop her love before it was too late. What waits for him in that barn, only she knew? If only she hadn’t gotten angry with him. She pushed people out of way in the streets. Her hair flew over her face but she didn’t care. The only thing she had in her mind was her love Jason. He was everything to her and she did not want anything to happen to her. How could that crazy girl do something like this to him? Samantha was a bit mad and people did not know it. Even the teachers did not know this, but Jania did. Tania knew her scary truth. She had escaped from a mental asylum from America and pretended she was normal. Tania knew that she was crazily in love with him and would do anything to get him, maybe even kill him so others couldn’t have him. If she couldn’t have him then she would make sure that know one would have him. She manipulated him into going to the barn where she would burn him alive in there. There were only moments to spare for Jania to get there as soon as possible. This crazy scary situation happened only after Jania met Jason in a high school two months ago.

It was summer and it was very hot indeed. Tania sat outside of her school with her friends Christy and Amanda on the green grass. She stared at the ground and picked the grass.
“I’m so thirsty, why don’t we get an ice cream?”
Amanda turned over her book and ignored Tania who was very interested in her book. Tania frowned and turned over to Christy who was looking at some book too.
“Urgh, what are you both reading?”
Amanda giggled, “I’m reading a romance novel. The heroine just kissed the hero and then his neck. How romantic” she giggled again and carried on reading. Christy took out a pen and wrote something in her book, “Okay I can show you now. I’ve finished. Right, you know that this school votes yeah? I am sure you know they pick the three hottest guys in the school and post it in the newspaper every year and guess who is number one? Jason Uehera.”
Tania looked confused, “Uehera? Never heard of him”
Amanda closed her book and placed it in her handbag. She then took out a note book. In that book was the data of every guy that went to that high school for example; age, date of birth everything, “yeah. He’s half Asian. His dad is from Asia and his mom is from England. His dad chose his second name and his mom the first. That is why he has an Asian surname. Got it now?”
Tania thought to herself. She had never seen Jason before. He was in class 10 and she was in class 5. Although he was famous in that school for his naturally handsome looks Tania had never seen him around, so she did not know who he was, “Okay I want to see this Uehera guy. Everyone is always talking about him. I mean every day some girls in my class always say things like, “oh my gosh Jason is so cute, he looked at me today I can’t believe it”…
Tania wanted to see him but never had the chance to. Why is that?
Christy got up and brushed her self off. She wore a blue flowery dress and did not want to get it dirty.
“Right come on, we have revision to do, our finals are two weeks away”
Amanda was not very good at English but wanted to make sure that she passed this year so that she does not have to re do English next year.
“Okay we can go to the library as I have tons of revision to do, Tania are you coming?”
Tania was very good at English and didn’t need to revise as she already knew everything but she needed help in Math’s. That was not her strongest subject. She didn’t really understand Math’s very well.
“No thanks, you guys go ahead. I have to go up stairs and collect my folder from the lockers”
Amanda and Christy just smiled and waved to Tania.
“Okay then ill text where to meet at break”
Tania wondered to herself thinking what Jason may look like. He must be very handsome as all the girls are crazy for this guy, but if he so famous how come she doesn’t know who he is.
Tania picked up her side bag and pushed the handle over her shoulder and left. On her way up the stairs someone had dropped juice on one of the steps. Tania was quite absent minded and didn’t even notice the juice…so you can guess what will happen next. Her right foot slipped on the juice and fell backwards. Both her arms were flying and she dropped books from her hand. She was just about to fall on her back when someone caught her. Tania kept her eyes closed and did not even dare to open it. She was now safe in someone’s arms but whose? A gentle warm voice spoke out.
“Don’t worry I caught you. It’s okay you are fine”
Tania opened her eyes slowly and could see a handsome guy staring back at her. he didn’t smile but just looked into her eyes. There was a moment when Tania couldn’t even smile because she was lost in his dreamy hazel nut eyes.