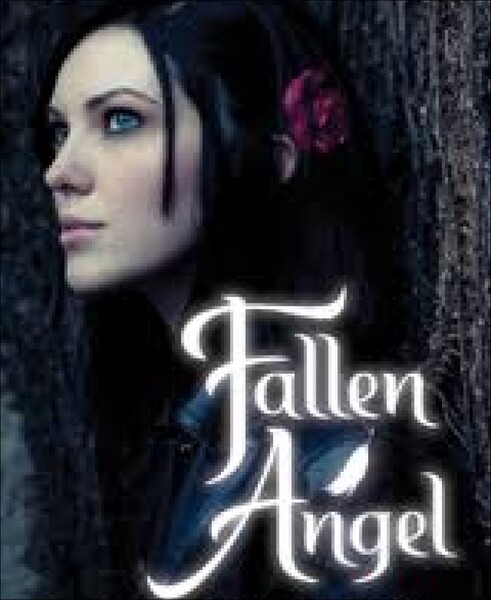 It was midnight, Camile was wandering the streets looking for some trouble to get into. It was cold. She stuffed her hands into her leather jacket and exhaled. Suddenly she heard a loud noise coming from a near by house. She smiled her sinister smile.Finally, some good news

She thought as she walk to the house. She tried to walk up the stairs, but something wouldn't let her in and she knew what it was. She looked around the house for a God's eyes. "Were are you you little fuck?" She asked. she found the God's eye in the middle of the porch ceiling. She rolled her eyes. "Way to go big guy." She said looking up at the sky. The only place she knew fallen angels were alowed to go were hardcore parties and she knew where one just might be. She rolled back her shoulders to where her black wings. She flew to the sky like a bird.
There was this party on the Ave were goths and people with no education went. It was hot. Metal Music played in the backround When Camile stepped in about three boys started dancing all over her, But she wasn't here for the guys, mostly, she was here for the booze. When she got to the bar stand she imediatly caught the attention of the bar tender. "May I help you?" He asked. He looked about in his late twenties maybe younger. Camile smiled. But then she looked at his name tag: Pete. she exhaled and rolled her eyes. "Let me just get a beer." She said. To bad, he was really cute, but his name just had to be Pete, why not Zane or Derek?

She asked her self. The bar tender came back with a glass full of beer, he smiled. "Here you go, fresh beer." She smiled a fake smile and took her beer. She looked up from her golden drink. the bar tender was still there, smiling.
She put her glass down and exhaled. "Can I help you?" She asked a little annoyed. She chuckled. "Yeah, aren't you a little young to be drinking?" He asked. She didn't blame him, she origanally looked like a eighteen year old girl. Camile exhaled. "Look I came here to have fun so if you don't mind." Camile drink more of her beer. "Oh, I see your a party girl." He said. Camile nodded. The bar tender leaned forward. "Listen, Come with me and it'll be the party of your life." Camile smiled. Not only was this guys annoying and his name was Pete, but he was like a hundred years younger than her. She shook her head, "I don't think so, Pete."

The next day, Camile woke up to the sun in her face, She noticed she was in a bed. The sheets were cold from the open window. She sat up and looked to her right. Ther was a shirt on the floor. It looked familiar. She picked the shirt off the floor. It had a name tag, She covered her mouth and scoffed when she read it: Pete. She slowly looked over her shoulder to where Pete was lying. She shook her head. "Bastard." she whispered. she looked at his bare chest and the she lifted her eyes brow. And then lift the covers. He was naked. obviously. She was Naked to. When she found her clothes, she imediatly got dressed. She found Pete's wallet and took it. "This'll teach you never to fuck with me." she whispered. she krept out of the room and went down stairs, looking for Pete's Car keys. She looked in the closet to where she found a whole supply of Liquor and Tequila. She smiled and took two bottles each.
She found the keys in the sofa. She made sure she didn't leave anything. She left out the door with her bottles and the keys. Pete's car was a silver mercedes bens. She smiled. "Finally, something right." She said. she got in the car and put the key in ignition and drove off. She put the radio on and played lady Antibelum's I Need You Now. She found a pack of newport cigarretes in the glove compartment and lit them up, in minutes, the car was full of smoke. She was getting in the mood of the song when something fell from the sky and dropped right in front of the car, The tires made a skidding sound as she stopped. Her jaw dropped, making her cigarrete fall out. Her eyes rested on about five people wearing all black, two were girls and the other three were boys who wore trench coat that came to there knees. The two girls were Blondes. and two of the three boys had black and brunette hair. But the last boy who was padding himself down from the fall, had beautiful long hair that came to his waist. Camilla was snapped out of her day dream when they came to approach the car. She quickly buckled her seatbelt and got out of the car and began to walk backward. As the group got closer, Camilla could tell things were headed for the worst. "You there, fallen angel." one of the blondes said. Camilla played stupid and looked behind her. "Me?" She pointed to her chest. "You have been ordered to side with the light by God and his power." She said. Camilla rolled her eyes and stepped from behind the car. "Not this shit." She whispered. "Ok, so now what, you gonna take me in for questioning." She laughed sarcastically. The Angels all shared looks and laughed. "Even worst." The guy with the black hair said. "Look, I would love to play Trench coat cops with you, but I have somewhere to be." Camilla began to open the door when the brunette sped up beside her and shut the door. His hand was to her neck. Ok, ok, no need to get rashonal." She siad holding her hands up to surrender. "Wow, as if this wasn't easy enough." The blonde said. Before Camilla could speak again, the other blonde hit her in the head with a blunt object, knocking her out. Cold.

When camilla awoke, she was surrounded by darkness. the only thing that was providing light wass the moon in a small window above her. She noticed she couldn't move. Her ankles and wrist were tied up, even her mouth was tied. She also a chair next to her, she didn't bother to sit in it becusae it would be painful to move, she knew they broken her wings. So she just sat against the concrete wall. She started laughing. She thought this was just a joke or a test from the big guy. She just shook her head and laughed. Suddenly, she heard footsteps, they were getting closer and closer by the second. Then she heard the unlocking of a door of a gate. She now knew this wasn't a test nor a joke. A dark figure appeared in the poorly lit cell. When he showed his face in the moonlight, Camilla soon reconized who it was, it was the guy with the long hair, he had a knife in his hand. Camilla Started figiting but he grabbed her hand. "Shh, don't worry, I'm gonna save you." He said, his voice was deep. If only Camilla's mouth wasn'y tied. He cut through the ropes on her ankles and her wrist, but when he untied the rope around her mouth, she snatched the knife from him and turned it on him. He put his hands up to surrender, and backed up. "Hey, hey, hey, I said I wasn't gonna hurt you." He said. "Who are you, were am I." He put his hands down and grabbed her hand and took the knife.
"We don't have time for this, If you wanna live we have to leave now." He grabbed her other hand and guided her out of the cell. The place looked like a midieval cave, there wer stick lit on fire to be light, and the ceiling was actually rock. The two stopped at a dead in with only two exits. "Well, what are you waiting for?" She asked him. He looked both ways. "Uh, by any chance, can you fly?" He asked, stupid question considering her wings were broken. "No, you broke my wings remember." She said a little annoyed. "Damn, we're gonna have to go through the foyer." He said.
He leaded her through the halls the midieval cave was starting to look like a house. It was a house. In the foyer, the fallen Angels were,