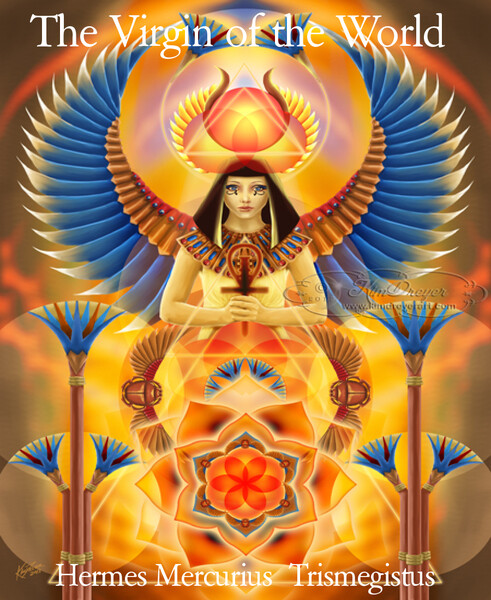 The Virgin of the World


HAVING thus spoken, Isis first pours out for Horos the sweet draught of immortality which souls receive from the Gods, and thus begins the most holy discourse. Heaven, crowned with stars, is placed above universal nature, O my son Horos, and nothing is wanting to it of that which constitutes the whole world. It is necessary, then, that all nature should be adorned and completed by that which is above her, for this Order could not proceed from below to above. The supremacy of the greater mysteries over the lesser is imperative. Celestial order reigns over terrestrial order, as being absolutely determined, and inaccessible to the idea of death. Wherefore, the things below lament, being filled with fear before the marvellous beauty and eternal permanence of the heavenly world. For, indeed, a spectacle worthy of contemplation and desire were these magnificences of heaven, revelations of the God as yet unknown, and this sumptuous majesty of night illumined with a penetrating radiance, albeit less than that of the sun, and all these other mysteries which move above in harmonious cadence, ruling and maintaining the things below by secret influences. And so long as the Universal Architect refrained from putting an end to this incessant fear, to these anxious investigations, ignorance enveloped the universe. But when He judged good to reveal Himself to the world, He breathed into the Gods the enthusiasm of love, and poured into their mind the splendour which His bosom contained, that they might first be inspired with the will to seek, next with the desire to find, and lastly with the power to readjust.


Now, my wondrous child Horos, all this could not happen among mortals, for as yet they did not exist; but it took place in the universal Soul in sympathy with the mysteries of heaven. This was Hermes, the Kosmic Thought. He beheld the universe of things, and having seen, he understood, and having understood, he had the power to manifest and to reveal. That which he thought, he wrote; that which he wrote, he in great part concealed, wisely silent. and speaking by turns, so that while the world should last, these things might be sought. And thus, having enjoined upon the Gods, his brethren, that they should follow in his train, he ascended to the stars. But he had for successor his son, and the heir of his knowledges, Tat, and a little later, Asclepios, son of Imouthè, by the counsels of Pan and Hephaistos, 1 and all those for whom sovereign Providence reserved an exact knowledge of heavenly things.


Hermes then justified himself in the presence of those who surrounded him, in that he had not delivered the integral theory to his son, on account of his youth. But I, having arisen, beheld with mine eyes, which see the invisible secrets of the beginnings of things, and at length, but with certainty, I understood that the sacred symbols of the Kosmic elements were hidden near the secrets of Osiris. Hermes returned to heaven, having pronounced an invocatory speech.


It is not fitting, O my Son, that this recital be left incomplete; thou must be informed of the words of Hermes when he laid down his books. "O sacred books," he said, "of the Immortals, ye in whose pages my hand has recorded the remedies by which incorruptibility is conferred, remain for ever beyond the reach of destruction and of decay, invisible and concealed from all who frequent these regions, until the day shall come in which the ancient heaven shall bring forth instruments worthy of you, whom the Creator shall call souls."


Having pronounced upon his books this invocation, he wrapped them in their coverings, returned into the sphere which belonged to him, and all remained hidden for a sufficient space.


And Nature, O my Son, was barren until the hour in which those who are ordained to survey the heavens, advancing towards God, the King of all things, deplored the general inertia, and affirmed the necessity of setting forth the universe. No other than Himself could accomplish this work.


"We pray Thee," said they, "to consider that which already is, and that which is necessary for the future."


At these words, the God smiled benignant, and commanded Nature to exist. And, issuing with His voice, the FEMININE came forth in her perfect beauty. The Gods with amaze beheld this marvel. And the great Ancestor, pouring out for Nature an elixir, commanded her to be fruitful; and forthwith, penetrating the universe with His glance, He cried, "Let heaven be the plenitude of all things, and of the air, and of the ether." God spake, and it was done. But Nature, communing with herself, understood that she might not transgress the commandment of the Father, and, uniting herself to Labour, she produced a most beautiful daughter, whom she called Invention, and to whom God accorded being.


And having differentiated created forms, He filled them with mysteries, and gave the command of them to Invention.


Then, not willing that the upper world should be inactive, He saw fit to fill it with spirits, in order that no region should remain in immobility and inertia; and in the accomplishment of His work He used His sacred art. For, taking of Himself such essence as was necessary, and mingling with it an intellectual flame, He combined with these other materials by unknown ways. And having achieved by secret formulas the union of these principles, He endowed with motion the universal combination. Gradually, in the midst of the protoplasm, glittered a substance more subtle, purer, more limpid, than the elements from