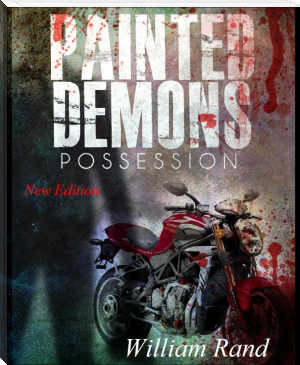 When John Hardin’s brother, a priest, apparently commits suicide, he goes to his brother’s parish in Philadelphia to find out the truth of what happened. The events of the suicide are revealed to him by the pastor and by a possessed man through a series of short stories.

Painted Demons presents a series of violent confrontations between people and elements they see as evil. The reader may not always agree with those judgments; where a character names evil, the reader may see justice, sickness or blind authority. But before that realization, the reader must often wait to see from which character or source the horror will come. In each case, normal people are introduced leading average lives; but their existence becomes threatened by something or someone they have previously known as sane and safe: an elevator, a city bus, a bit of trivia, a parent, a spouse. The stories always encase a vein of normalcy, Character and relationships become the backbone of each story and contrast with the fast plot, violence, and horror which develop to drive each story to its climax.

Along with the horror, a main goal of the collection is the surprise of unpredictability from story to story. Most of the tales deal with the supernatural, but not all. They are split between first and third person narrators, but any story is as likely to be told from the point of view of the evil or predator as from the intended victim. Sometimes the evil wins, sometimes not. And once or twice the reader may not be sure. Some stories have no descriptions of gore, while others rip and bleed. But they are all stories about people—plain but very disparate people—caught suddenly in desperate, terrifying situations.

We are publishing great books, and we need people who love reading
You never know what you will find!!!
Link: https://goo.gl/ZWdYJV

download the newest graphic novels for free on this site:

this is shit man