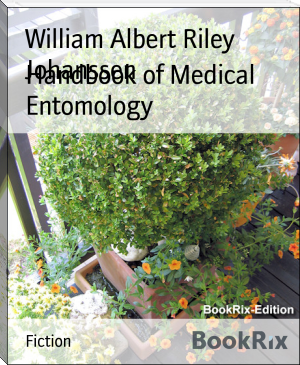 *** START OF THIS PROJECT GUTENBERG EBOOK HANDBOOK OF MEDICAL ENTOMOLOGY ***


Produced by Bryan Ness, Iris Schimandle, Brownfox and the
Online Distributed Proofreading Team at http://www.pgdp.net
(This file was produced from images generously made
available by The Internet Archive/American Libraries.)

Transcriber's Note: Barring some obvious typos, the text has been left
as printed. Discrepancies identified are listed at the end of the text.


[Illustration: Some early medical entomology. Athanasius Kircher's
illustration of the Italian tarantula and the music prescribed as an
antidote for the poison of its bite. (1643).]

BY THE COMSTOCK PUBLISHING COMPANY,


The Handbook of Medical Entomology is the outgrowth of a course of
lectures along the lines of insect transmission and dissemination of
diseases of man given by the senior author in the Department of
Entomology of Cornell University during the past six years. More
specifically it is an illustrated revision and elaboration of his "Notes
on the Relation of Insects to Disease" published January, 1912.

Its object is to afford a general survey of the field, and primarily to
put the student of medicine and entomology in touch with the discoveries
and theories which underlie some of the most important modern work in
preventive medicine. At the same time the older phases of the
subject--the consideration of poisonous and parasitic forms--have not
been ignored.

Considering the rapid shifts in viewpoint, and the development of the
subject within recent years, the authors do not indulge in any hopes
that the present text will exactly meet the needs of every one
specializing in the field,--still less do they regard it as complete or
final. The fact that the enormous literature of isolated articles is to
be found principally in foreign periodicals and is therefore difficult
of access to many American workers, has led the authors to hope that a
summary of the important advances, in the form of a reference book may
not prove unwelcome to physicians, sanitarians and working
entomologists, and to teachers as a text supplementing lecture work in
the subject.

Lengthy as is the bibliography, it covers but a very small fraction of
the important contributions to the subject. It will serve only to put
those interested in touch with original sources and to open up the
field. Of the more general works, special acknowledgment should be made
to those of Banks, Brumpt, Castellani and Chalmers, Comstock, Hewitt,
Howard, Manson, Mense, Neveau-Lemaire, Nuttall, and Stiles.

To the many who have aided the authors in the years past, by suggestions
and by sending