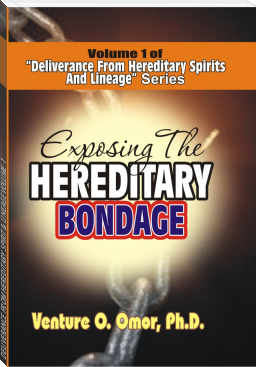 EXPOSING THE HEREDITARY BONDAGE is volume 1 in a series of two volumes on “Deliverance From Hereditary Spirits and Lineage” by best-selling author Dr. Venture O. Omor. This book and the second volume are both spiritual warfare materials with emphasis on “TRANSFERENCE OF SPIRITS”.

In this volume the author assures Believers in Christ that all yokes or bondage of spirits, habits, characters and even sickness which were transferred or passed from one generation to another and now inherited by you..CAN BE DESTROYED AND TOTALLY SET FREE IN THE NAME OF JESUS! Because it is written, “wherefore God also hath…given Him a name which is above every name; That at the name of JESUS every knee should bow,…” – Phil. 2 vs. 9-10.