Arguments Of Celsus, Porphyry, And The Emperor Julian, Against The Christians

Also Extracts from Diodorus Siculus, Josephus, and Tacitus, Relating to the Jews, Together with an Append Von: Thomas Taylor 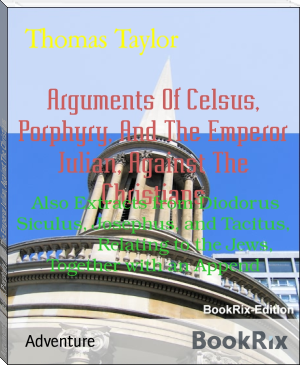 Sir Thomas Taylor, 2nd Baronet (1657–96), of Park House, Maidstone and Shadoxhurst, Kent, was an English politician.
He was a Member (MP) of the Parliament of England for Maidstone 1689-1696.
"I HAVE often wished," says Warburton in a letter to Dr. Forster, October 15, 1749, "for a hand capable of collecting all the fragments remaining of Porphyry, Celsus, Hierocles, and Julian, and giving them to us with a just, critical and theological comment, as a defy to infidelity. It is certain we want something more than what their ancient answerers have given us.