Dialogue Of Comfort Against Tribulation 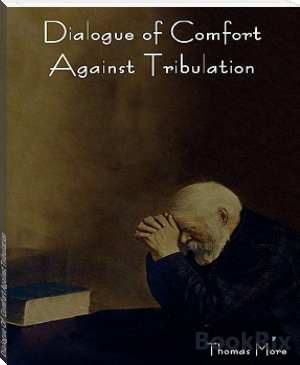 Sir Thomas More (/ˈmɔr/; 7 February 1478 – 6 July 1535), known to Roman Catholics as Saint Thomas More,[1][2] was an English lawyer, social philosopher, author, statesman and noted Renaissance humanist. He was an important councillor to Henry VIII and Lord Chancellor from October 1529 to 16 May 1532.[3] More opposed the Protestant Reformation, in particular the theology of Martin Luther and William Tyndale. More also wrote Utopia, published in 1516, about the political system of an ideal and imaginary island nation. More later opposed the King's separation from the Catholic Church and refused to accept him as Supreme Head of the Church of England because it disparaged papal authority and he also opposed Henry's marriage to Anne Boleyn. Tried for treason, More was convicted likely due to perjured testimony and beheaded.

Pope Pius XI canonised More in 1935 as a martyr of the schism that separated the Church of England from Rome; Pope John Paul II in 2000 declared More the "heavenly Patron of Statesmen and Politicians".[4] Since 1980, the Church of England has remembered More liturgically as a Reformation martyr.[5] In 2002, he was placed at number 37 in the BBC's poll of the 100 Greatest Britons.[6]