History Of Friedrich Ii. Of Prussia, Vol. Xviii. (Of Xxi.) 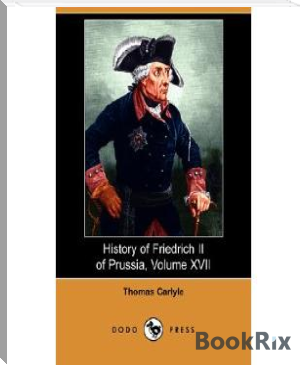 Thomas Carlyle (4 December 1795 – 5 February 1881) was a Scottish philosopher, satirical writer, essayist, historian and teacher during the Victorian era.[1] He called economics "the dismal science",[2] wrote articles for the Edinburgh Encyclopedia,[3] and became a controversial social commentator.[1]

Carlyle's strict Calvinist parents expected him to become a preacher, but he lost his Christian faith while attending the University of Edinburgh. He continued to believe in God,[4] and Calvinist assumptions remained with him throughout his life. His combination of religious temperament with loss of faith in traditional Christianity made Carlyle's work appealing to many Victorians who grappled with scientific and political changes that threatened the traditional social order. He brought a trenchant style to his social and political criticism, and a complex literary style to works such as The French Revolution: A History (1837). Dickens used Carlyle's work as a primary source for events of the French Revolution in his novel A Tale of Two Cities.