Compilation of the Messages and Papers of the Presidents Section 2 (of 2) of Supplemental Volume: Theodore Roosev 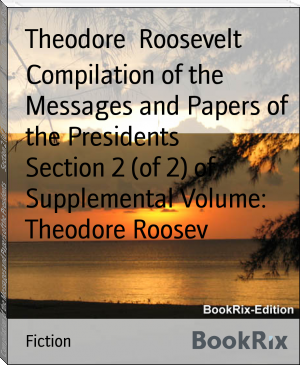 Theodore Roosevelt Jr. (/ˈroʊzəvɛlt/ ROH-zə-velt;[a] October 27, 1858 – January 6, 1919), often referred to by his initials TR, was an American statesman, author, explorer, soldier, naturalist, and historian who served as the 26th President of the United States. A leader of the Republican Party, he was the spokesman for the Progressive Era. A sickly child whose asthma was debilitating and nearly fatal, Roosevelt regained his vigor, and embraced a strenuous life. He integrated his exuberant personality, vast range of interests, and world-famous achievements into a "cowboy" persona defined by its exultant masculinity. Home-schooled, he became a lifelong naturalist at an early age. Roosevelt attended Harvard College, where he studied biology, boxed, and developed an interest in naval affairs. His first of many books, The Naval War of 1812 (1882), established his reputation as both a learned historian and a popular writer. He soon entered politics, winning election to the New York State Assembly in 1881. He became the leader of the reform faction of the Republican Party in the state.