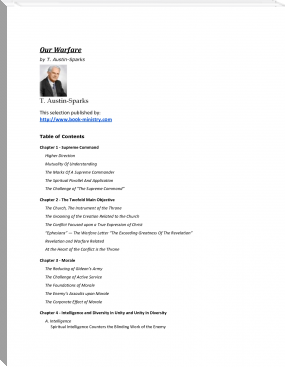 Chapter 1 - Supreme Command
“For though we walk in the flesh, we do not war according to the flesh (for the weapons of OUR WARFARE are not of the flesh, but mighty before God to the casting down of strong holds)” (2 Corinthians 10:3–4).

"Although the Bible contains so much about the warfare of God’s people, and although we as His people may have had much teaching on the subject, it would probably be true to say that we have largely failed to apply the instruction we have received—to situations, to circumstances, to happenings; and that this accounts for many of our troubles, individually and collectively. While there is much for which the enemy is not to be blamed as the first cause, but which is due rather to our own foolishness or un-guardedness — our own faults — yet there is still very much more that is attributable to his interest, to his interference, to his action. Our need today is not so much to be informed as to the reality of spiritual conflict — we know that to be a fact! — as to be more alive to the extra factor lying behind situations, the situations with which we are trying, with so little success, to cope. We try to cope with things, as though they were everything, and so often we miss their real underlying significance.

"What we need, therefore, is understanding and wisdom —for wisdom means the ability to apply knowledge —wisdom as to this whole spiritual campaign, our warfare and its principles. But let me say at once: we are not embarking upon a study of Satan, or demons, or demonology! It is a very favorite trap of the enemy to get people occupied and obsessed with himself, and, by the help of God, we are not going to fall into that. Our object is to study spiritual warfare itself, as viewed mainly from the Lord’s side."
T.A-S.