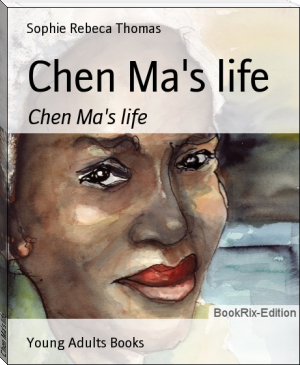 Once there was an elderly widow, Chen Ma, who lived with her only son inside a forest in the Shanxi Province. Her son was one of the tiger hunters licensed by the local magistrate, following the same profession of his father and grandfather before him. His share of the profits from the sale of tiger skins, meat and bones was sufficient to keep the small mud hut well provisioned for himself and his old mother.

All was well until a particularly bitter winter. During a snowstorm, Chen Ma's son was separated from his fellow hunters and became food for a hungry tigress.

After her initial shock and grief subsided, Chen Ma took stock of her own utterly desperate situation -- an old woman left all alone. She went and implored the magistrate to provide her with compensation for the loss of her son, who was her only source of support. The magistrate decreed that henceforth, she would have a small share of profits from the kill of each tiger by the hunters. Needless to say, his decision was not taken well by the hunters, who had plenty of mouths of their own to feed -- both old and young.


So, when the hunters succeeded in killing the tigress that ate Chen Ma's son, they decided not to give her a share of the profits. Instead, they brought her the tigress' newborn cub. He was a small quivery ball of golden fur with wobbly legs and toothless gums. The rope they tied around his neck was so tight that it was practically choking him. Instantly, Chen Ma's heart went out to this helpless creature, whose jade-green eyes were glistening with tears.

After the hunters left, the tiger cub wobbled to where Chen Ma sat and lay at her feet. She bent down to rub his ears and he licked her shoes with his soft tongue.

The elderly widow looked at the tiger baby and sighed. "They told me to butcher you, to salt and smoke your flesh for my meat supply. Your skin would make warm boots for my feet; your bones are good for making Tiger Bone Wine to ease the pain in my joints. But oh, how can I bear to kill you? You are so young and vital, while I am so old and frail."


And so, Chen Ma untied the rope from the little tiger's neck and fed him a paste of cooked roots with her fingers. Her son had a good supply of grains and roots in the attached shed and she planned to stretch the food out to last the winter.

When the store of the firewood was running low, Chen Ma was unable to keep her bedroll on top of the kang warm (a kang is a bed base built of bricks with space for a small fire). So she slept curling against the baby tiger, whose soft fur was cozy and warm.

Once ever so often, women from nearby villages would bring sewing for Chen Ma to do. She was very handy with a needle. They paid her for her labor with dried venison and small sacks of grain. At first they did not find the little tiger's presence alarming; he was no bigger than a piglet. However, when spring came, he had grown into the size of a calf, showing a full set of teeth and claws. The women told their hunter husbands and the men came to kill the young tiger.

Chen Ma armed herself with her son's hunting spear and threatened to gut anyone who dared to harm her beloved pet.

"I've lost both husband and son. This tiger is the only companion I have now. I shall go to the magistrate and request to adopt him as my son."

The hunters thought the old woman had become mad and jeered at her. But since she was so determined, they dared not kill her tiger without the magistrate's permission. So they followed Chen Ma and her tiger all the way to the official's judgment hall.

"Venerable Mother," said the magistrate. "Your request is most unusual. Are you not afraid that some day the tiger might revert to his wild nature and devour you?"


"Honorable sir," replied the old widow with tears in her eyes. "What is there to fear? I have lived too long. The only worry I have now is being left utterly alone. Please let me adopt this young tiger, for he has become like a son in my affections."

The kindly magistrate did not have the heart to refuse such an ancient woman's pleading. So he had his assistant draw up a document for the tiger's adoption.

In order to protect the tiger from the hunters' arrows and spears, the magistrate ordered a large copper pendent made to hang around the beast's neck. The words "Fu Chee" were engraved on the pendent meaning Tiger Son. To show her deep gratitude, Chen Ma knelt down in front of the magistrate and knocked her forehead three times. Then she led Fu Chee back to their home in the forest.

By next winter, Fu Chee had grown into his maximum size. Chen Ma's hut was in danger of collapsing whenever the tiger became playful. Reluctantly, she allowed Fu Chee to make his home inside a cave nearby.
However, the affectionate tiger came back to visit his adopted mother often, always bearing a gift in his mouth -- a dead deer or a large piece of tree branch. Also, he still liked to lick her shoes and to have his ears rubbed. Chen Ma's needs were being cared for just as if her natural son was still alive!
After Chen Ma died at the ripe old age past one hundred, the hunters noticed Fu Chee guarded her tomb nightly. They left him unmolested as he had never attacked any humans or domestic animals. This went on for a number of years and then one day the tiger was seen no more.


Out of deep respect and admiration for the filial tiger son, the hunters erected a small stone monument at Chen Ma's tomb with Fu Chee's story engraved on it. Henceforth, Fu Chee became a household legend in that part of Shanxi Province.

Hi my name is Sophie Rebeca Thomas and im 11 i know my book isnt long but its good for my age is it well im proud of my book anyway so if u like it email me sophiethomas1962@hotmail.co.uk thanks